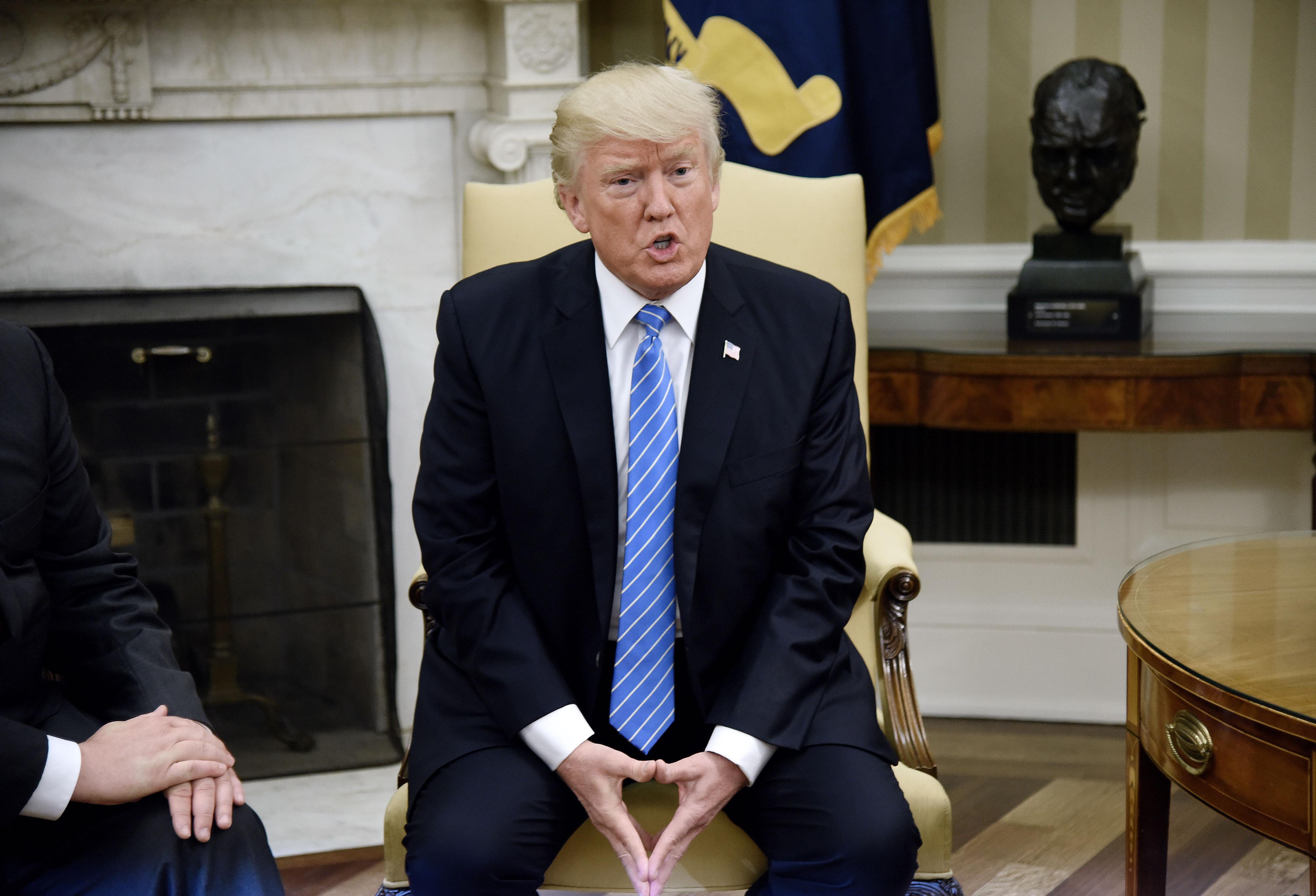 When Ukrainian President Petro Poroshenko visited the Trump administration this week, he lauded the U.S. for continuing to apply pressure on Russia for violating his country's territorial sovereignty and stood by the framework of the Minsk Agreement to halt the fighting in the Donbass region of Ukraine. This comes as U.S.-Russian relations have only become more tense in recent days.

Presidents Trump and Poroshenko discussed preserving Russian sanctions and possibly ramping up those sanctions until Russia adheres to the Minsk agreement, the Ukrainian president said. He called the sanctions "extremely important" and claimed it was "no coincidence" that the U.S. reinforced sanctions on 38 individuals and companies this week while he was in Washington.

Treasury Secretary Steven Mnuchin spoke about the sanctions this week, describing them as an effort to "maintain pressure on Russia to work toward a diplomatic solution." And as Ukraine celebrated the expanded sanctions, Russia was not pleased. Russian Foreign Minister Sergei Lavrov called the sanctions "regrettable" and accused the U.S. of "Russophobia."

Earlier this month, Secretary Tillerson suggested Russia and Ukraine might agree to utilize a structure other than the Minsk agreement. He has said he doesn't want the Trump administration to be "handcuffed" to the Minsk agreement, should an alternate vehicle for dialogue emerge. But at this point, neither Russia nor Ukraine has indicated that an alternative is being discussed. And after the Washington visit, the Ukrainians indicated that they want to see Minsk implemented.

Poroshenko does "not consider it necessary to change the Minsk and Normandy formats of negotiations," he said in remarks at the Ukrainian embassy in Washington that were later distributed to reporters.

The Ukrainian president leaves Washington feeling that his message was heard by the administration, and that Ukraine has the backing of Mr. Trump.

"Earlier it was about the bilateral support in the U.S. Congress and Senate, whereas now, we can confidently speak of the executive authorities, namely the administration of President Trump," Poroshenko told Ukrainian reporters.

This has had a detrimental impact on U.S.-Russia relations. Russia cancelled the planned visit of a top State Department diplomat over the rollout of new sanctions against Russia-backed separatists. Under Secretary Tom Shannon, a career diplomat, planned to visit Russian Deputy Foreign Minister Sergey Ryabkov in St. Petersburg on Friday. They had planned to discuss some of the irritants in the U.S.-Russia relationship, including the Russian compounds in the U.S. that were shut down during the Obama administration.

"We regret that Russia decided to turn away from an opportunity to discuss bilateral obstacles that hinder U.S.-Russia relations," wrote State Department spokesperson Heather Nauert in a statement. She added that the sanctions "didn't just come out of nowhere." They are, she said, a result of Russia's violation of Ukrainian sovereignty.

"Our sanctions related to Crimea will not be lifted until Russia ends occupation of the peninsula," Nauert continued.

But Russians show no signs of curbing their aggression. On Thursday, the State Department expressed deep concern for the "alarming violence" of Russian-led separatists in Ukraine, aimed at the OSCE monitoring mission. The State Department said that on Tuesday, shots were fired on vehicles that were retreating. The constant harassment of the monitors is seen as an attempt to prevent the international community from seeing what is happening. OSCE monitors are viewed as being among the only "reliable" sources of eye-witness information. A "lasting and durable" ceasefire is needed, Nauert said from the podium.

Another source of tension is Russia's threat that it will target airplanes west of the Euphrates River -- including US coalition planes -- after the U.S. shot down a Syrian armed drone -- the first such incident since the Syrian conflict began over six years ago.