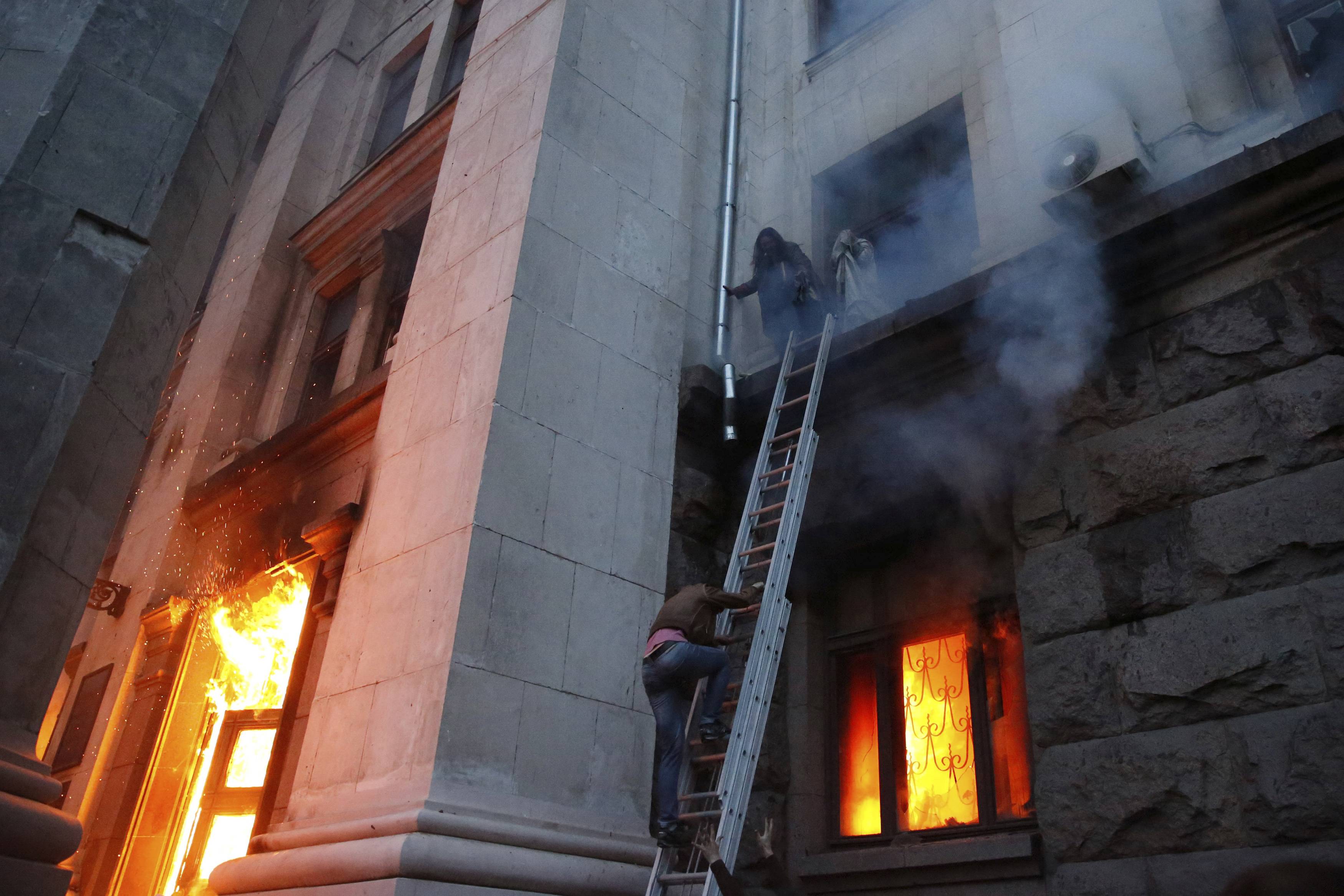 SLOVYANSK, Ukraine -- Ukraine's offensive to recapture an eastern city controlled by pro-Russia forces sharply escalated the crisis in the country's east and set off a clash Friday in the southern port of Odessa that police say killed 31 people.

The Kremlin said the move by Kiev's interim government effectively killed the Geneva pact aimed at cooling the unrest, but pledged to continue efforts to try to calm the tensions.

By nightfall, Ukrainian troops and armored personnel carriers had blocked all major roads into the eastern city of Slovyansk, the center of the pro-Russia insurgency. In the city, most shops were closed and the few that were open were crowded with customers trying to stockpile food and supplies.

Acting President Oleksandr Turchynov claimed that "many" insurgents were killed or wounded Friday, but the offensive also underlined the military's vulnerability. Both sides said two Ukrainian helicopters were shot down by the insurgents, killing two crew members.

The Ukrainian Security Service said one was downed with a surface-to-air missile, adding that the sophisticated weapon undercut Russia's claims the city of 125,000 people was simply under the control of armed locals.

Russia has massed tens of thousands of troops in areas near Ukraine's border. Kiev officials claim Russia is preparing to invade and that it is fomenting the unrest in the east, where insurgents have seized government buildings in about a dozen cities in towns. Moscow denies the allegations, but Foreign Minister Sergey Lavrov has warned Russia would respond to attacks on Russian citizens or interests in the east.

Unlike eastern Ukraine, Odessa had remained largely untroubled since the February toppling of President Viktor Yanukovych, who fled to Russia. But a clash erupted late Friday between pro-Russians and government supporters in the key port on the Black Sea coast, located 330 miles from the turmoil in the east.

Police said the deadly fire broke out in a trade union building Friday, but did not give details on how it started. Earlier police said at least three people had died in a clash between the two sides.

In Moscow, Russian President Vladimir Putin's spokesman said the Ukrainian offensive "effectively destroyed the last hope for the implementation of the Geneva agreement" of two weeks ago that aimed to defuse the crisis. But Dmitry Peskov also said Russia "continues to undertake consistent efforts on de-escalation."

German Chancellor Angela Merkel and President Barack Obama warned Friday that Russia could be hit by new sanctions from Washington and the EU if it continues disruptive actions in Ukraine. Previous sanctions are showing signs of significant effect on the Russian economy.

The fighting broke out around dawn near Slovyansk, a city 100 miles from the Russian border Stella Khorosheva, a spokeswoman for the insurgents, said three fighters and two civilians were killed in the clashes.

One wounded helicopter pilot was seen in a Rossia 24 television video as being in the hands of pro-Russia forces. Several foreign news crews, meanwhile, were detained for several hours Friday by nervous pro-Russia militia before being released. CBS reported that one journalist was beaten.

Slovyansk is strategically key because Ukraine has a huge stockpile of automatic rifles and other light weapons near the city, according to a commentary Friday for Britain's Royal United Services Institute defense think-tank.

"Today, Kiev has upped the ante in the standoff and will test Russian resolve to prevent the Ukrainian government from regaining control of the city and its light weapons stockpile," the think-tank authors wrote.

Turchynov admitted earlier this week that the central government had lost control of the east, and said some government troops and police there were "either helping or cooperating with terrorist organizations." He said Ukrainian forces were working to prevent the unrest from spreading to central areas like Odessa.

Meanwhile, the U.N. Security Council on Friday for the 13th time failed to take action on the growing crisis in Ukraine, with Russian ambassador Vitaly Churkin demanding a "swift halt of all violence" and Western powers scoffing at his country's indignation.

Council members accused Russia of equipping and funding the pro-Russia forces that have seized government buildings in 10 eastern cities. Ukraine on Friday launched its first major offensive against the insurgency.

"Russia ... has released bands of thugs on Ukraine ... and is suddenly discovering this mixture might escape its control," French ambassador Gerard Araud said.

Russia called this latest council meeting, the second in a week. Churkin called on Kiev and its Western "enablers ... to not commit a fatal error" and stop the offensive, which he described as "criminal misadventures." He again called Ukraine's interim government illegitimate.

"The only agreement by members of the U.N. Security Council, was that the accord reached last month in Geneva - which called for a reduction of violence - was not working," Falk said.

Ukraine, a nation of 46 million, is deeply divided between those in the west who favor closer ties with Europe and many Russian-speakers in the east who look toward Moscow. Ukraine has accused Russia of backing the insurgents who have seized government buildings in at least 10 eastern cities and fears that Moscow is seeking a pretext to invade or annex more territory like it did with Ukraine's Black Sea peninsula of Crimea in March.

The peace deal in Geneva last month aimed to get those who had seized government buildings in Ukraine to leave and calm down the tensions that have prompted the United States and the European Union to slap Russia with rounds of sanctions.

Russia's foreign ministry accused Ukraine's fledging government of using "terrorists" from ultranationalist organizations for Friday's military operation. It also claimed that Kiev deployed tanks and helicopters that were "conducting missile strikes on protesters," something that neither side in Ukraine reported.

An Associated Press crew also saw no evidence of missile strikes in Slovyansk.

Russia also cited insurgents in Ukraine as saying that some of the government attackers spoke English - an insinuation that the Ukrainian military was getting some help from the West.

Television crews from CBS News and Sky News were detained Friday on the outskirts of Slovyansk.

CBS New correspondent Clarissa Ward told "CBS This Morning" that she and her crew were stopped by pro-Russia insurgents at a checkpoint just outside Slovyansk, then taken to a nearby town where they were blindfolded tightly with masking tape. They were released several hours later, unharmed except for one man who was beaten.

Ward said the militants separated the men from the women and, while keeping them blindfolded, interrogated them about their nationalities and asked whether they had families. A veteran war correspondent, Ward said that when questions like that are asked, "you start to feel a pit in your stomach."

Kiev's interim government came to power after Yanukovych fled, drummed out by months of anti-government protests. Ukraine plans to hold a new presidential election on May 25.