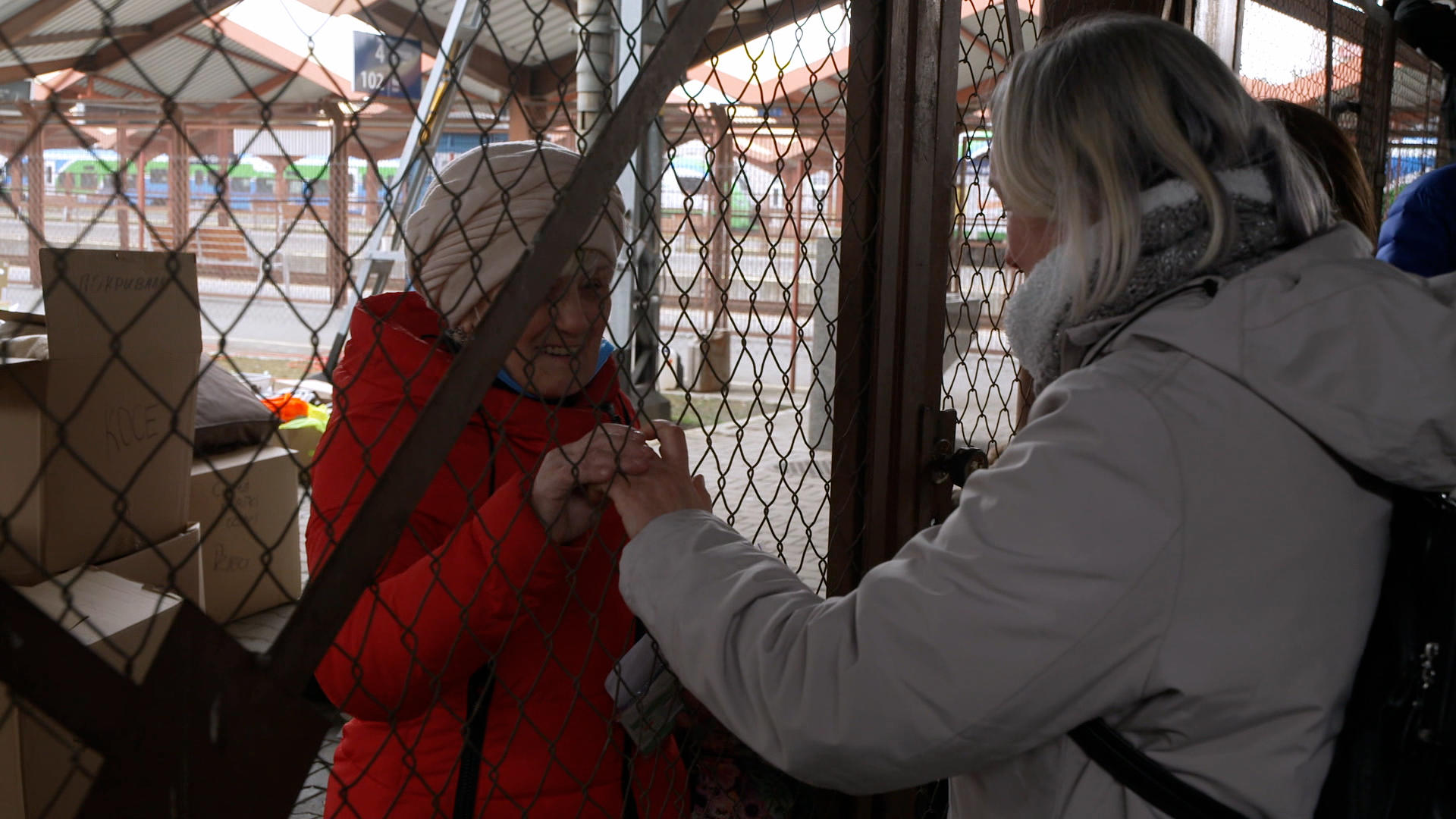 Editor's note: In the studio introduction to this report, we featured a harrowing image of the war in Ukraine from The New York Times photographer Lynsey Addario. Since our broadcast aired, The Times has updated its reporting on the image to clarify, "[the story] misstated the relationship between a man injured by a missile outside Kyiv and a family. The man was a friend of the family, not the father of the two children and the husband of the woman killed in the attack."

Millions of civilians are fleeing the Russian invasion of Ukraine. Today, a family was killed by Russian shelling. The deaths were reported by a New York Times photographer who tweeted an image that flashed around the world. A warning, the picture is graphic.

Photographer Lynsey Addario tweeted, "at least three members of a family of four were killed…" It was the mother and son and daughter. At the time Addario was there, Ukrainian soldiers were trying to save the father.

Also, tonight, a Pentagon official tells 60 Minutes that Russia's assault on the capital city, Kyiv, is stalled because of fierce resistance and because the Russians are running short of food and fuel. They expected Kyiv to capitulate in 3-5 days. This is day 11. Also, the U.S. Is working on an exchange whereby Poland would donate Russian-built fighter jets to Ukraine—the kind the Ukrainians know how to fly-- and the U.S. would replace Poland's jets with American planes.

Today, the United Nations said one and a half million refugees have escaped. Many are on evacuation trains arriving in Poland. The first stop is a rail station with 150 years of history. The tracks at Przemysl bore inconceivable loss in the 20th century. Now, in the 21st, misery has arrived again, unscheduled, on platform four.

At the end of 21 hours—after 450 miles of war— something that looked like hope shined atop an old engine pulling families across the new border of the free world.

This is the main Polish station where five to ten trains a day escape the war. On each, 2,000 women and children are compressed into standing-room only. Before the doors can open, they reach for water lifted to the windows. This train fled the Russian army closing in on the southern port city of Odessa. After a day and a night fearing that the train would be attacked, they descended into safety on platform number four.

Overcome with gratitude, Alessa told us, "This is our first time in Poland. We could see people waving and greeting us from their homes, it's wonderful."

That was the greeting of Przemysl, Poland—a town with a thousand years of history. It's had many masters, including Russia. But today, Przemysl is eight miles from Ukraine's border--the first stop on the flight to freedom.

Wojciech Bakun: They are in safe place, that's the main thing.

Wojciech Bakun is the mayor.

Scott Pelley: Do you know how many refugees have come to your town at this point?

Wojciech Bakun: I think it's about 70-80 thousand, maybe, maybe more.

Scott Pelley: How many citizens do you have in this city?

But "double" is not a burden—not yet. Those who left behind homes, husbands, careers and schools are welcomed with soup, coffee--coats against the gloomy 30 degrees—and free phone cards to connect with the trouble at home.

On arrival, they're free to travel anywhere they want. Some reach for family or friends already living outside Ukraine. But, inside the Przemysl station, opened in 1860, those with no destination fill every hall and room. They rest on all they have left in the world – a light load, but for the burden of memory.

"There were so many people," Mersanna told us. "So many children, crying all the time. My family spent four nights in a bomb shelter. Everyone is so scared."

Scott Pelley: What should the people of the world know about what's happening in Ukraine?

"The Russians are saying they're bombing only military bases. It's all a lie. They're bombing civilians they're killing children."

Irina told us, "We came from Kyiv they're bombing civilians there. My son is in the military. He has kids and they can't leave."

That's the reason nearly all the refugees are women and children. Ukraine is not allowing men between the ages of 18 and 60 to leave the country.

Scott Pelley: What did you see in Kyiv?

And so she passed our question to her 15-year-old granddaughter, Nastia.

"We heard lots of explosions, rockets, and shelling," Nastia said.

Scott Pelley: How did you get away?

"We took the first train available, it was full. There was no place to move. They announced four times to lie on the floor and cover yourself. Then the train stopped and the lights went out. They warned us about gunfire," Nastia said.

Scott Pelley: Ukraine has fought the Russians fiercely and I wonder what you think of those who've been left behind, who are still fighting?

"Our people are very brave. We will win, glory to Ukraine," Irina said.

But glory is likely to be measured not in victory—but in how long defeat can be delayed. This weekend, Russian troops attacked in the north, south and east and captured the largest nuclear power plant in Europe. But what began as a blitz, has mired into a siege. A miles-long column of Russian forces stalled for days outside the capital, Kyiv. That city of 3 million has gone underground. There are no reliable counts of casualties. In Russia, Vladimir Putin led his people into a new dark age. Isolated like a pathogen, Russia was quarantined from transportation, business and media. Friday, Putin made reporting on Ukraine a crime with a penalty of 15 years. Russia's last independent media closed.

Thursday, at the United Nations, an ovation overwhelmed the reading of the writing on the wall.

The United States and NATO allies rushed antitank and anti aircraft missiles to Ukraine while, at the same time, the alliance said it would not fight on the ground or in the air.

That is not to say there aren't at least a few fresh troops on the way. At the Polish border we found Ukrainians, living outside the country, who were headed home to join the fight.

One man told us, "We are going back because our country is in danger."

Scott Pelley: What do you intend to do there?

We will defend our land, and our families.

Scott Pelley: Can you defeat the Russians?

Yaroslav told us, "We simply want to live in peace. We don't want anyone to tell us how to live." Also returning was a man named Serhei, who is not the type to part with more words than he has to.

Scott Pelley: Why are you headed back to Ukraine?

Scott Pelley: why do you feel that you have to go back to Ukraine?

Scott Pelley: I wish you all the luck in the world.

Slava Ukraini, "glory to Ukraine," is a special insult to Russia. The Soviets once banned the phrase and, so made it  immortal.

It's the parting shot in the "never give in" selfies of the Ukrainian president. Tough men of few words are being inspired by a leader who was once Ukraine's top comedian. But, this past week, Volodymyr Zelensky turned out to be more Churchill than Chaplin.

Olga Bilous: I am really so, so proud that we have this kind of president that he didn't leave us, he's staying with his people, he's fighting there.

When we met Olga Bilous, she'd been waiting two days for her parents to bring her 14-year-old daughter to Poland.

Olga Bilous: It's so encouraging, and it gives you, you know, inner strength, and I'm so happy.

Scott Pelley: You're proud to be Ukrainian.

Olga Bilous: I am proud, I am proud to be Ukrainian, of course.

Ukraine is about the size of Texas, with some of the richest soil on Earth and 44 million people, but it has never known peace for long. These families are descendants of misery.

In 1933, more than 3 million Ukrainians died in a famine engineered by Stalin. Then, 5 million were murdered by Nazis. The Polish compassion we saw on the platforms may grow from shared experience. No one really notices anymore, but outside the station we saw a modest memorial to a monstrous crime. It recalls when many thousands of Poles were packed into freight cars at the station, on the order of Stalin, and shipped to Siberia.

Maybe empathy is why so many Poles took time off to volunteer. Eliasz and Daniel Dyrov are brothers.

Scott Pelley: In my experience, refugees from war are almost never welcome in neighboring countries. And I wonder why Poland is doing this.

Eliasz Dyrov: We are first to help, and we-- welcome our Ukrainian brothers. And when I am praying to God, I am grateful to God, and I say, "Thank you God for giving me the opportunity to help these people."

Daniel Dyrov: This disaster become to be not only a disaster in Ukraine, it becomes to be a disaster of European cities because all these Ukraine refugees, they need shelter, they need medical care, and many different things. So thanks God, Polish nation support now the Ukrainian nation.

Krzys Butra is a firefighter taking sick leave. He helps load supplies onto the trains heading back to Ukraine.

Scott Pelley: So the trains go back with food and supplies? Medical supplies?

"Everything," including the Ukrainian men headed to the train platform, who, like the ones we met at the border, are going home to fight.

Late last week, the European Union granted refugees blanket permission to settle in any of the 27 EU nations for up to three years. Those crowding Przemysl are already moving on to shelters in cities farther down the line. Major Wojciech Bakun told us Poland is making room for another historic catastrophe.

Scott Pelley: What happens to the people who have nowhere to go?

Wojciech Bakun: Oh, we prepare lot of places. I think in Poland we have about 2 million places where every person can stay for long time, not for a few days, for long time, for months or if he or she needs, for years.

Two million is half the refugees the United Nations predicts. Four million would make this Europe's worst humanitarian disaster since World War II. In an exodus without timetables, how long Ukrainians will have to endure isn't known. Theirs's is a future they cannot see. Only one thing is certain. On platform four, another train is coming.

Britain under pressure to crack down on corrupt Russian money