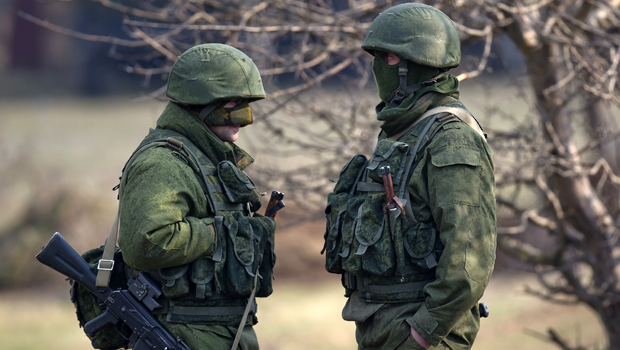 Russian forces on the border with Ukraine were "ready to invade," Ukraine's acting president said Thursday, but he also believed that Moscow's "aggression" could be stopped.

Acting President Oleksandr Turchynov made the statement to a Ukrainian television channel, the Reuters news agency reports, citing a statement posted to the presidential website.

"We are doing all we can to avoid war, whether in Crimea or in any other region of Ukraine," Turchynov said, adding that the country's forces were at full combat readiness.

Russian forces have secured control over Ukraine's Crimean Peninsula, and Russia's parliament has given President Vladimir Putin permission to use the military to protect Russian speakers in Ukraine.

"All of civilized humanity supports our country," said Turchynov. "All the leading countries of the world are on the side of Ukraine, and I am sure that this united effort in the international arena, bringing together all democratic countries, can still allow us to halt this aggression."

On Wednesday, Andriy Parubiy, secretary of Ukraine's National Security and Defense Council, told reporters in Kiev that Russia has deployed more than 80,000 troops, up to 270 tanks and 140 combat planes close to the border, creating the "threat of a full-scale invasion from various directions."

Parubiy said Russian troops are based in the immediate vicinity of the Ukrainian border, some of them as close as a two- or three-hour drive from Kiev, the Ukrainian capital.

He also said Moscow has accepted a request that Ukraine made Tuesday to conduct a surveillance flight over Russian territory.

Antonov said that while Russia was not obliged to allow such a flight, it decided to issue permission for one so that Ukraine can see for itself that "Russian armed forces aren't conducting any military activities near the border of Ukraine that could threaten its security."

Crimea plans to hold a referendum on Sunday that will ask residents if they want the territory to become part of Russia. Ukraine's government and Western nations have denounced the referendum as illegitimate and warned Russia against trying to annex Crimea.

Parubiy said Russia could try to seize government buildings in eastern regions of Ukraine and demand a referendum there. He said such plans have been thwarted, thanks to efforts of Ukrainian law enforcement agencies.

Parubiy added that Ukrainian authorities have denied 3,700 Russian citizens permission to enter Ukraine because they were suspected of being involved in extremism and sabotage.

Parubiy said 399 people already have registered as refugees from Crimea.

Also Wednesday, Ukrainian Prime Minister Arseniy Yatsenyuk met with President Obama in Washington. Yatsenyuk has asked the West to defend Ukraine against Russia, calling it a country that is "armed to the teeth and that has nuclear weapons."

NATO headquarters spokesman Lt. Col. Jay Janzen said one Boeing E-3 Sentry aircraft based in England would observe Russian air and sea movements from Polish air space, while the other based in Germany would fly over Romania. Both Poland and Romania are NATO members and border Ukraine, and Romania's Black Sea coast is only about 140 miles from the Crimean Peninsula.

Also on Wednesday, a Pentagon spokesman, Army Col. Steve Warren, said the U.S. is sending 12 F-16 fighter jets to Poland to augment the air force detachment there. He said there is no scheduled departure date for the fighter jets and they will be there "until further notice."

Last week, the Pentagon sent six F-15 fighter jets to Lithuania to bolster air patrols over the Baltics, adding to the four such planes that previously had been there for the mission.

In Belarus, an ally of Russia, President Alexander Lukashenko said Wednesday that Russia should respond to the U.S. and NATO actions by basing 12 to 15 more fighter jets in his country. Belarus, where Lukashenko has led the nation for nearly 20 years, already hosts four Russian fighter jets, and the two allies have held joint war games.

As Washington considers imposing new sanctions on Russia, U.S. Secretary of State John Kerry will hold talks with his Russian counterpart, Foreign Minister Sergey Lavrov, in London on Friday in a bid to defuse the crisis over Ukraine.

In Warsaw, Polish Prime Minister Donald Tusk said after talks with German Chancellor Angela Merkel on Wednesday that both leaders "hope to see signs of de-escalation (in Ukraine), but we must also be prepared for a worse scenario."

"We are prepared for a long-term action because this crisis will take longer than could be expected," Tusk said, adding that the European Union foreign ministers will discuss sanctions against Russia on Monday.

Tusk said the EU plans to sign an association agreement with Ukraine next week.

Merkel - who has discussed the Ukraine crisis with Putin on the phone five times since Jan. 29, and who has called the Crimea referendum "illegal" - said sanctions will be needed, if talks fail.

"In general, we need patience," she said. "We have the strength to react. We are in the 21st century. We don't solve conflicts with military. However we also don't evade conflicts."

Zelenskyy pushes for fighter jets on visit to U.K.