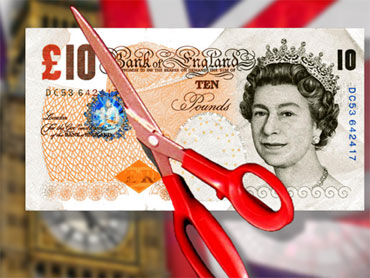 Osborne said Tuesday his program "pays for the past and plans for the future."

Government borrowing is to be reduced from 10 percent of GDP to 1 percent within 5 years, by means of spending cuts, including a freeze on financial support to the Queen.

Osborne announced Tuesday that he would impose a levy on banks to raise £2 billion ($3 billion) a year, and cut most government departments' budgets by 25 percent.

The government is also hitting consumers with a rise in the broad-based tax on sales and services from 17.5 percent to 20 percent next year.

Unusually, Osborne announced no increase in taxes on alcohol, tobacco and fuel, and he repealed a high tax on cider.

Osborne said Queen Elizabeth II had accepted a freeze on financial support from government under his plans, and the government will impose a two-year wage freeze on most civil servants.