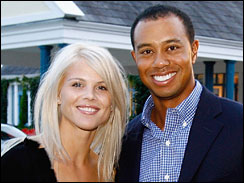 The Sun's "exclusive" front page story did not name any of its sources for the information, but reporter Alex Peake in Orlando said the quotes had come from "a friend" of Nordegren.

After a parade of women came forward claiming sexual flings with Woods following a car crash just outside his home, the golfer told his 29-year-old wife he'd "do anything" to save their marriage, according to The Sun, Britain's most widely circulated tabloid.

The report says Nordegren was ready to walk out on the billionaire as the infidelity claims surfaced, but agreed to stick by him for their two children's sake, "but on her terms."

One of those terms, if the report is to be believed, is that he quit, or at least take a long break from the international golf tour.