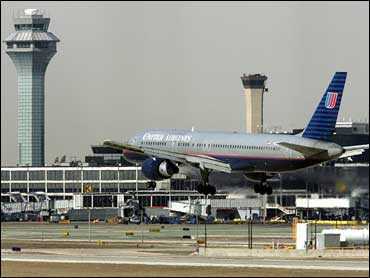 The workers, some of them pilots, said the object did not have lights and hovered over an airport terminal before shooting up through the clouds, according to a report in Monday's Chicago Tribune.

The Federal Aviation Administration acknowledged that a United supervisor had called the control tower at O'Hare, asking if anyone had spotted a spinning disc-shaped object. But the controllers did not see anything, and a preliminary check of radar found nothing out of the ordinary, FAA spokeswoman Elizabeth Isham Cory said.

"Our theory on this is that it was a weather phenomenon," Cory said. "That night was a perfect atmospheric condition in terms of low (cloud) ceiling and a lot of airport lights. When the lights shine up into the clouds, sometimes you can see funny things."

The FAA is not investigating, Cory said.

United spokeswoman Megan McCarthy said company officials do not recall discussing any such incident from Nov. 7.

At least one O'Hare controller, union official Craig Burzych, was amused by it all.

"To fly 7 million light years to O'Hare and then have to turn around and go home because your gate was occupied is simply unacceptable," he said.

Some witnesses interviewed by the Tribune were upset that federal officials declined to further investigate the matter.

"I tend to be scientific by nature, and I don't understand why aliens would hover over a busy airport," said a United mechanic who said he saw the object while taxiing a Boeing 777 to a maintenance hangar. "But I know that what I saw and what a lot of other people saw stood out very clearly, and it definitely was not an [Earth] aircraft."

The witnesses, who all spoke to the Tribune under condition of anonymity, said they had a difficult time finding the object as it flew through dense clouds. Witnesses also said the object created an open hole of clear air in the cloud layer that disappeared a few minutes after it passed through the clouds.

The FAA initially denied there were any reports of a UFO sighting, but later backtracked after a Freedom of Information Act filed by the newspaper revealed the call by the United supervisor to the FAA.