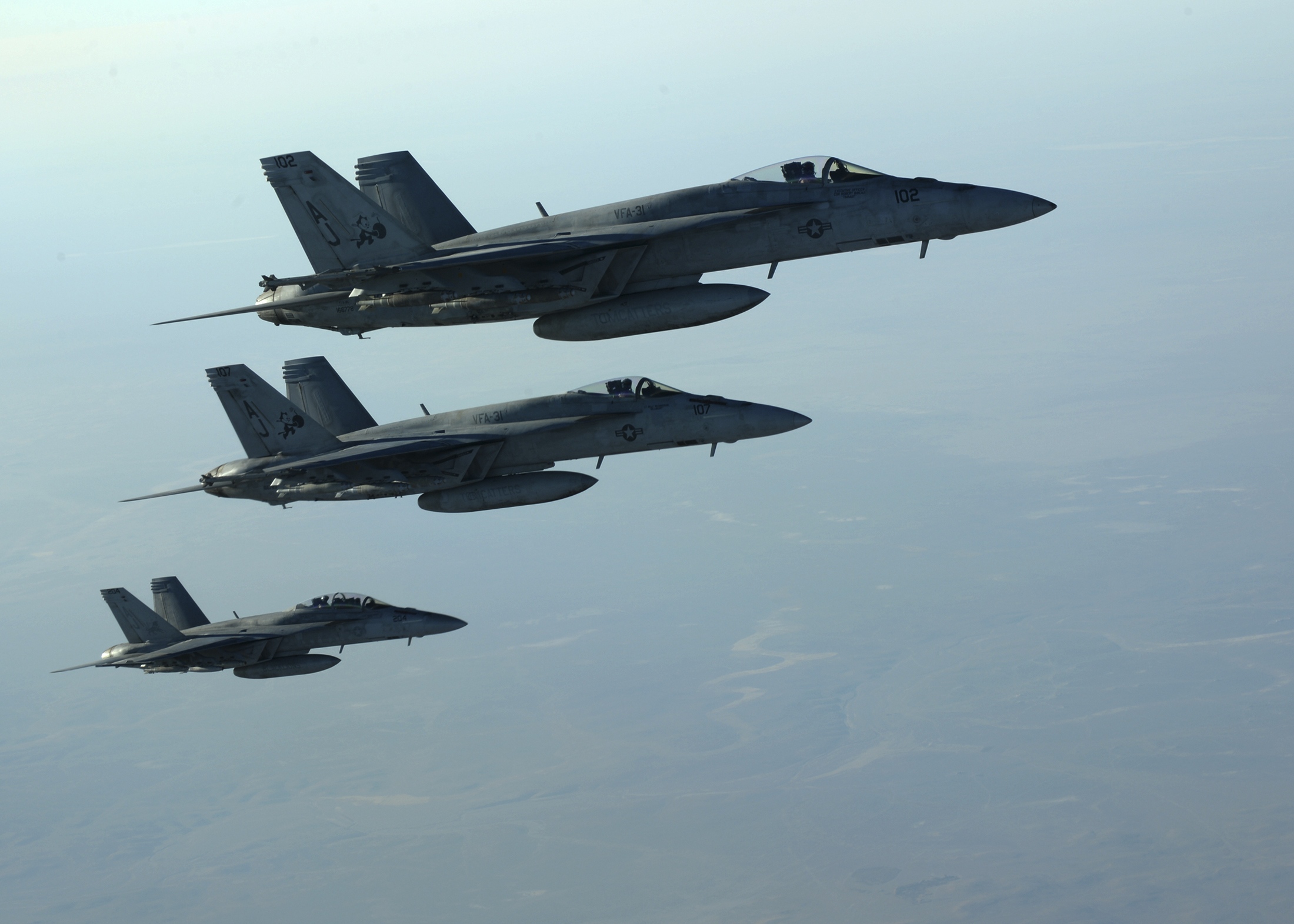 CBS News national security correspondent David Martin reports that the strikes were against a dozen ISIS targets with five of the strikes being carried out by the U.S. and seven by Arab allies.

Martin reports that they are economic targets -- including oil refineries -- intended to take away the source of ISIS funds. Most of the targets are located in the desert where there is little chance of collateral damage -- which is why the Arabs, who have less sophisticated night vision sensors on their aircraft, are flying such a large proportion.

As with Monday night's strikes, it is possible they will spot targets of opportunity along the way and strike those as well.

U.S. Central Command (CENTCOM) said in a statement the results of the strikes on the refineries were still being assessed but the initial indications are that "the strikes were successful."

"These small-scale refineries provided fuel to run ISIL operations, money to finance their continued attacks throughout Iraq and Syria, and an economic asset to support their future operations," the statement said, adding that the militants generate an estimated $2 million per day from the refineries.

Earlier Wednesday, U.S. warplanes bombed ISIS militant positions on both sides of the Syrian-Iraqi border as hard-line Syrian rebels who have been battling the extremist group sought cover, fearing a wider aerial campaign against all fighters seen as a potential threat to the United States.

The airstrikes come a day after the U.S. and five Arab allies opened their military operation against ISIS group in Syria with more than 200 strikes on some two dozen targets. That campaign, which President Barack Obama has warned could last years, expands upon the aerial assault the U.S. has already been waging for more than a month against the extremists in Iraq.

"There's definitely a second day and there'll be a third and a fourth" in Syria, U.S. Secretary of State John Kerry told CNN in an interview on Wednesday. "This will go on for some time in several forms."

Along with its Arab partners, the Obama administration aims to destroy ISIS, the extremist faction that has through brute force carved out a proto-state in the heart of the Middle East, effectively erasing the border between Iraq and Syria. The United Nations has accused the extremist faction of committing war crimes.

In a separate statement, Kirby said the strikes in eastern Syria hit a staging area used by the militants to move equipment across the border into Iraq.

He did not specify exactly where the air raids took place, but the Iraqi town of Qaim is across the border from the Syrian town of Boukamal, where Syrian activists reported at least 13 airstrikes on suspected ISIS positions on Wednesday.

The Britain-based Syrian Observatory for Human Rights said it was not immediately clear who carried out the airstrikes in and around Boukamal, but it cited locals as saying the intensity of the air raids was similar to that of strikes on the town early Tuesday by the U.S.-led military coalition.

CBS News' David Martin reported Wednesday that the U.S. had carried out at least one strike overnight on a staging area near the Iraqi border, in the vicinity of Boukamal.

Reporting Wednesday from inside Turkey, just across the border from Kobani, CBS News' Holly Williams said residents speaking to her by telephone said ISIS was shelling the outskirts of the town. More than 130,000 Syrian refugees have already streamed over the border into Turkey in recent days, trading the threat from ISIS for the hard conditions of makeshift camps inside mosques and schools.

Williams reported that the United Nations fears as many as 400,000 refugees could try and pour into Turkey if Kobani falls to the militants.

In the opening salvo of the campaign, the U.S. on its own also hit al Qaeda's Syria branch, known as the Nusra Front. American officials said the strikes targeted the so-called Khorasan Group, which the U.S. says consists of hardened jihadis who pose a direct and imminent threat to the United States.

On Wednesday, the Nusra Front said it was evacuating its compounds near civilian areas in Idlib province in northwestern Syria. The announcement, made on a Facebook page associated with the group's Idlib operations, follows a U.S. airstrike on a Nusra Front base in the village of Kfar Derian that killed around a dozen fighters and 10 civilians, according to two activists.

Another Syrian rebel group, Ahrar al-Sham, was also clearing out of its bases, weapons workshops and offices, according to the Observatory. It said the group issued a statement calling for fighters to limit the use of wireless communication devices to emergencies, to move heavy weapons and conceal them, and to warn civilians to stay away from the group's camps.

An activist in Idlib who goes by the name of Mohammed confirmed that Ahrar al-Sham was evacuating its bases throughout the northern area. He said he was not aware of any strikes against the group, but said the fighters thought they would be targeted by the coalition because of their ultraconservative Islamic beliefs.

Ahrar al-Sham has been among the steadiest and most effective forces fighting to oust President Bashar Assad in Syria's civil war. It has also been on the front lines of a nine-month battle in northern Syria against ISIS. But the U.S. has long looked askance at Ahrar al-Sham, considering the group too radical and too cozy with the Nusra Front.

The U.S.-led campaign in Syria has drawn a mixed response from the country's multitude of rebel brigades, many of whom cooperate with the Nusra Front and have been locked in a deadly fight with ISIS militants since January. But the rebels' ultimate goal is to topple Assad, while the U.S. is focused on defeating ISIS.

On Wednesday, the main Western-backed Syrian opposition group criticized the American-led airstrikes for being limited to ISIS and other extremists while leaving Assad's government untouched.

"We regret that the international community has come up with partial solutions to the Syrian conflict in which hundreds of thousands were killed or detained by the Assad regime," said Nasr al-Hariri, secretary general of the Syrian National Coalition.

In a statement, al-Hariri also said that any effort other than helping Syrians overthrow Assad will only fuel extremism.