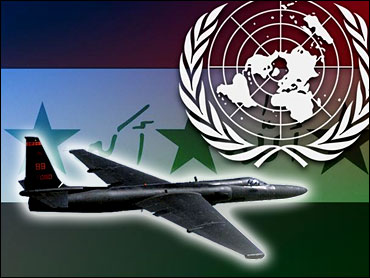 Iraq reported the first flight by an American U-2 surveillance plane Monday in support of the U.N. inspection mission.

On the ground, there were continuing signs of division over the U.S. push toward a possible war against Iraq.

A European Union summit ran into trouble as France insisted that it would try to block any imminent attack on Baghdad.

President Jacques Chirac said France would oppose any effort to draft a new U.N. resolution authorizing war at this time.

"There is no need for a second resolution today, which France would have no choice but to oppose," said Chirac. France has a veto on the U.N. Security Council.

British Prime Minister Tony Blair said time was running out and the EU must set limits on how much longer it will allow Iraq to remain defiant.

"I think most people understand … if that (disarming) cannot be done peacefully, it must be done by force," Blair said. "That's why we require a timetable."

Diplomats said little progress was made toward resolving disagreement over Iraq and the meeting might worsen the situation by underscoring differences.

The impasse indicated that the compromise that this weekend ended a stalemate over NATO aid to Turkey had not solved the larger problem of Europe's division over the possible war.

After holding out for a month, Germany and Belgium dropped their objections late Sunday, but the only way NATO got the deal was by going to its Defense Planning Committee, which Paris withdrew from in 1966. Paris participates only in political consultations.

The continuing discord over a possible war will make the push for a resolution authorizing force a tough fight. It's one Britain and the United States plan to start waging this week.

Both Washington and London have said earlier resolutions already give them the authorization to go ahead with a military strike, but British Foreign Secretary Jack Straw said in Brussels Monday: "In terms of political desirability, we have always said we would prefer a second resolution."

Officials in both capitals spent the weekend reworking what was supposed to be a very tough resolution. Diplomats said the final text will place Iraq in material breach of its obligations and reiterate that Saddam now faces serious consequences. But it will likely fall short of an explicit call to arms.

Other options include issuing Saddam an ultimatum to relinquish power or meet a set of conditions within a tight deadline, council diplomats said.

The resolution could be unveiled during Tuesday's open Security Council debate on Iraq.

The diplomats, who spoke on condition of anonymity, said they expected Security Council negotiations on the draft to be wrapped up by the time chief weapons inspector Hans Blix delivers his next report March 1.

So far, Britain and Spain are the only two council members that have voiced support for the U.S. administration's stance on Iraq. Key swing votes, including Mexico, Chile, Angola and Pakistan, are likely to abstain in a vote unless the five powers — the United States, Britain, Russia, France and China — can agree to a compromise on timing for any use of force in Iraq.

Compromise is also proving elusive for Arab states. U.S. ally Kuwait, a likely staging ground in any war against arch foe Iraq, accused Lebanon of bias Monday over its chairing of an Arab League meeting that urged Mideast states not to aid an American attack on Baghdad.

Kuwaiti officials complained that their views were ignored in a resolution proposed by Lebanon's close ally, Syria, and endorsed by the Arab League's member states, except for Kuwait.

The resolution endorsed Sunday urged Arab states to "refrain from offering any assistance or facilities to any military operation that might threaten the security, safety and territorial integrity of Iraq."

The ministers, however, failed to agree on an Egyptian call to hold an Arab leadership summit on the Iraqi crisis amid a dispute over whether Washington or Baghdad should be doing more to avert war.

Central to the debate over timing are competing perceptions over how well Baghdad is cooperating with the inspectors.

Monday's statement did not indicate what areas were covered by the flight. Efforts to contact a U.N. spokesman in Baghdad for confirmation were unsuccessful.

Meanwhile, Turkey's prime minister on Monday ruled out a parliamentary vote to allow in tens of thousands of U.S. combat troops before Turkish and U.S. officials agree on the conditions of the deployment. One of the main sticking points is the economic aid package that would compensate Turkey for any losses incurred in an Iraq war, diplomats said.