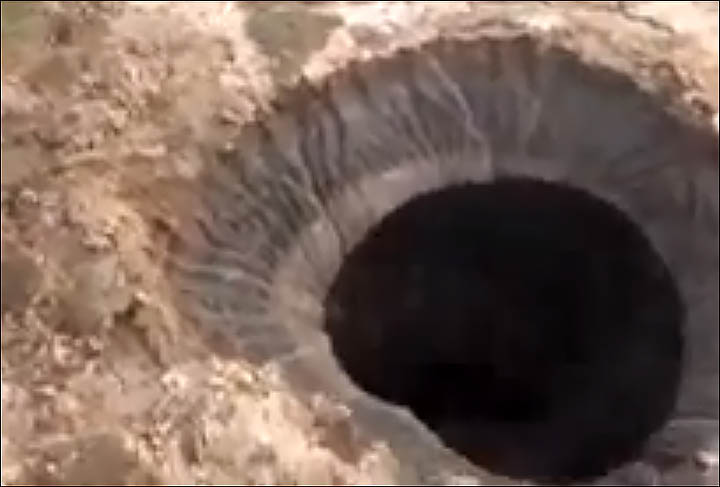 Earlier this month, a pilot and his passengers reportedly found a gaping hole in the Earth while flying over a remote part of northern Siberia. Now almost two weeks later, two more holes have mysteriously appeared: one near where the original hole was found and another located east of the region.

The initial report sparked some wild theories, including a possible alien invasion. This time around, scientists may get a clearer picture as to what's causing the craters, according to The Siberian Times.

The first two holes were found in Yamal Peninsula -- which translates to "end of the world" in a local language. They reportedly formed in recent years and have lakes of ice at the base, according to the Siberian Times. This lends credence to reports of earlier crater sightings that were previously dismissed as hoaxes. Mikhail Lapsui, a local official, told the newspaper that one of the holes in the latest report was first spotted by area residents last September.

The hole reported earlier this month was estimated to be about 230 feet deep and about 100 feet wide, somewhat smaller than first reported. The apparent size of second hole is about half that -- fifty feet wide. Conflicting stories of how it formed, including accounts of an underground explosion or a falling asteroid, have left scientists stumped.

The third hole was accidentally found by herders who almost stumbled into it, in the Taymyr Peninsula, to the east of Yamal, according to reports. The Siberian Times said it measured about 330 feet deep and 15 feet wide.

Scientists and government experts have not come to an agreement as to what is causing the holes. Following multiple expeditions to examine the first hole, one popular explanation is that due to rising temperatures and climate change, the permafrost melted, causing an eruption of methane gas. Summers over the past two years were relatively warm for the region, a researcher at the State Scientific Center of Arctic Research told the Siberian paper.

Another theory was that it could have been a man-made disaster. Gas fields, located by the first hole, are a possible culprit, but scientists say that is highly unlikely.

The researcher told the paper if the crater had been caused by a gas explosion, it would have been closer to the fields.

Right now, the only detail that scientists can agree on is that these holes were formed by internal -- rather than external -- forces.