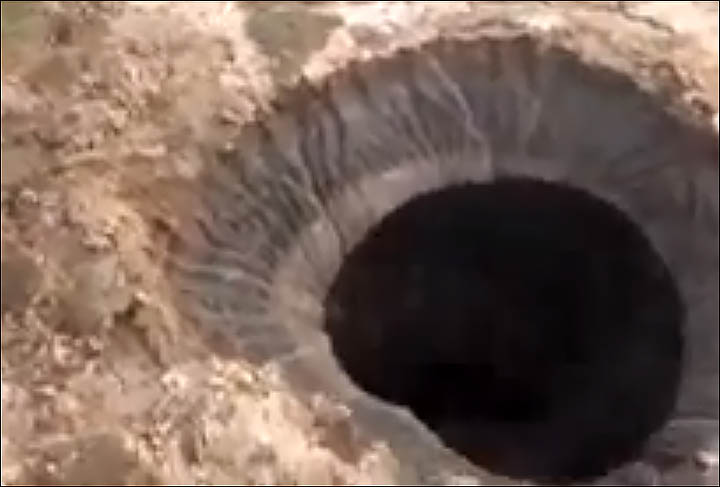 A helicopter pilot and his oil industry passengers reportedly spotted and videotaped this gaping hole in the Earth in a remote part of far northern Siberia. The crater is estimated to be about 80 meters, or 262 feet, wide. No one is sure just how deep it goes.

The crater is in an area called Yamal, which translates as "end of the world."

According to The Siberian Times, the hole may actually have formed about two years ago, but previous reports and photos were thought to be fake. Now Russian scientists are trekking to the area to check it out and try to determine the cause.

Since the video was posted to YouTube last week, it's spawned endless speculation online about what may have caused the giant hole:

A meteor, similar to one that flattened hundreds of miles of forest in Siberia in 1908?

The Siberian Times reports the first two possibilities were discounted by a spokesperson from the Russian Emergencies Ministry, though the spokesperson gave no explanation.

The last two seem more likely. Yamal is home to a large reservoir of natural gas. According to the Siberian paper, "Anna Kurchatova from Sub-Arctic Scientific Research Centre thinks the crater was formed by a water, salt and gas mixture igniting an underground explosion, the result of global warming. She postulates that gas accumulated in ice mixed with sand beneath the surface, and that this was mixed with salt - some 10,000 years ago this area was a sea. Global warming, causing an 'alarming' melt in the permafrost, released gas causing an effect like the popping of a Champagne bottle cork, she suggests."

Last year a massive sinkhole in Louisiana was thought to have been caused by the collapse of the ground over a bubble of dissipating natural gas.

The evolution of Microsoft Windows

Portland man lives in a Boeing 727