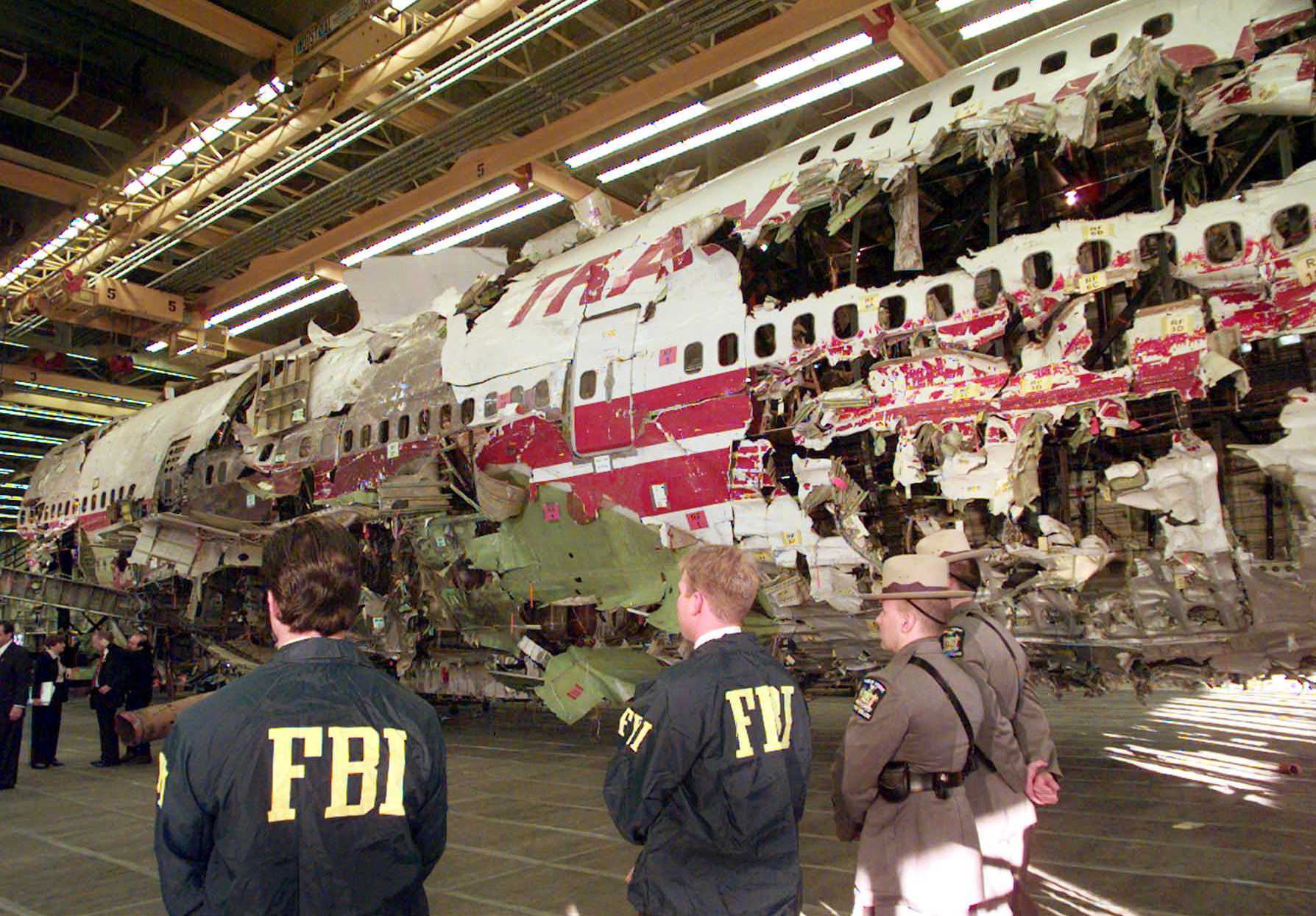 WASHINGTON Current and former federal officials who played key roles in the investigation of one of the nation's worst aviation disasters said Tuesday they stand by their conclusion that the explosion of TWA flight 800 was caused by overheated fuel tank vapors, and not a bomb or missile.

The officials spoke to reporters at a briefing on the National Transportation Safety Board's four-year investigation following the explosion and crash of the Boeing 747 off Long Island, N.Y., on July 17, 1996, killing all 230 people on board. The board took the usual step of organizing the briefing on an investigation that has been closed for years. That's in response to a new documentary film set to air this month on the 17th anniversary of the tragedy. The film says new evidence points to the often-discounted theory that a missile strike may have downed the jumbo jet.

The officials who spoke at the briefing dismissed allegations of a cover-up, saying that the evidence points strongly to the board's conclusion that overheated gases in the plane's near-empty fuel tank caused the tank to explode. The gases were most likely ignited by a spark from damaged wiring in a fuel measuring system.

Joseph Kolly, the current director of the board's Office of Research and Engineering, was the chief fire and explosives investigator on the flight 800 investigation. He said he is "absolutely" certain the fuel tank was the cause.

"We went to the `nth' degree, and then some," he said, laying out the different facets of the investigation. In their search for clues, investigators tested shoulder-fired missiles to see if they would show up on radar and used another 747 to replicate the overheating of fuel tank vapors, among other tests.

"I am upset about bringing this back up, for the sake of the people who lost folks in the accident," Kolly said. "It's not good."

Two family members of those killed attended the briefing.

"I think they did a complete and thorough investigation in the beginning," said Matthew Ziemkiewicz of Rutherford, N.J., whose sister, Jill, was a flight attendant on the plane. "These are old conspiracy theories that have been around since the beginning."

"But there are still family members who believe it was brought down by a bomb," he said. "I respect that."

CBS News' Pat Milton spent 11 months at the scene of the investigation covering the story for the Associated Press, and wrote an authoritative account of it in a book called "In The Blink Of An Eye." She told CBSNews.com many of the theories raised by the film have long been discounted, but part of the reason competing theories to the official finding keep springing up is that "they never found the tell-tale piece" of evidence.

"There were people at the end that wished they could've pinpointed exactly what happened," Milton said.

Other former NTSB officials involved in the investigation who were not at the briefing have also defended its handling, describing the investigation as one of the most extensive and exhaustive in the board's history. The board issued a 400-page report on the accident, accompanied by more than 17,000 pages of supporting material.

Kelly Nantel, a spokeswoman for the board, said the board is considering the petition and has asked parties to the original investigation for their comments.

One of the former investigators who signed the petition, Hank Hughes, was in charge of reconstructing the interior of the aircraft cabin for NTSB from debris recovered from the ocean. Hughes said the board "completely discounted" the accounts of more than 200 witnesses who say they saw a streak of light heading toward the plane before it broke apart.

Standing in the rain outside the NTSB briefing, Hughes also said the plane's reconstructed fuselage — which reporters were allowed to view after the briefing — has holes consistent with what would be expected from missile shrapnel. Reporters weren't able to see the holes, he said, because they were on the opposite side of the reconstructed plane, facing away from the board's briefing area.

Hughes offered no explanation why his former colleagues would deliberately ignore important evidence.

But officials at the briefing and other former NTSB investigators said an examination of witness statements showed that what people thought might be a missile was actually the trajectory of the plane after the fiery explosion, the force of which broke off some pieces of the aircraft while much of the remainder of the plane was propelled up and forward, before plunging into the ocean.

Witnesses "legitimately saw flames coming down and everything else, and explosions, but it occurred after the initial center fuel tank explosion," Tom Haueter, who recently retired as head of NTSB's aviation office and was a senior investigator during the flight 800 investigation, said in an interview.

CBS News senior correspondent John Miller, the first reporter on the scene, has covered the disaster extensively. He said of the documentary, "I think they've raised old concerns, but they packaged it in a way that's very compelling. ... This is one of those documentaries, if you watch the whole thing, you walk away convinced. But if you actually know the whole story, you know that they lined up some very compelling and concerning facts, but they also left out some of the alternative theories and answers to that, so it's going get a lot of attention."

The missile theory, Miller added, does have a couple "Achilles heels." He explained, "If it was a terrorist missile fired by some shoulder launch thing on a boat and you've had a successful attack, you killed 230 people, you downed an airliner. If you don't claim responsibility, you've basically wasted the effort, so why wasn't a credible claim made or discovered after all these years?

"The second part of the missile theory is even darker. There were Navy maneuvers, U.S. Navy maneuvers going off the coast that day and there's a theory that one of their missiles errantly hit the plane, but that would require an awful lot. First of all, the investigators made them account for every piece of ordinance on all those ships. And second of all, it would mean that every person, hundreds of sailors involved in that operation would somehow manage to keep this secret and remain silent and do so forever. That just doesn't happen."

The documentary airs on the EPIX premium television channel.