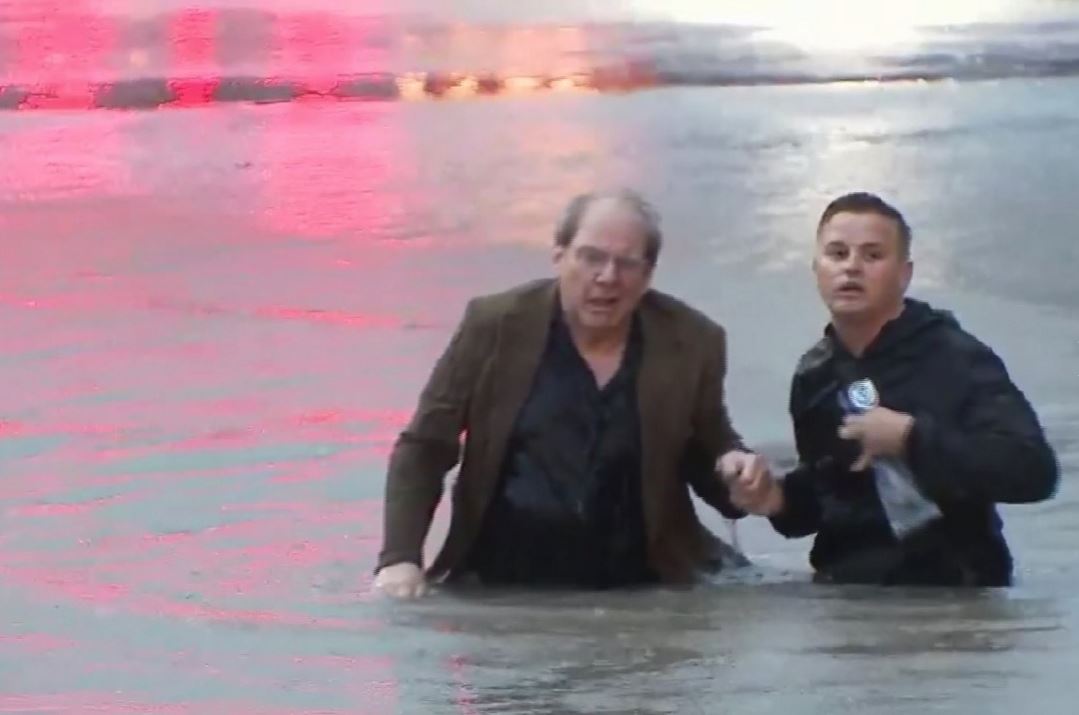 HOUSTON- A TV reporter has helped to rescue a man who drove his car into a flooded underpass in Houston, asrains described as "life-threatening" drenched much of the state.

Officials say the storm may have killed at least four people so far.

In an incident captured on video Monday, KTRK reporter Steve Campion yells, "Dude, you've got to get out of the car!"

The man opens the passenger door and crawls out into the water as the reporter yells: "Leave the car! Swim!"

The driver swims toward Campion, who wades out into the waist-deep water and extends his hand without dropping his microphone.

As the car slowly sinks under water, the driver tells Campion that he's OK and that he didn't think the water was so deep.

Emergency responders have tried to reach several horses trapped in high water near a Houston-area stable where flooding nearly reached the roofs of some buildings.

People driving by on a road near the flooded area stopped to yell encouragement to animals struggling to keep their heads above water Monday.

The horses were seen trying to get over what appeared to be a flood-inundated fence in the area near Cypress Creek.

Harris County officials were trying to reach the Texas Animal Health Commission to try to get a rescue team to the stables just north of George Bush Intercontinental Airport. A number of roads near the airport were flooded Monday.

It appears at least some of the horses were rescued.

More than 1 million students in the Houston area had a weather-related day off Monday because of storms that dumped as much as 16 inches of rain.

More than 40 districts and universities canceled school as heavy rain and flooding inundated parts of Harris County and threatened nearby areas.

The closures included the Houston Independent School District, the largest in Texas with about 215,000 students, plus Texas Southern University and the Houston Community College System.

More than 110,000 Houston area homes and business have lost electricity during storms that flooded roads and grounded hundreds of flights.

CenterPoint Energy crews worked Monday to restore the power lost when up to 16 inches of rain fell in the area.

George Bush Intercontinental Airport in Houston reported an increase in the number of flights canceled to 410 as the storms flooded roads near the airport. William P. Hobby Airport has canceled more than 135 flights.

Gov. Greg Abbott is planning to provide an update on the state's response to the severe weather in an afternoon news conference.

More than 470 flights have been canceled in Houston after storms dumped about 16 inches of rain on the area.

A Houston Airport System statement says some roads are flooded near George Bush Intercontinental Airport, in the north of the state's largest city.

The National Weather Service has issued a flash flood watch for the Houston area through Tuesday morning. Officials say the area received up to 16 inches of rain in the 24 hours through Monday morning.

Mayor Sylvester Turner said city offices were be closed Monday and is encouraging people to stay home and avoid high water areas. Classes have been canceled for the Houston Independent School District's 215,000 students.

Meteorologist Tom Bradshaw says about 70 Houston subdivisions are flooded, as well as parts of Interstate 10.

Flash flood watches have been issued through Tuesday morning for Houston, Austin, San Antonio, Dallas, Fort Worth, Tyler-Longview and as far east as Texarkana.