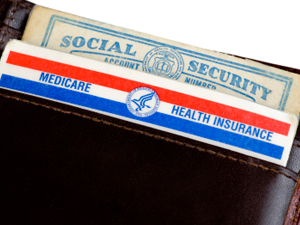 (Credit.com) Last night, in the midst of former President Bill Clinton's speech at the Democratic National Convention, the camera cut away to an audience member holding up what is a familiar sight for the roughly 50 million Americans who participate in Medicare -- a Medicare ID card.

While that ID card was a great image of what Clinton was discussing -- whether Obamacare would mean cuts in benefits for Medicare participants -- that simple act of airing a private citizen's ID card, which displays one's Social Security number as an identifier of their Medicare status, can seriously harm the identity of the citizen.

In fact, the Social Security Administration even says on its own website that, "The potential for misuse of SSNs [that] could result from the need for Medicare recipients to carry their Medicare cards with them is a valid concern."

5 reasons to monitor your credit
8 signs your identity has been compromised
Which credit cards offer the best purchase protection?

The Government Accountability Office even suggested in August that Social Security numbers be removed from all Medicare cards because of the identity theft risk is poses to Medicare participants.

The video of the DNC attendee was aired on multiple stations covering the convention, including but not limited to PBS, ABC and MSNBC. The full video of the speech, including the medicare card moment, are also still up on YouTube. The Medicare card fully displayed the woman's name and Social Security number, something that hackers can now use to steal the citizen's identity, according to Adam Levin, Co-Founder and Chairman of Credit.com and Identity Theft 911.

"It's good to be enthusiastic about a candidate and a cause," Levin says. "It's bad to wave personal identification cards in front of cameras, unless you are Todd Davis and Lifelock will handle your 15 incidents (or more) of identity theft for free."

But not all hope is lost. Here's what Levin advises this citizen to do immediately to help protect herself.

"Now that her information is out there, close monitoring of her credit report, bank accounts and any other financial accounts is the key to discovering fraud and then beginning the process of resolving it," he says.

The first step for any consumer who thinks he or she has exposed their Social Security number to the outside world is to place an initial security alert on your credit report, Levin says. This can be done through any of the three major credit reporting agencies -- TransUnion, Equifax or Experian -- and once you call one, you do not have to call the others. This will essentially flag your credit reports so that creditors know to be extremely careful about releasing any other information about you.

If you spot anything hinky on your credit report (check out these signs that you've been compromised to know what "hinky" means), then you should file an identity theft report with a local or federal government agency to document that your identity has been compromised and then file an extended alert with the credit reporting agencies, which will remain on your credit report for seven years to prohibit identity thieves from lying in wait and then using your identity down the road.

Seems like a lot of work? It is. But it can all be prevented by being careful about how, when and where you share your information. Showing your Social Security number and name on national television can be a costly mistake.

"It is said that cyber security is only as effective as its weakest link. Human beings are the weakest link," Levin says.

This post by Kali Geldis originally appeared on Credit.com.