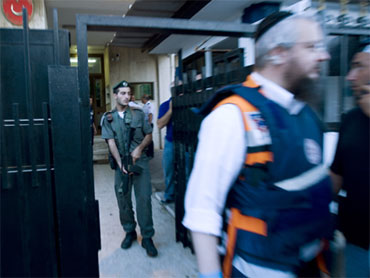 Security guards captured a Palestinian who broke into the Turkish Embassy in Israel Tuesday trying to take hostages and demanding asylum, the Turkish Foreign Ministry said in a statement.

The attacker, wounded by gunfire, was still inside the building six hours after he broke in, with Israeli police and rescue services kept outside by Turkish officials.

"Our embassy guards neutralized the individual as he tried to take the vice consul as hostage after shouting around for asylum," the statement said, adding he was armed with a knife, a gasoline can and a gun that turned out to be a toy.

Israeli Foreign Ministry spokesman Yigal Palmor identified the attacker as Nadim Injaz, a Palestinian from the West Bank town of Ramallah. Israeli police said Injaz was recently released from prison after serving time for an attack on the British Embassy four years ago to seek asylum.

Channel 2 TV played a recording of a phone call it said came from the attacker.

A lawyer who said he spoke to Injaz by phone told Israel Radio that the hostages, the consul and his wife, had escaped.

"I love him and I respect him," he said. The Turkish leader "should give me political asylum against these murderers the Zionists, the murdering Jews," he added, linking the incident indirectly to recent tensions between Israel and Turkey.

Israel-Turkey relations have been strained over the May 31 Israeli attack on an international flotilla that was trying to bust Israel's blockade of the Gaza Strip. The raid killed nine Turkish citizens who were among hundreds of pro-Palestinian activists on board boats carrying aid and many Palestinians have expressed support for Turkey in the aftermath.

Turkey withdrew its ambassador from Tel Aviv after the flotilla attack.

The Israeli Maariv newspaper said the man called the paper, identifying himself as Injaz, the Palestinian who sought asylum at the British Embassy in Tel Aviv in 2006. He said he had a flammable liquid and threatened, "I will kill any Jew that enters."

In London, the British Foreign Office confirmed in a statement that the attacker was the same one involved in the 2006 British Embassy incident.

Around the time of the first attack, police said Injaz was an informer and a criminal with a record of property and drug offenses who had run into financial and legal troubles.

He told an Israeli TV station in 2006 that he feared he would be killed by Palestinian militants if he returned to the West Bank.

Lawyer Shafik Abuani told Israel Radio that he talked to the man three times by telephone, trying to calm him down. The lawyer said Injaz threatened to burn the embassy down if he is not granted asylum.

It was unclear what his relation to the hostage-taker was.

Abuani said Injaz demanded to be flown to Turkey and said he was being persecuted by the Israeli Shin-Bet security force.

The lawyer said only the Turkish consul and his wife were in the building at the time, and they escaped. "I am in touch with the consul all the time by cell phone, and nothing happened to them, they're OK," he said.