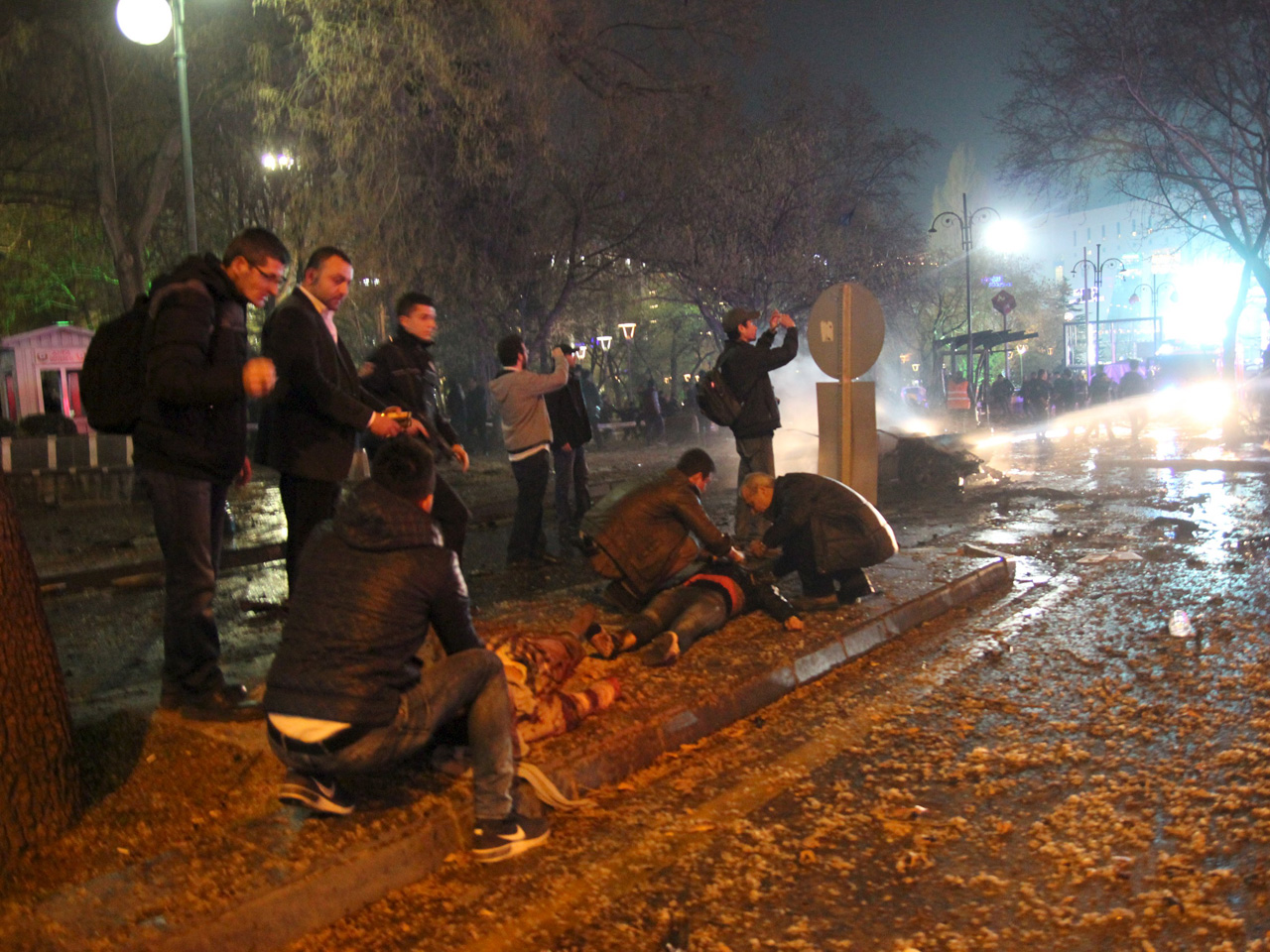 ANKARA, Turkey - A suicide car bomb went off near bus stops in the heart of Turkey's capital on Sunday, killing at least 34 people and wounding around 125 others, officials said.

The blast occurred on the city's main boulevard, close to Ankara's main square and a park.

Health Minister Mehmet Muezzinoglu said 19 of the wounded were in serious condition. He said that 30 of the fatalities died at the scene, while the other four perished at hospitals. Two of the dead were believed to be the assailants, he added.

Interior Minister Efkan Ala said the attack, which came as Turkey prepared to launch large-scale military operations against Kurdish militants in two towns, wouldn't deter the country from its fight against terrorism. He confirmed the blast as a car bomb that targeted civilians at bus stops on Ataturk Bulvari close to Kizilay square.

Ala said authorities had obtained evidence pointing to the group behind the attack, but said an announcement would be made after the investigation is completed, most probably on Monday.

Prime Minister Ahmet Davutoglu was scheduled to travel to Jordan on Tuesday. The Anadolu Agency said Sunday that the visit will take place at a later date.

"We reaffirm our strong partnership with our NATO Ally Turkey in combatting the shared threat of terrorism," the statement read.

British Prime Minister David Cameron says he is "appalled" by the attacks in the Turkish capital and in Ivory Coast.

In a tweet late Sunday, Cameron said: "My thoughts are with all those affected."

The private NTV news channel said several vehicles then caught fire following the blast which also shattered the windows of shops that line the boulevard and the square.

Dogan Asik, 28, said he was on a packed bus when the explosion occurred.

"There were about 40 people," said Asik, who sustained injuries on his face and arm. "It (the bus) slowed down. A car went by us, and 'boom' it exploded."

Police sealed off the area and pushed onlookers and journalists back, warning there could be a second bomb. Forensic teams were examining the scene.

Turkish President Recep Tayyip Erdogan has vowed to bring "terrorism to its knees" following the attack.

Erdogan also said Turkey would use its right to self-defense to prevent future attacks and called for national unity.

Erdogan said: "our people should not worry, the struggle against terrorism will for certain end in success and terrorism will be brought to its knees."

No one has claimed responsibility for the attack, although Kurdish militants and the Islamic State of Iraq and Syria (ISIS) have carried out bombings in the city recently. A far-left militant group is also active in Turkey.

The bombing is the third in the city in five months and comes as Turkey is faced with an array of issues, including renewed fighting with the Kurdish rebels, threats from the Islamic State group and a Syrian refugee crisis.

It occurred just three weeks after a suicide car bombing in the capital targeted buses carrying military personnel, killing 29 people. A Kurdish militant group which is an offshoot of the outlawed Kurdish rebel group, the Kurdistan Workers' Party, or PKK, claimed responsibility for the Feb. 17 attack. The government, however, said that attack was carried out by a Syrian Kurdish militia group in concert with the PKK, which has waged a 30-year insurgency.

Sunday's attack also came two days after the U.S. Embassy issued a security warning about a potential plot to attack Turkish government buildings and housing in one Ankara neighborhood and asked its citizens to avoid those areas.

As with the previous bombings, Turkish authorities quickly imposed a ban Sunday preventing media organizations from broadcasting or publishing graphic images of the blast or from the scene.

The country's pro-Kurdish party, the Peoples' Democratic Party, condemned the attack the attack and said it shares "the huge pain felt along with our citizens." The statement was significant because the party is frequently accused of being the political arm of the PKK - an accusation it denies - and of not speaking out against PKK violence.

Hundreds of people have been killed in Turkey in renewed fighting following the collapse of the peace process between the government and the PKK in July. Authorities on Sunday had declared curfews in two towns in the mainly Kurdish southeast region in anticipation of large-scale military operations against PKK-linked militants.

Turkey also has been struck by several bombings in the last year that were blamed on ISIS as the government joined efforts led by the U.S. to fight the extremist group in Syria. The deadliest came in October when a bombing at a peace rally outside Ankara's main train station killed 102 people.