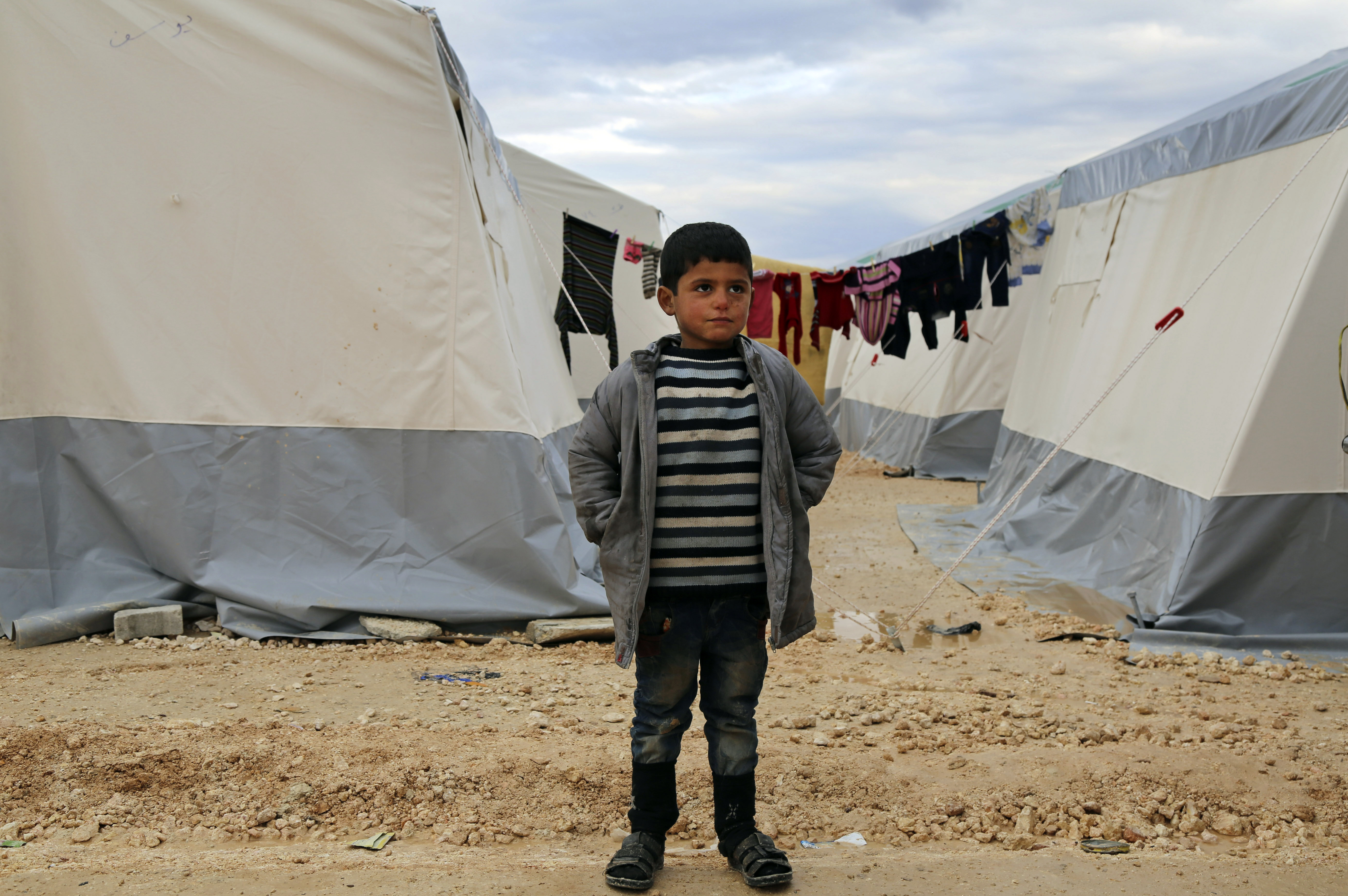 KILIS, Turkey -- Turkey has reached the end of its "capacity to absorb" refugees but will continue to take them in, the deputy premier said Sunday, as his country faced mounting pressure to open its border to tens of thousands of Syrians who have fled a government onslaught.

The United Arab Emirates meanwhile joined Saudi Arabia in saying that it was open to the idea of sending ground troops to Syria to battle the Islamic State of Iraq and Syria (ISIS), raising the possibility of even greater foreign involvement in the five-year-old civil war.

Turkish authorities say up to 35,000 Syrians have massed along the border, which remained closed for a third day on Sunday. The governor of the Turkish border province of Kilis said Saturday that Turkey would provide aid to the displaced within Syria, but would only open the gates in the event of an "extraordinary crisis."

"Turkey has reached the end of its capacity to absorb (refugees)," Kurtulmus said. "But in the end, these people have nowhere else to go. Either they will die beneath the bombings and Turkey will ... watch the massacre like the rest of the world, or we will open our borders."

Kurtulmus said some 15,000 refugees from Syria were admitted in the past few days, without elaborating. He put the number of refugees being cared for on the other side of the border at 30,000.

He did not explain why the Turkish border gate at Oncupinar, opposite the Bab al-Salameh crossing in Syria, was being kept closed or why tens of thousands of refugees were not immediately being let in.

In Syria, pro-government forces pressed ahead with their offensive in the northern Aleppo province, which has caused the massive displacement of civilians toward the Turkish border. Opposition activists said Syrian ground troops backed by Russian airstrikes were engaged in intense fighting with insurgents around the village of Ratyan and surrounding areas north of Aleppo city.

The army has almost fully encircled Aleppo, Syria's largest city and one-time commercial center, preparing the way for a blockade. The main supply line to the Turkish border has already been cut and many residents of the city were looking to leave, anticipating severe shortages in coming days.

Dr. Ahmad Abdelaziz, of the Syrian American Medical Society, a humanitarian organization, said there were only four general surgeons for the entire city.

"The people there are very worried there could be a siege at any time. We expect a lot of people to get out of the city if the situation remains like this, if there is no improvement," he said.

Abdelaziz, who goes in and out of Aleppo but spoke to the AP from the Turkish city of Gaziantep, described a dire scene at the border and said it was difficult to get medicine to the people gathered there.

"There are so many old people and children in the cold weather... They are surrounded by ISIS from the east, the regime from the south and Kurdish forces from the west," he said, using an acronym for ISIS.

On Saturday, the European Union urged Turkey to open its borders, saying it was providing aid to Ankara for that purpose. EU nations have committed $3.3 billion to Turkey to help refugees, part of incentives aimed at persuading Turkey to do more to stop thousands of migrants from leaving for Greece.

Kurtulmus estimated that "in the worst case scenario" as many as 1 million more refugees could flee Aleppo and surrounding areas.

The Syrian uprising began in March 2011 with mostly peaceful protests but escalated into a full-blown civil war after a harsh government crackdown. The fighting has killed more than 250,000 people and forced millions to flee the country.

The war has drawn in regional and international rivals, with a U.S.-led coalition launching airstrikes against the ISIS and Russian warplanes backing Syrian President Bashar Assad's forces.

The Lebanese Hezbollah group has sent thousands of fighters to back Assad while Iran has dispatched what it refers to as "military advisers," many of whom have been killed in combat in recent weeks.

Saudi Arabia -- one of the main backers of the rebels battling to topple Assad -- said last week it was willing in principle to send ground troops to battle ISIS.

The United Arab Emirates' Minister of State for Foreign Affairs Anwar Gargash echoed that pledge Sunday, saying "we have been frustrated at the slow pace of confronting Daesh," using the Arabic acronym for ISis. He stressed that any deployment would be relatively small, saying: "We're not talking about thousands of troops."

Even a small force, however, could alarm Damascus and escalate regional tensions even further. On Saturday, Syrian Foreign Minister Walid al-Moallem said any Saudi or other foreign ground troops who enter Syria would "return home in wooden coffins."

Meanwhile, more than a million refugees were welcomed by Germany, but the welcome there is wearing thin.

When they saw the suffering of so many migrants, Germans opened their arms like no other country in Europe. Tübingen Mayor Boris Palmer was among them.

"We had people drowning in the Mediterranean Sea and I found that appalling and terrible," he told CBS News' Charlie D'Agata.

But the mayor of this university town of 80,000 has had a change of heart.

"If you have several hundred thousand men, who come to your country as singles and live in sports halls and town halls, what do you expect him to do?" said the mayor. "They have no privacy and they have no contact to women. And how long will that happen without any outbreak of violence?"

For many Germans, the tipping point was New Year's Eve in Cologne.

Police and witnesses said gangs of drunken men -- including many North Africans and Arabs -- groped and assaulted hundreds of women in the crowd. Police are investigating 380 complaints, including rape.

Seattle University student Caitlin Duncan lost her boyfriend in the mayhem that night.

"Someone reached up my jacket," she said. "I was in a crowd so I was kind of twisting turning hitting kicking so it was all happening pretty quickly, people grabbed between my legs, my head, my face."

She didn't get a good look at her attackers, but she said they were all shouting in Arabic. She was rescued by a group of Syrian migrants.

"I was just so relieved," she said. "Then they all kind of hugged me, Caitlin it's going to be okay, you're safe now, don't cry."

Duncan said she came forward to show that not all migrants should be blamed. Thirty-three arrests have been made so far, two thirds are asylum seekers.

"The numbers have to decline or else there will be breakdowns in German cities and communities," he said.