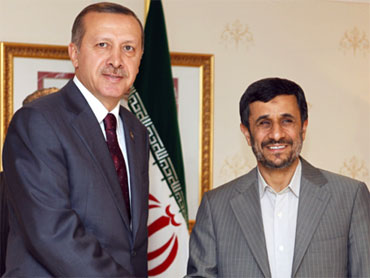 (AP Photo/Murad Sezer)
Turkey has sought to allay Western fears that the country — NATO's only majority-Muslim member — is shifting its affinity from Washington and Europe toward Iran.

Increasing closeness between Turkish leaders and Iran, and Turkey's quest for better ties in the broader Muslim world, have fueled concerns in the West that this key U.S. ally is moving gradually to the East.

But Turkey's president used a speech Monday at the opening of an Islamic nations' summit in Istanbul to try and ease worried Western minds.

President Abdullah Gul told the Organization for the Islamic Conference's Committee for Economic and Commercial Cooperation (COMCEC) that Turkey's foreign policy maneuvers in the West and in the East are "complementary to each other, not contradictory."

"As a concrete indication showing the evaluation of global developments and geographical needs together, Turkey is in intense commercial and economic relations with both the Western world and Islamic countries. The European Union membership process pursued by our country and its efforts within COMCEC are complementary elements of our foreign policy, but are not elements which exclude each other," Gul told the gathering.

Turkey, a nation of more than 76 million, has indeed found its role on the world stage. Leaders have been marketing the country as a bridge between Western and Eastern cultures, hoping to act as a global power broker in a new international order.

The push for a larger role in global politics was a direct result of Prime Minister Recep Erdogan's "Justice and Development Party" rising to power in 2002.

The party followed a "zero problems with the neighbors" policy, and, in record time, managed to strike an agreement with Armenia, a strategic deal on opening the border with Syria, at least 48 accords with Iraq and a new energy deal with Russia.

In late October, the latest deal saw Turkey's Prime Minister — likely acting in no coordination with Ankara's allies in NATO and the European Union - agree with Iranian President Mahmoud Ahmadinejad, whom he called "a friend," to promote trade and strengthen other bilateral ties.

But the diplomatic push may mean new problems with old friends.

From the Arab point of view, the most dramatic development has undoubtedly been the cooling of Turkey's relations with Israel. In January this year, Erdogan made headlines when he directed a high-tempered attack at Israel over the Gaza war, for which the U.N. charged Tel Aviv with war crimes.

In September, Turkey, which was also hosting indirect peace negotiations between Syria and Israel, cancelled the annual joint military maneuvers with U.S. and Israeli troops on the ground that Ankara, as put by Erdogan himself, "does not want Israeli war fighters, which killed innocent civilians in Gaza, to fly its skies."