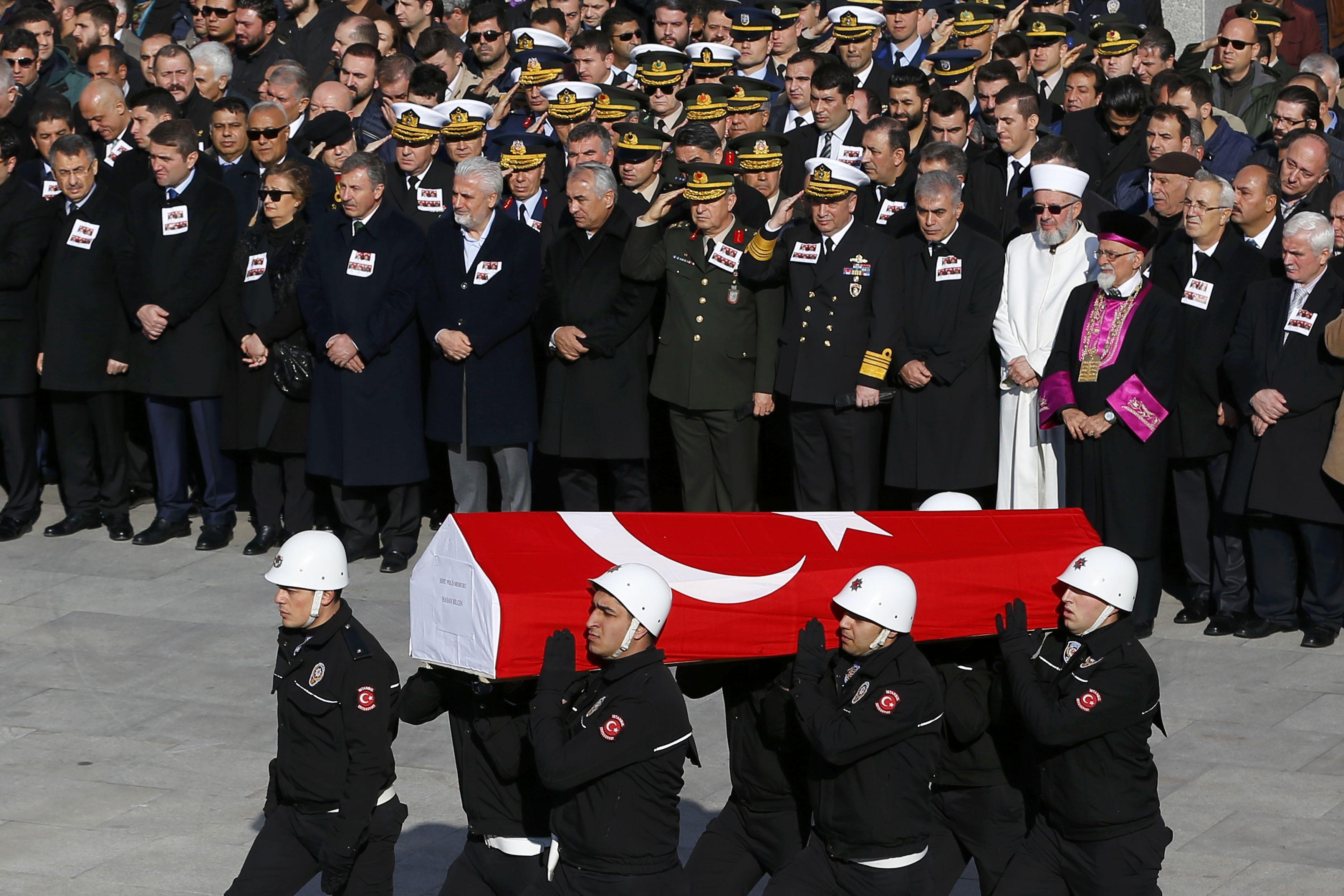 ISTANBUL - Turkey declared a national day of mourning, launched a full investigation and paid tribute to the dead Sunday after two bombings in Istanbul killed 38 people and wounded 155 others near a soccer stadium. The attack was claimed by a Turkey-based Kurdish militant group.

In a statement posted on its website, the Kurdistan Freedom Falcons, or TAK, said two of its members had sacrificed their lives in the Saturday night attack that targeted security forces outside a stadium shortly after the conclusion of a soccer match.

“Two of our comrades were heroically martyred in the attack,” the statement read. It said the attack was reprisal for state violence in the southeast and the ongoing imprisonment of Abdullah Ocalan, the leader of the Kurdistan Workers’ Party, or PKK. TAK is considered by authorities as a PKK offshoot.

The attack seemed to corroborate the official version of events although it gave a higher toll for the dead and wounded.

The twin car-and-suicide bombings Saturday night near the Besiktas stadium enraged top officials, including President Recep Tayyip Erdogan, who vowed to hunt down the perpetrators. The attack was the latest large-scale assault to traumatize a nation confronting an array of security threats.

The attack targeted police officers, killing 30 of them along with seven civilians and an unidentified person, Turkish Interior Minister Suleyman Soylu told reporters Sunday. He said 13 people had been arrested in connection with the “terrorist attack” and that authorities had some insight into how and when it was planned.

Senior officials had quickly said they suspected Kurdish militants were behind the violence.

Deputy Prime Minister Numan Kurtulmus told the private news channel CNN Turk that “arrows point to the PKK,” the outlawed Kurdistan Workers’ Party, which has waged a decades-long insurgency. That assessment was echoed by Erdogan and Soylu.

“Our friends’ evaluations suggest that the PKK was the perpetrator. There is a framework as to how the act was planned, when it was planned and how it was executed,” Soylu said, declining to disclose details for fear of compromising the investigation.

In a furious address Sunday at a funeral for the slain police officers, Soylu slammed Kurdish rebels and their allies in the West, referring to the PKK as “animals.”

“Have you accomplished anything beyond being the servants, pawns and hit men of certain dark forces, of your dark Western partners?” he asked.

The PKK has waged a decades-long insurgency against the Turkish state, a battle that has resulted in the deaths of tens of thousands of citizens. Turkish officials frequently accuse the West of directly and indirectly supporting the Kurdish insurgency and of interfering in Ankara’s fight against terrorism.

Erdogan vowed his country would fight “the curse of terrorism till the end” after paying a visit to some of the wounded at Haseki Hospital in Istanbul.

Surrounded by a crowd chanting his name and “God is great!”, Erdogan vowed that the perpetrators would be found and forced to “pay an even heavier price.”

Hundreds of flag-carrying demonstrators marched Sunday along Istanbul’s coastline toward the stadium at the heart of the blast area. Flags flew at half-staff across the country and at Turkey’s foreign missions. Passers-by placed flowers on barriers surrounding the soccer stadium.

The first and larger explosion took place about 10:30 p.m. Saturday after the home team Besiktas beat visitor Bursaspor 2-1 in the Turkish Super League. Erdogan said the timing of the attack aimed to maximize the loss of life but most fans had left before the explosions.

Soylu said the first explosion was caused by a passing vehicle that detonated in an area where police special forces were located at the stadium exit. A riot police bus appears to have been the target.

Moment later, a person who had been stopped in nearby Macka Park committed suicide by triggering explosives, according to the minister.

Soylu said 136 people remained hospitalized Sunday after the attack, including 14 in intensive care.

A video posted on social media appeared to show the moment of the blast with a fireball rising from the ground in the distance. It was followed several seconds later by a series of violent booms.

Forensic experts in white uniforms worked overnight, scouring the vicinity of the stadium and the vast park where the suicide bombing took place. Glass from the blown-out windows of nearby buildings littered the pavement.

Experts have determined that up to 400 kilograms (880 pounds) of explosives were used in the car bomb, Kurtulmus told CNN Turk.

At noon, to the mournful sound of trumpets, funeral services were held at Istanbul’s police headquarters for some of the slain police officers with the country’s top brass in attendance. Their comrades solemnly carried the coffins, which were draped in the Turkish flag, as a sea of mourners wept around them.

The state-run Anadolu Agency reported that Erdogan was presiding over a security meeting in Istanbul on Sunday.

This year Istanbul has seen a spate of attacks attributed by authorities to the Islamic State group or claimed by Kurdish militants. A state of emergency is in force following a failed July 15 coup attempt and the resulting government crackdown on alleged coup sympathizers has landed thousands in jail and forced tens of thousands of people from their jobs. Critics call the move a witch hunt.

Saturday’s bombings were one of the bloodiest to hit the bustling city at the crossroads of Europe and Asia. A triple suicide-and-gun attack on the city’s Ataturk Airport in June killed 44 people and wounded scores of others. Kurdish-linked militants have claimed other deadly attacks in Ankara, Istanbul and areas in southeast Turkey.

The steady stream of violence has delivered a bitter blow to Turkey’s tourism sector, a mainstay of the country’s economy.

Turkey is a partner in the U.S.-led coalition against the Islamic State and its armed forces are active in neighboring Syria and Iraq. It is also facing a renewed conflict with an outlawed Kurdish movement in the southeast.

The attack was condemned by a range of Turkish politicians, by sports organizations like Besiktas, Bursaspor and UEFA, and by U.S., EU and Israeli officials.

Turkey’s pro-Kurdish People Democratic Party, or HDP, issued a statement “strongly condemning” the attacks and saying it “felt great sadness and shared in the sorrow.”

Turkish authorities have routinely accused the party of being linked to the PKK and backing terrorism. The party, which had both of its leaders detained in terror probes and multiple elected officials arrested or removed from office in the southeast, denies the charge.

The chair of the main opposition Republican People’s Party also condemned the attack.

Ned Price, a spokesman for the White House National Security Council, said Washington condemned the attack in “the strongest terms.”

Israeli Prime Minister Benjamin Netanyahu said at his Cabinet meeting Sunday that “Israel condemns any terror in Turkey, and Israel expects Turkey to condemn any act of terror in Israel. The battle against terror must be mutual.”

Turkey’s radio and television board imposed a temporary coverage ban immediately after the attack, citing national security concerns. Three people were detained for social media posts relating to the blasts, according to Istanbul prosecutors.