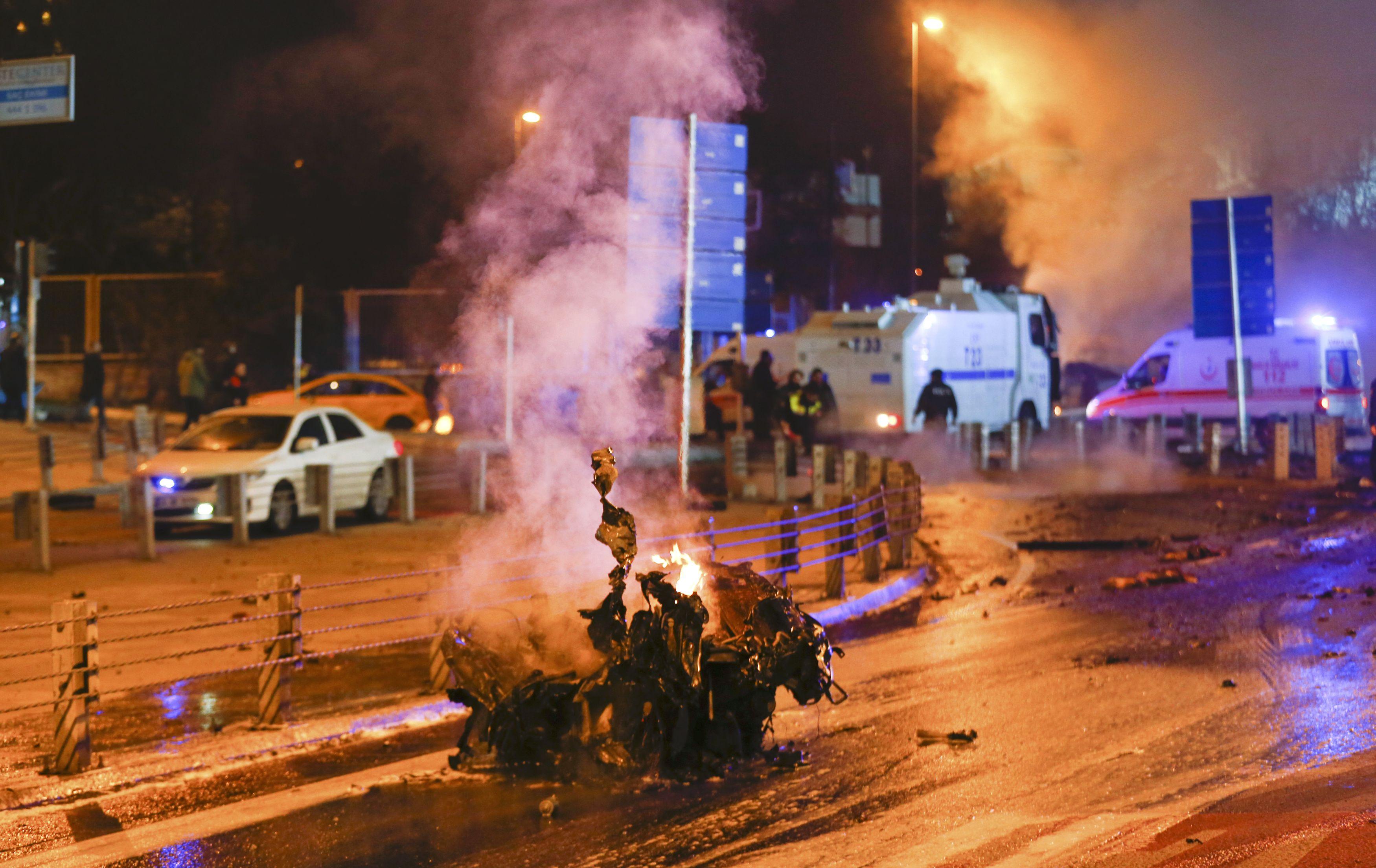 Turkish President Recep Tayyip Erdogan issued a statement saying “unfortunately we have martyrs and wounded” but did not specify the number. According to a government statement, 29 people were killed and 166 injured. Twenty-seven of those killed were police, the statement said.

Riot police were targeted, the government statement said.  A car bomb exploded outside the stadium and 45 seconds later suicide bomber blew himself up in Macka Park.

Ten people are currently in custody, the government said.

Police cordoned off the area as smoke rose from behind the newly built Vodafone Arena Stadium, known colloquially as Besiktas Stadium after the local team and neighborhood. Witnesses also heard gunfire after the explosions.

The first and larger explosion took place about 10:30 p.m. after the home team Besiktas beat visitor Bursaspor 2-1 in the Turkish Super League. Officials gave no immediate details on the nature of the second explosion, which sounded like it came from the same area.

A video posted on social media appeared to show the moment of the blast with a fireball rising from the ground in the distance. It was followed several seconds later by a series of violent booms.

The big question is who might be responsible if it is indeed what it looks like: a terror attack, CBS News’ Holly Williams reported from Istanbul. Turkey over the last couple of years has suffered a spate of suicide and car bombings -- some attributed to the Islamic State of Iraq and Syria (ISIS) and others carried out by Kurdish militants.

ISIS released an audio recording earlier this week calling on its followers to attack Turkish interests wherever possible, including security, military and the media, Williams reports.

The U.S. Consul General in Istanbul, Jennifer L. Davis, issued a statement to CBS News calling the bombings acts of terrorism. “The United States condemns tonight’s cowardly attack and stands with the people of Turkey in the fight against terrorism,” the statement read.

The White House issued a statement from National Security Council director Ned Price condemning in the “strongest terms the terrorist attack” in Istanbul. “We stand together with Turkey, our NATO Ally, against all terrorists who threaten Turkey, the United States, and global peace and stability,” the statement read.

However, there was no immediate claim of responsibility either from ISIS or any other group or individual. In cases of terror attacks carried out by Kurdish militants over the last couple of years, security forces and the police have been a frequent target.

“It is thought to be a car bomb at a point where our special forces police were located, right after the match at the exit where Bursaspor fans exited, after the fans had left,” Interior Minister Suleyman Soylu was quoted as saying by Turkey’s state-run Anadolu Agency.

He said the explosion took place on a hill adjacent to and overlooking the stadium.

Television images showed more than a dozen ambulances on a street hugging the stadium and a police helicopter flying overhead with its searchlights on. The window glass of nearby buildings was shattered by the blasts and coated the pavement. Investigators, including Istanbul Police Chief Mustafa Caliskan, were quickly on the scene.

The Besiktas sports club “strongly condemned” terrorism and the attack in a statement posted on its website.

Bursaspor said none of the wounded were fans and issued a statement saying “we wish a speedy recovery to our wounded citizens.”

Turkey’s radio and television board issued a temporary coverage ban citing national security concerns. It said “to avoid broadcasts that can result in public fear, panic or chaos, or that will serve the aims of terrorist organizations.”