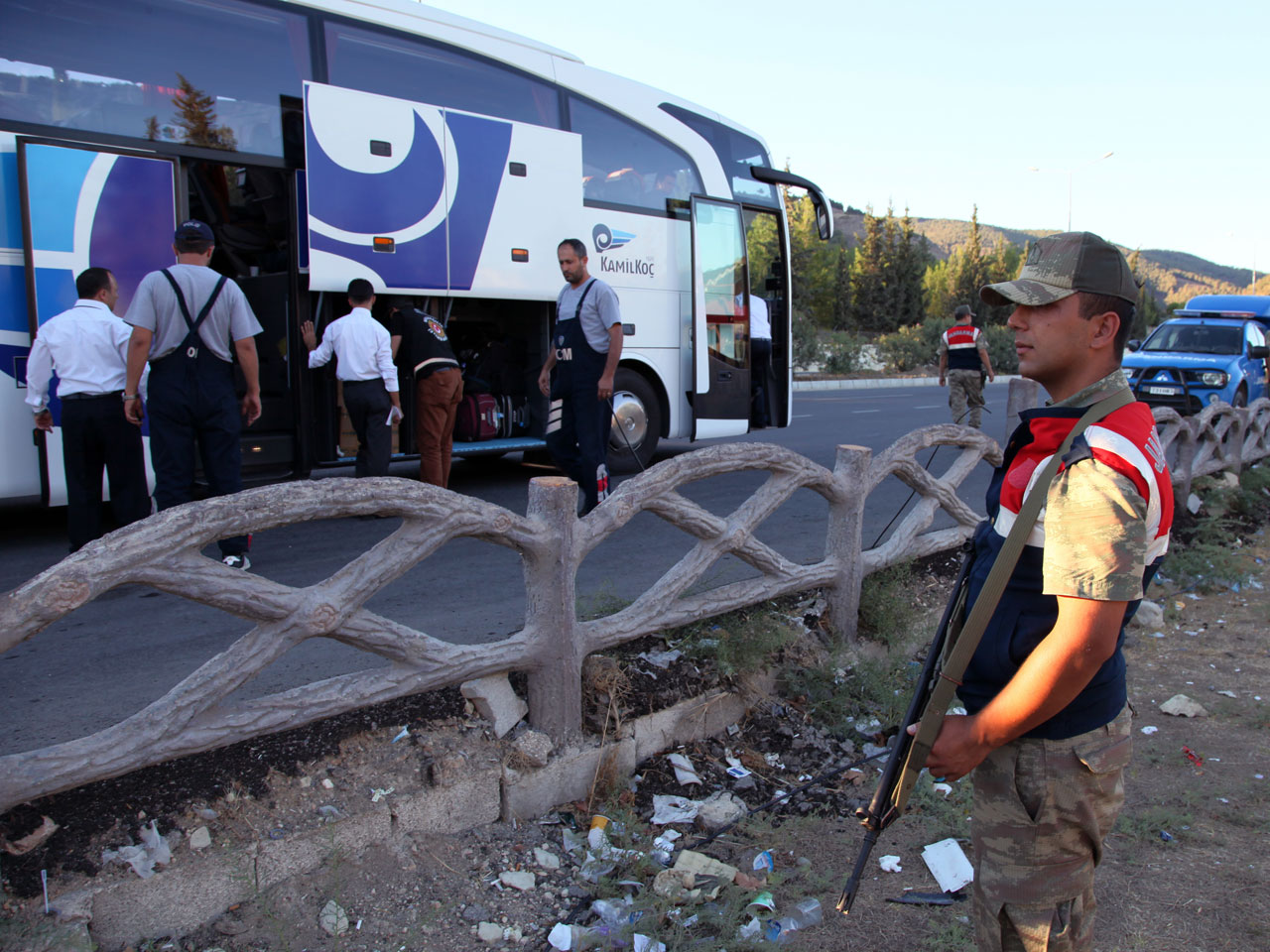 HACIPASA, Turkey - Sevda, a 22-year-old waitress in a brown apron, recounts how she made a small fortune running smuggled diesel from a village on Turkey's wild and dangerous border with Syria. But the days when she could earn 20 times her salary waiting tables came to an abrupt end several months ago when police arrested her and slapped her employers with a massive fine.

The smuggled fuel came from oil wells in Iraq or Syria controlled by militants, including the Islamic State of Iraq and Syria (ISIS, also known as ISIL), and was sold to middlemen who smuggled it across the Turkish-Syrian border. Western intelligence officials have alleged that Turkey is turning a blind eye to a flourishing trade that strengthens ISIS, and Secretary of State John Kerry has called on Turkey to do more to stem the trade. Analysts estimate that the Islamic State group gets up to $3 million a day in revenue from oil fields seized in Iraq and Syria.

But in about two dozen interviews, Turkish authorities, smugglers and vendors along Turkey's 900-kilometer border with Syria paint a remarkably similar picture: Oil smuggling was a booming business until about six months ago, when Turkish authorities ramped up a multi-layered crackdown that has significantly disrupted the illicit trade. Many of those interviewed, including Sevda, gave only their first name or asked for anonymity out of fear of reprisals by authorities or smugglers, who believe that reports in the Turkish news media led to the crackdown.

Turkish authorities say they have beefed up border controls, arrested dozens of smugglers and have gone after consumers with an extensive stop-and-search operation on Turkish highways where fuel tanks are tested for smuggled oil. The AP accompanied police on a tour of anti-smuggling measures in Hatay province, which has been the main smuggling conduit, observing new checkpoints and border patrols.

Turkey says it seized nearly 20 million liters of oil at the border in the first eight months of this year, about four times as much as in the same period the year before, while illicit fuel discovered on consumers has dropped considerably.

At the peak of Turkey's oil smuggling boom, the main transit point was a dusty hamlet called Hacipasa on the Orontes River that marks the border with Syria. Hacipasa has been a smuggling haven for decades, authorities and residents say. As in other border towns, many families straddle the frontier and trade commodities like sugar and cigarettes back and forth without customs controls.

But Syria's civil war and the capture of oil wells by ISIS militants opened a giant market that made moguls out of some locals.

"Some people multiplied their wealth a thousand fold in a few months," says a local gas station owner who declined to be named.

Over tea in his immaculate office, the chain-smoking man who has spent his life along the border says he witnessed the boom and the bust of the smuggling business. As smuggling took off last year and cheap has from across the border became readily available, 80 percent of his legal diesel business disappeared, he said. Since Turkey launched its crackdown, most of it has come back and business is now only 20 percent off what it used to be.

In many points along the Syrian border, diesel smuggling has been done on a small scale, according to smugglers and dealers. But some in Hacipasa figured out how to take it to a higher level, using scores of illicit pipelines under the Orontes. The pipelines were up to three kilometers long and laid up to 15 meters deep, dug using sophisticated imported vehicles with equipment designed to lay fiber-optic cables that costs hundreds of thousands of dollars each, according to authorities and some of those involved. The diesel, crudely refined in Syria, emerged from of spigots in cotton fields in Hacipasa and nearby towns, where eager buyers lined up.

Local authorities began digging up those pipelines months ago, cutting off perhaps the biggest source of smuggled oil in the market.

Sevda is an acquaintance of a journalist who works for AP and has been based in Turkey for many years. She agreed to be interviewed on condition that she be referred to only by her first name, which she wore on her waitress' apron.

She says that once a week she would coordinate oil runs, sitting next to the driver on 10-hour truck trips from Hacipasa with thousands of liters of diesel to a company in the Anatolian city of Denizli, earning $6,500 a trip. She could make less money on quick local trips in a Mercedes sedan with a secret extra gas tank. Her description of the diesel trade near Hacipasa is consistent with AP's reporting on the border with Turkish police and people involved in oil smuggling.

"Everyone was doing it," she says with a giggle. "It was so much money."

About six months ago, the smuggling was so rampant, Sevda says, that trucks and cars with buyers were often backed up on the windy old road to Hacipasa. The arrest ended her smuggling career. She says she was released and the company that had been buying diesel from her negotiated down a fine of more than $60,000 to half that, and paid it.

Turkish authorities, including top officials from the police, border guard and gendarmerie paramilitary police, say the crackdown began last year but took off in the last six months- a period in which Turkey came under increasing pressure from allies, including the United States, concerned that ISIS was funding itself largely from the illicit oil trade.

The extremist group has taken over large sections of Syria and Iraq, and has until recently controlled as many as 11 oil fields in the two countries, analysts say. Within Iraq and Syria, the group sells oil to middlemen at a significant discount. Some of that is smuggled into Turkey, while much is sold locally. In recent days, a U.S.-led coalition against ISIS has been targeting refineries in the two countries.

Turkish authorities say the crackdown grew out of concern for internal security and the loss of tax revenues. While they acknowledge that smuggling was once rampant, they dismiss accusations that they have tacitly allowed the extremists a revenue stream out of sympathy for any opponent of the Syrian government.

"If you look at the measures that have been taken in the last two years, and specifically the last year, you will see that Turkey isn't allowing these kinds of activities at all," says Cemalettin Hasimi, an adviser to the Turkish prime ministry, arguing that even the United States struggles to effectively patrol its borders. "If the U.S. had resolved smuggling on the Mexican border then probably Turkey would have done the same thing. ... It's the most difficult thing to do."

But Fehim Tastekin, a Turkish journalist who reported on the smuggling in Hacipasa before the crackdown, says that Turkish soldiers once watched without intervening and only cracked down after an international outcry.

"How is it not possible for authorities not to see what I saw as a journalist?" he says. "How could they not smell the smell of oil?"

He estimates that the crackdown has cut down smuggling by 70 to 80 percent, but thinks it is still going on in Hacipasa on a smaller scale and says the authorities could be more aggressive.

Hatay authorities say they began ramping up efforts after a violent incident in May 2013, when security forces confronted a group of diesel smugglers in a town near Hacipasa. Ten people were killed in an explosion, according to authorities, when a smuggler lit a container of diesel. After that, authorities built up infrastructure, adding checkpoints and digging trenches along the border, tripling patrol vehicles and using advanced radar systems.

Over the last five months, police in Hatay say they have arrested 38 people involved in smuggling, and since June of last year levied over $5.7 million in fines.

On a tour of operations in Hacipasa and other spots with Hatay authorities, the AP saw recently made trenches and observation stations. According to Hatay Lt. Governor Orhan Mardinli, officials added 783 personnel to work in 56 locations around the province, around the clock.

"Security measures are at the highest leve at ground zero (on the border) where contraband oil was being smuggled," he said.

The AP also observed police pulling over trucks and buses and searching them for smuggled oil. Police were checking the vehicles for hidden compartments and drawing samples from fuel tanks. Because Turkish refineries use an additive that marks legitimate diesel, smuggled diesel can be easily identified. Police showed a reporter dozens of samples of suspicious diesel that was labeled with vehicle and driver details and was being sent to a laboratory for eventual use in court.

A few hours' drive to the east, at the Oncupinar border crossing, near the Turkish city of Kilis, truckers who work across the border say that until last year, they used to sneak back with tanks loaded with illicit Syrian diesel, but the fines dissuaded them. "If you bring even 10 liters across, you get big fines," says Ibrahim Akalin, a trucker who was waiting to bring a load of concrete into Syria.

Illicit diesel in small quantities is still easy to find in many Turkish cities along the border, evidence smuggling cannot be completely eliminated. At a gas station in Akcakale, a six-hour drive from Hacipasa, an attendant led a reporter warily behind the station after being asked about "cheap diesel." The discounted fuel was available from a rusty tank with an electric pump, for about a third of the price of legal diesel.

But smugglers say that business is now much harder. One lifelong smuggler in a village near Akcakale says that diesel is sometimes carried across at night, or pumped for a few hours through hoses laid over the border at night and removed before dawn.

"Things are so tough. I have never seen it like this in 40 years," says the elderly man, who rolled cigarettes on an oriental carpet while telling stories of sneaking across the border. "If there was any good business in smuggling, I would be leading it. Believe me, I was the king - but that life is over."