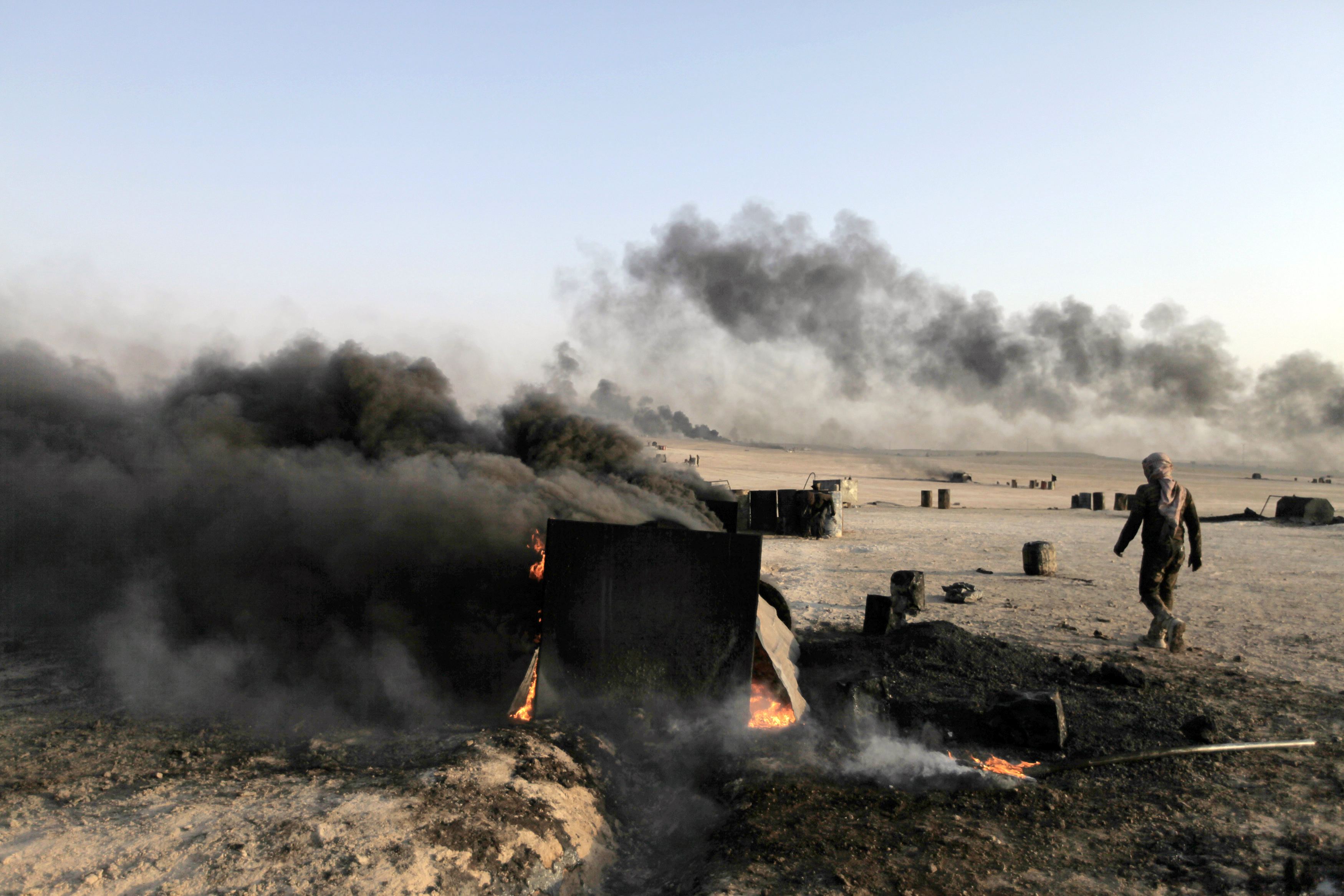 The latest strikes came on the third day of a U.S.-led air campaign aimed at rolling back ISIS in Syria, and as CBS News' David Martin reports, they didn't target ISIS militants and weapons as the attacks earlier in the week, but infrastructure used by the militant group to rake in money.

Martin says 12 small-scale oil refineries were hit in the eastern desert of Syria. According to the Pentagon, the refineries produced between 300 and 500 barrels of petroleum a day, which ISIS used to power its own vehicles and to sell on the black market, bringing in up to $2 million every day in revenue.

The strikes were carried out by the U.S. Air Force and by aircraft from the United Arab Emirates and Saudi Arabia. Arab jets hit seven of the refineries and American aircraft the other five, says Martin, and a total of 18 aircraft took part. All of them returned safely to their bases. Along the way, one of the jets spotted an ISIS vehicle and attacked it as well.

Pentagon officials said initial indications were that all 12 of the refineries were knocked out of commission, but Martin points out that ISIS still has other sources of revenue, such as robbing banks and demanding ransom for kidnapping victims.

The U.S. has been conducting air raids against the group in neighboring Iraq for more than a month.

ISIS captured most of Syria's largest oil fields earlier this year and is believed to be partly funding its operations by smuggling oil out and selling it on the black market.

At least four oil installations and three oil fields were hit around the town of Mayadeen in the eastern province of Deir Ezzor, according to the Britain-based Syrian Observatory for Human Rights and two local activist groups.

At least 14 militants were killed, said the Observatory, which gathers information from a network of activists on the ground. Another five people who lived near one of the refineries in the northeastern al-Hasakah province were also killed, the Observatory said, adding that they were likely the women and children of the militants.

Two activist collectives reported higher death tolls. It is common to have conflicting casualty figures in the chaotic aftermath of such events.

The planes came "with a terrifying sound and red lights before the explosions," one activist wrote, documenting each explosion.

The militants meanwhile freed at least 150 people from a prison in their de facto capital of Raqqa in northeastern Syria, fearing more strikes, according to activists there.

Other strikes hit checkpoints, compounds, training grounds and vehicles of the Islamic State throughout the territory they hold along the Euphrates River in northern and eastern Syria, with strikes hitting near the Turkish and Iraqi borders.

The raids targeted Syrian military bases seized by ISIS, including the Brigade 93 and Tabqa bases. They also hit a building used as an Islamic court and a cultural center in the town of Mayadeen, the activists reported.

The Observatory said other airstrikes targeted the Nusra Front, a Syrian al Qaeda affiliate that has fought against ISIS, and which is one of the most powerful groups fighting to overthrow Syrian President Bashar Assad. The strikes against the Nusra Front suggest a wider operation targeting other Syrian militants seen as a potential threat to the United States.

It was not immediately clear whether those reported strikes targeted Nusra militants, or members of the so-called "Khorasan" unit linked to the group. As Martin reports, the U.S. strikes on Monday night hit Khorasan, which was believed to be plotting attacks against Europe and possibly the U.S. homeland.

The Observatory also reported airstrikes near a northern Kurdish area that ISIS militants have been attacking for nearly a week now, causing the flight of over 150,000 people to neighboring Syria. But it was not immediately clear who was conducting the strikes southwest of the area known as Kobani, or Ayn al-Arab.