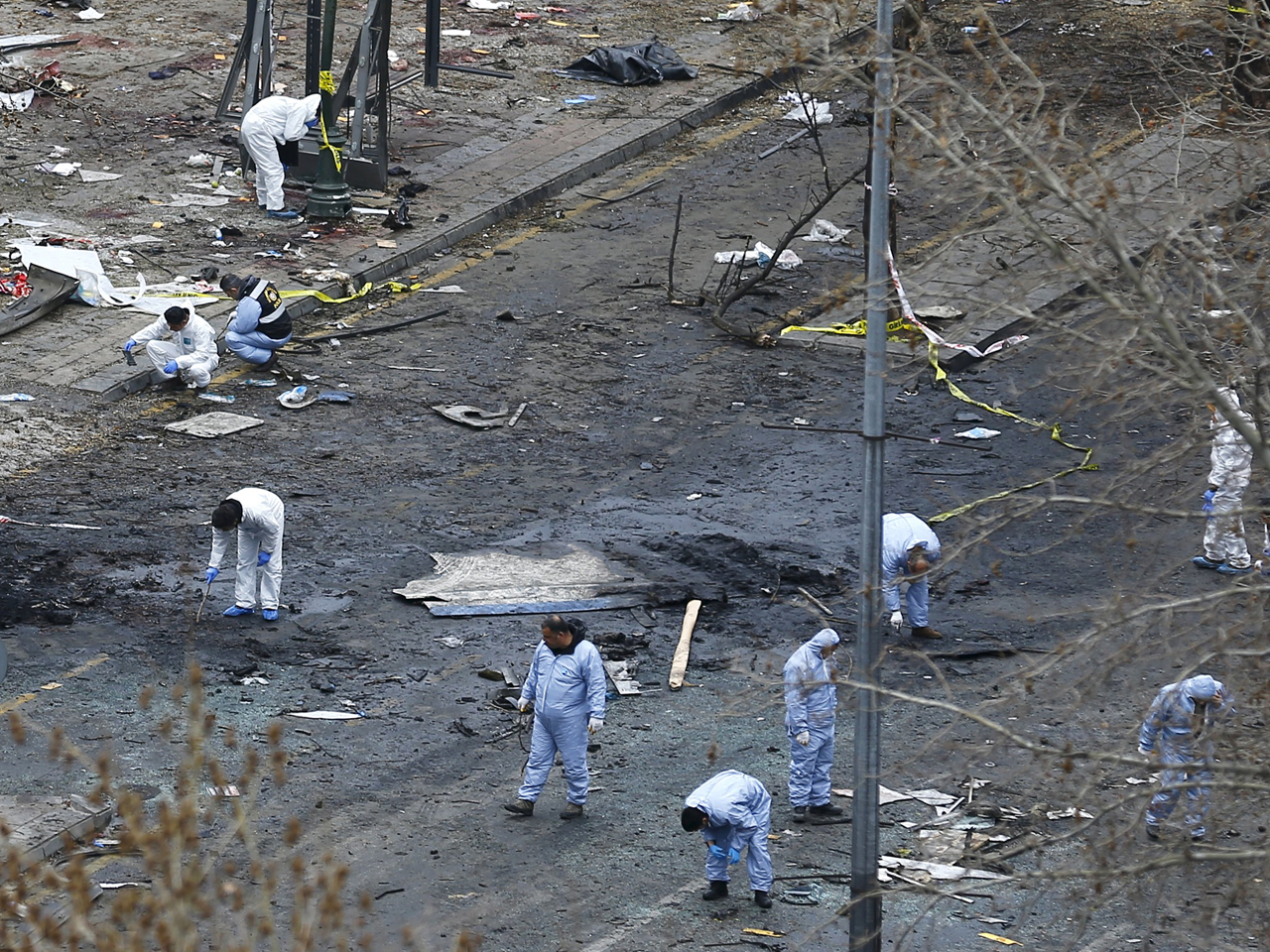 Anadolu Agency says nine F-16s and two F-4 jets raided 18 positions of the Kurdistan Workers' Party, or PKK in the northern Iraq, including the Qandil mountains where the group's leadership is based.

Police meanwhile carried out raids in the southern city of Adana, detaining suspected rebels of the outlawed PKK, the agency reported. The private Dogan news agency said at least 36 suspects were taken into custody.

Health Minister Mehmet Muezzinoglu said three more people died overnight from wounds suffered in the Sunday night attack that targeted buses and people waiting at bus stops at the heart of Ankara. Scores of others were injured.

Two days before the bombings, the U.S. Embassy in Ankara warned of "information regarding a potential terrorist plot to attack Turkish government buildings and housing located in the Bahcelievler area of Ankara," and said U.S. citizens should avoid the area.

It was not immediately clear whether the information which prompted the U.S. warning was related to the attack a couple days later in a more central part of the capital. Bahcelievler is a southwest suburb of the city.

A senior government official told The Associated Press that authorities believe the attack was carried out by two bombers -- one of them a woman -- and was the work of Kurdish militants. He spoke on condition of anonymity because the investigation is continuing.

It was the second deadly attack blamed on Kurdish militants in the capital in the past month and President Recep Tayyip Erdogan vowed to bring "terrorism to its knees."

On Feb. 17, a suicide car-bombing in the capital targeted buses carrying military personnel, killing 29 people. A Kurdish militant group which is an offshoot of the PKK claimed responsibility.

Sunday's blast came as Turkey's security forces were set to launch large-scale operations against militants in two mainly Kurdish towns -- Yuksekova, near the border with Iraq and in Nusaybin, which borders Syria -- after authorities imposed curfews there, prompting some residents to flee. The military deployed large numbers of tanks near the towns as the curfews were announced.

Turkey has been imposing curfews in several flashpoints in the southeast since August to root out militants linked to the PKK, who had set up barricades, dug trenches and planted explosives. The military operations have raised concerns over human rights violations and scores of civilian deaths. Tens of thousands of people have also been displaced by the fighting.

Last week, Turkey's military ended a three-month operation against the militants in the historic Sur district of Diyarbakir -- the largest city in the country's mostly Kurdish southeast. On Sunday, authorities eased the curfew in some streets and one neighborhood of Sur, but the siege over the district's main areas was still in place.

The PKK has been designated a terrorist organization by Turkey, the U.S. and the European Union. A fragile peace process between the PKK and the Turkish state collapsed in July, reigniting a battle that has cost tens of thousands of lives since 1984.

Turkey also has been struck by several bombings in the last year that were blamed on ISIS as the government joined efforts led by the U.S. to fight the extremist group in Syria. The deadliest came in October when a bombing at a peace rally outside Ankara's main train station killed 102 people.