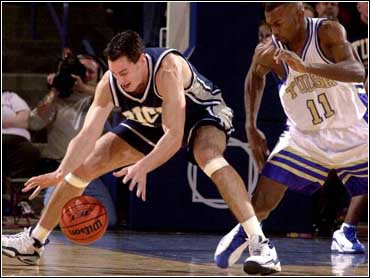 By the time Tulsa's defense finally let up, Rice had more turnovers than points.

Eric Coley scored 18 points and had eight steals as the 13th-ranked Golden Hurricane caused 35 turnovers in a 75-33 win over the Owls on Monday night.

Coley's 263rd career steal, leading to a dunk with 8 1/2 minutes to play, broke Tim Hardaway's conference record for steals. Hardaway, a star guard for the Miami Heat, set the record for Texas El-Paso from 1986-89.

The Hurricane saved their most dominating game of the season for a national television audience.

"Coach told us a lot of people have never seen us play this year, and we want to make a great impact, a good showing, across the country for everybody to see we're not just a fluke or a surprise team in the Top 25," Coley said

Rice, on its longest losing streak since losing 18 straight in the 1975-76 season, scored only two points in the first 7@1/2 minutes. The Owls, playing without three injured starters, shot 27 percent for the game.

Rice's 33 points equals the least allowed by Tulsa since the Golden Hurricane beat the Owls 65-33 in 1997.

"We really guarded today," Tulsa coach Bill Self said. "Our offense wasn't great but our defense was outstanding."