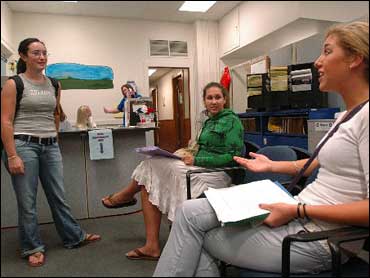 Tulane University canceled its fall semester Friday because of Hurricane Katrina and encouraged its students to take classes through others schools while the New Orleans university tries to clean up from the flooding.

Several schools already have offered to take in displaced Gulf Coast college students; as many as 100,000 in the New Orleans area alone, according to the American Council on Education.

A growing number of Pennsylvania colleges offered Friday to admit students who have been displaced by Hurricane Katrina.

On Friday, ACE announced guidelines for the temporary moves reflecting the financial fears of Gulf Coast schools that don't want to lose their students for good.

The statement released by the higher education group asked that the schools enroll the students as visitors. It also asked that they not charge tuition to students who already paid fall tuition. For those who haven't paid, it said the schools should charge the same tuition as the students' original schools and send those schools the money.

Many colleges already had spelled out in their offers that students would not have to pay extra, though the financial details of the offers have not all been clear.

The federal Department of Education was completing changes to allow students to transfer their student loans to new schools, said Terry Hartle, senior vice president of the Washington-based American Council on Education.

The hurricane has left officials at New Orleans-area colleges struggling to communicate with the outside world.

Tulane used its Web site to post the message late Friday announcing the fall semester had been canceled.

Tulane President Scott Cowen, working from Houston, said the school of 8,000 undergraduates would accept credit from any regionally accredited university and was encouraging students to take courses they would otherwise be taking at Tulane.

Cowen also said the school would work to keep its sports teams together and continuing to represent Tulane by relying on other schools for practice and playing facilities.

"Our student-athletes are an integral part of this plan. We want our athletes to carry the torch, face, and name of Tulane University during this difficult time," he said.

He said colleges and universities in Conference USA and outside the conference have offered to help with practice facilities, playing facilities and general support.

The Green Wave's first game will be Sept. 17 against Mississippi State. It is yet to be determined whether the game, originally scheduled for New Orleans, will be played in Starkville, Miss., or in Tulane's future "home."

Marvalene Hughes, president of Dillard University, a historically black college in New Orleans, said she was planning further discussions with staff Friday night but was exploring a range of options and was not yet prepared to give up on the semester.

"I don't give up that easily," said Hughes, who has been president for just two months and was staying with family in Alabama.

Norman Francis, president of Xavier University in New Orleans, had been located and was safe after being out of touch for several days because of the hurricane, Hartle said.

There was no immediate word from other colleges but Hartle said he expected most schools in New Orleans would be closed until at least January. Officials have said it will be months before the city is functioning again.

A spokesperson with Penn State University says the university has been inundated with calls from students wanting to enroll there and at many of the school's 24 campuses.