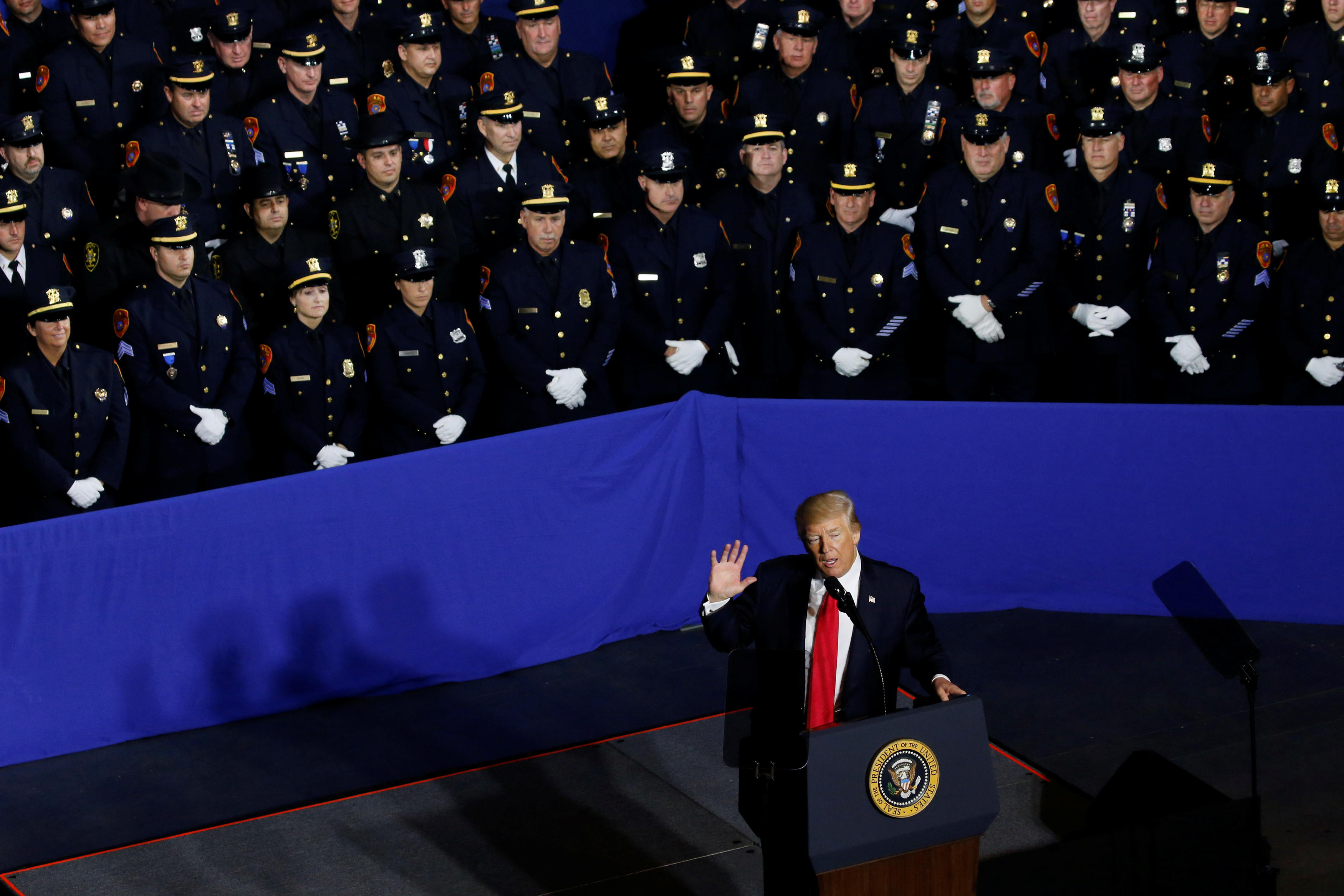 President Trump traveled to Suffolk County Friday to talk about his administration's crackdown on illegal immigration and violent crime, While he's expected to call on Congress to provide more funding for these efforts, this was also the first time Mr. Trump spoke publicly following the failure of the Senate to pass a bill to repeal and replace the nation's health care law, the Affordable Care Act (ACA).

The president vowed to destroy the "vile" cartel MS-13, which he called "particularly violent." He said that these gang members don't like shooting people because "it's too quick and too fast."

"I was reading, one of these animals was caught, and explaining, they like to knife 'em and cut 'em and let them die slowly because that way it's more painful. And they enjoy watching that much more," the president said. "These are animals." And he also pointed out that the gang was responsible for 17 murders in Suffolk County since January.

"When you see these thugs being thrown into the back of a paddy wagon, you just see them thrown in - rough - I said, 'Please don't be too nice.' Like when you guys put someone in the car and you're protecting their head [with your hand],..like don't hit their head, and they've just killed somebody....I said, 'you can take the hand away.'"

Mr. Trump promised again that the wall on the southern border would be built, and said $1.6 billion was approved for the start of construction of the wall. This is half-true -- the House passed a bill with this funding this week, but the Senate has not yet approved the funding.

"We'll build a good wall," he said, adding "We're going to build a real wall," a wall "that works." It would be an additional tool to stop the inflow of drugs into our country, the president explained.

Mr. Trump's speech Friday afternoon took place at Suffolk County Community College in Brentwood, New York, close to where the ultra-violent street gang MS-13 committed a string of gruesome murders, including the massacre of four young men in April in a Central Islip park. He spoke against a backdrop of uniformed police officers and addressed law enforcement officers and family members of crime victims.

The Trump administration Justice and Homeland Security Departments have made targeting the gang a top priority. Mr. Trump's embattled attorney general, Jeff Sessions, has directed federal prosecutors to prioritize the prosecution of these gang members. The administration blames the resurgence of MS-13 in some areas on illegal immigration, and it believes that cracking down on so-called "sanctuary cities" and building a wall on the southern border will eradicate the problem.

Shortly before he left the White House for Long Island Friday, the president tweeted, "We will always ENFORCE our laws, PROTECT our borders, and SUPPORT our police!"

"As you know, I am the big big believer in people in law enforcement, from day one," Mr. Trump said, explaining why he had come to Long Island. Uniformed police officers are standing behind the president as he speaks.

"We love our police, we love our sheriffs, and we love our ICE officers," and they've been working hard, he said.

Of the gang MS-13, the president said, "We're going to destroy the vile criminal cartel MS-13," among others. MS-13 members, he said, are "animals," who "don't like shooting people because it's too quick."

State police from New York and New Jersey, immigration officers, and other federal agency workers were in the audience, Mr. Trump said. He also welcomed some of his political supporters to the speech, including Rep. Chris Collins, whom he praised for being an early supporter of his presidential candidacy. And he thanked Rep. Peter King, who introduced him.

Cities that have "pathetic mayor[s]" or a mayor who "doesn't know what's going on" are seeing less progress, Mr. Trump suggested. He recalled his own upbringing on Long Island, which he noted, did not see violence like that wrought by MS-13. Since Jan. 13, MS-13 members have killed 17 people in this area, Mr. Trump said. MS-13 members "stomp on their victims" and "slash them with machetes."

"They have transformed peaceful parks...into bloodstained killing fields" he said. "They're animals."

We will find you, arrest you, jail you and deport you, Mr. Trump said, addressing MS-13 members directly.

The president called on Congress to provide funding for "hundreds more immigration judges if we're going to dismantle these deadly networks," he told the crowd.

Mr. Trump promised again that the wall on the southern border would be built, and said $1.6 billion was approved for the start of construction of the wall. This is half-true -- the House passed a bill with this funding, but the Senate has not yet passed the spending bill.

It's an additional tool to stop the inflow of drugs into our country, the president said. The previous administration, he claimed, welcomed illegal immigrants into the country, allowing MS-13 to flourish. "It got worse and worse," but he said, "We turned that back."

White House communications director Anthony Scaramucci and chief of staff Reince Priebus both traveled to New York with the president, a day after the New Yorker published a story in which Scaramucci says of Priebus, "Reince is a f******* paranoid schizophrenic, a paranoiac," and made other vulgar comments about Priebus and Steve Bannon