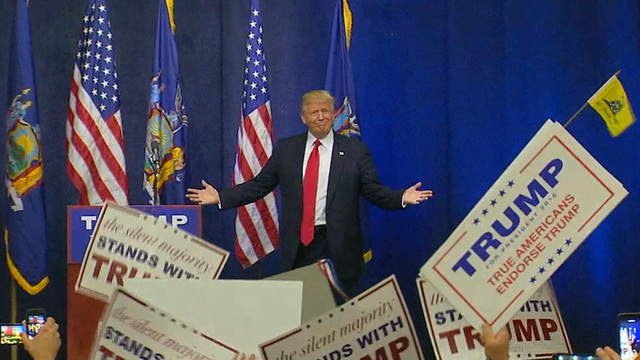 Donald Trump is a presidential candidate who has capitalized on voter anger to turn it into an unexpected groundswell of support - propelling him to being the Republican front-runner for the nomination.

Now, he has a new cause célébre, as his struggles in the delegate selection process in many states have led to stumbles - making the likelihood of a contested convention the highest in decades.

His rallying cry to his supporters: the fix is in.

"We have a rigged system," Trump said to an almost capacity crowd of thousands in at the Times Union Center in Albany, New York. His anger was on full display, as he roared into the microphone about the "corrupt" political system and about the "big, fat, beautiful lie" that he claims is former Secretary of State Hillary Clinton's life.

He was especially incensed after a weekend in which his main rival, Texas Sen. Ted Cruz, walked away with 34 delegates in Colorado, in spite of the state not having a presidential preference vote or caucus.

Cruz was able to use his organizational advantage to great effect, while Trump's team made a number of key blunders at the state convention in Colorado Springs that selected 13 delegates. (21 were previously picked at district conventions.)

Trump's anger has been simmering for weeks, as his campaign has slowly come around to the fact that in this election cycle simply winning states isn't enough. There is a Phase Two: delegate selection. And his election issues have now spread all over the country, with Cruz-friendly delegates outmaneuvering Trump in places like North Dakota, Iowa and Louisiana.

"In Louisiana, I went there and campaigned for four or five days," Trump said. "We had rallies just like this. Thousands and thousands of people. I end up winning Louisiana. And then when everything is done, I find out I get less delegates than this guy that got his ass kicked. Okay? Give me a break."

For many Trump supporters, the delegate selection process is akin to an umpire unfairly calling a foul ball fair in the bottom of the ninth. To those fighting against Trump, it's more like the ball skipping through first baseman Bill Buckner's legs in the 1986 World Series that broke Boston Red Sox fans' hearts: a perfectly fair and unforced error.

Another Trump supporter, Steve Vazci, from Albany, agreed and warned of a hectic Republican convention in Cleveland.

"Delegates are the ones who are going to pick the nominee to this party and this is going to throw chaos for the Republicans, like myself, that are for Trump," Vazci said. "Because the Trump people are going to go crazy. And so will the Cruz people. And somehow they're screwed out of not getting the nomination based on who's got the most delegates. We're in a rough ride in Ohio."

But Trump, attempting to continue portraying himself as the presumptive nominee, spent part of his speech in general election mode, attacking Clinton in his unique style.

"Her whole life has been a big, fat, beautiful lie," Trump said. "It's been a terrible, terrible lie. Everything about her is a lie."

The rally in Albany, one of Trump's largest in weeks, saw the return of the audience pledging to vote for Trump. He debuted the pledge in Florida and it went viral on social media. Some of Trump's detractors, such as the former head of the Anti-Defamation League, Abe Foxman, have likened it to a Nazi salute. Trump has scoffed at the comparison but was aware enough of the visual to ask his crowd to tone it down.

"Should we do the pledge? Right?" Trump said. "Raise your hand. Just raise it a little bit. Don't go too high. Because they make that into something other than Just a little pledge. 'I promise that I, on Tuesday, will vote for Donald Trump and we'll make this country great again.' Go ahead."

Many in the crowd, treating the event as some would a rock concert, dutifully obliged. One supporter was spotted wearing an "LGBT FOR TRUMP" t-shirt.

The latest Wall Street Journal/NBC/Marist University poll has Trump dominating in New York, taking 54 percent of likely Republican primary voters in his home state. If the numbers hold on election night in all of New York's congressional districts, Trump would take all of its 95 delegates. And Trump wants to win, which is why he ended his Albany speech with one of his longest, most animated rants on winning yet.

I love you, Albany! Get out and vote. You will be so happy. I love you. Thank you!"