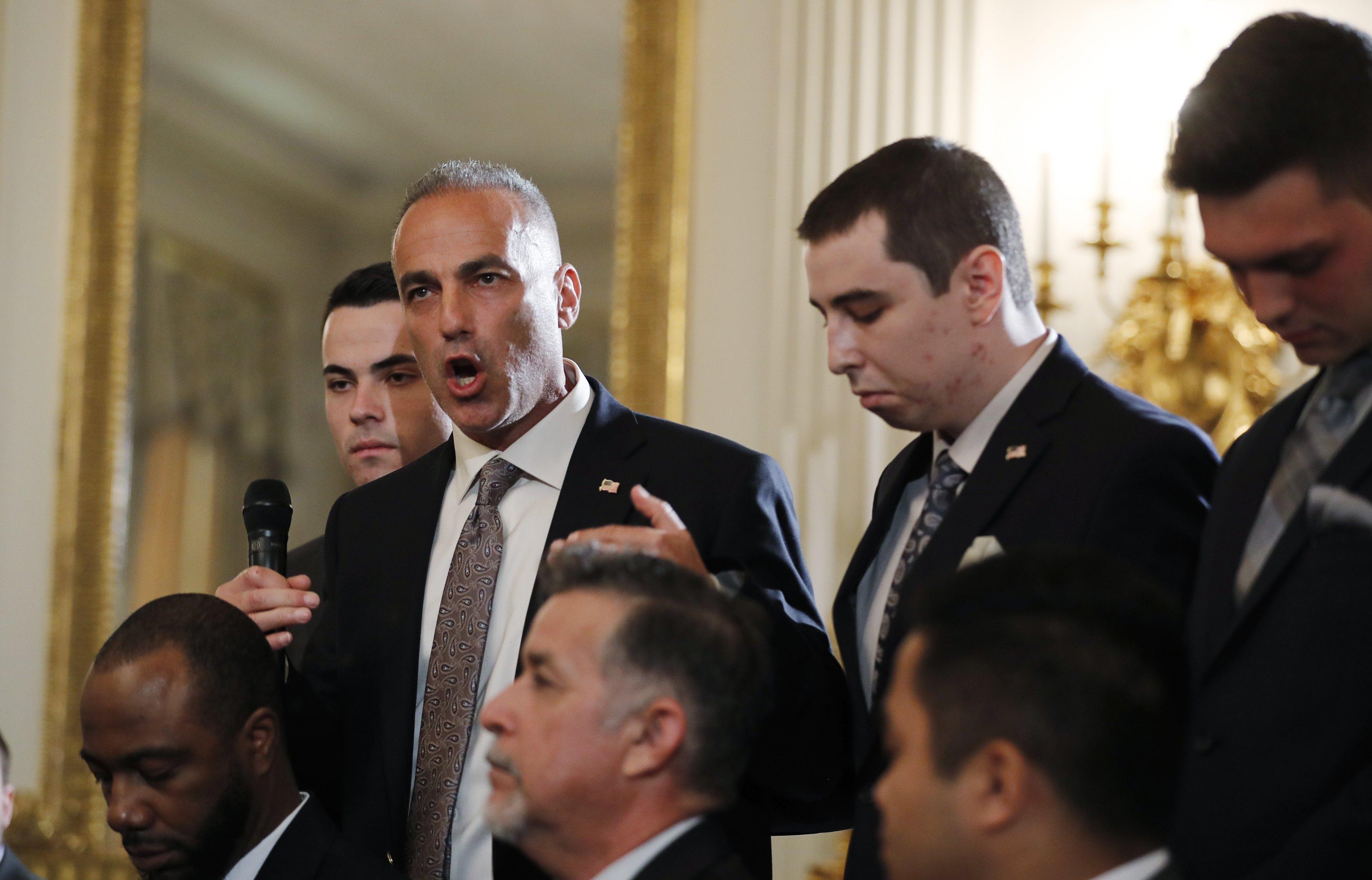 "It should have been one school shooting and we should have fixed it," said Andrew Pollack, who lost his daughter, Meadow Pollack, last week. "I'm pissed. Because my daughter -- I'm not going to see again. She is not here. She is in North Lauderdale, whatever it is, in King David Cemetery. That is where I go to see my kid now."

Hours after the listening session, Mr. Trump tweeted he "will always remember the time I spent today with courageous students, teachers and families."

Mr. Trump, looking at the dozens of students and adults around him, said his administration will look "very strong" at age limits for purchasing guns, although he didn't expand on that idea. The president also suggested arming and providing concealed carry permits for teachers or retired military personnel on campus. The president asked for a show of hands of people who supported and opposed the idea of arming trained adults, such as teachers or janitors, on campus. Some in the room supported the concept, and others opposed.

"Certainly it's controversial, but we'll study that, along with many other ideas," the president said.

Mr. Trump reiterated that his administration is going to push "very strong background checks," and increase a focus on mental health. The president appeared frustrated over a seeming lack of a venue for dealing with people who exhibit warning signs, saying there once were mental institutions.

A note the president held, captured by a Reuters photographer, show multiple points -- "What would you most want me to know about your experience?" "What can we do to help you feel safe?" And "I hear you." Two other points appear to be covered.

Mr. Trump, accompanied by Education Secretary Betsy DeVos and Vice President Mike Pence, asked for ideas. Pence said governors from all 50 states will come to the White House next week to discuss solutions.

"We want to hear your hearts today," Pence told the students around him. "I encourage you to be candidate and be vulnerable, and share with us not only your personal experience, but what it is you would have us to do."

Some of the most vocal students from Parkland who have appeared on TV in recent days, such as David Hogg, were not present Wednesday.

One dad suggested that classrooms have a locked gun in a case so people who work on the campus can be trained and use the weapon if necessary. Another dad said someone who isn't old enough to drink shouldn't be old enough to buy a gun. Yet another dad suggested having a single point of entry in schools, instead of multiple points of entry. A student suggested that all states should be required to conduct active shooter drills, and there are many counties that are required to conduct the drills but do not. Another student suggested there be more counseling available for those who are bullied, as such students, she said, could be more likely to commit violence.

Fighting back tears, Stoneman Douglas student Sam Zeif shared how he feared for his brother, and how he lost a dear friend last week.

"I lost a best friend," said Zeif, who said AR-15 guns should not be for sale. "Was practically a brother. And I'm here to use my voice because I know he can't. And I know he's with me, cheering me on to be strong, but it's hard. And to feel like this, it doesn't even feel like a week. Time has stood still."

"I can't feel comfortable in my country knowing that people have, will have, are ever going to feel like this," he said. "I want to feel safe at school."

Julia Cordover, the student body president of Marjory Stoneman Douglas, said whatever the case, said more must be done.

"It's very scary," Cordover said, her voice wavering. "And knowing that a lot of people did not have this opportunity to be here still is mind-blowing."

Jonathan Blank, another student of that school, said the situation still does not feel real.

"Everything seems fake," Blank said. "I don't even know what's going on. It's just crazy."

"We all need to realize that we all have different points of views, and this solution isn'g going to be a singular thing," Klein said. "It's going to be multi-faceted."

The meeting came as students from nearby schools in Washington, D.C., and Maryland descended on the White House to demand stricter gun control measures in the wake of the high school shooting that left 17 people dead last week. Teens at multiple Florida schools also staged a walk-out Wednesday as a show of support for the students who are meeting with state lawmakers.

Mr. Trump has announced his support for some limited gun measures since then. The president tweeted his support for stronger background checks on Tuesday night, and earlier that day, he announced he has directed Attorney General Jeff Sessions to craft regulations banning devices -- like bump stocks -- that turn legal semi-automatic weapons into illegal automatic weapons. A Quinnipiac University poll released Tuesday found the highest support for stricter gun control measures since the group began its national poll.

The White House offered this list of attendees for the Wednesday session: