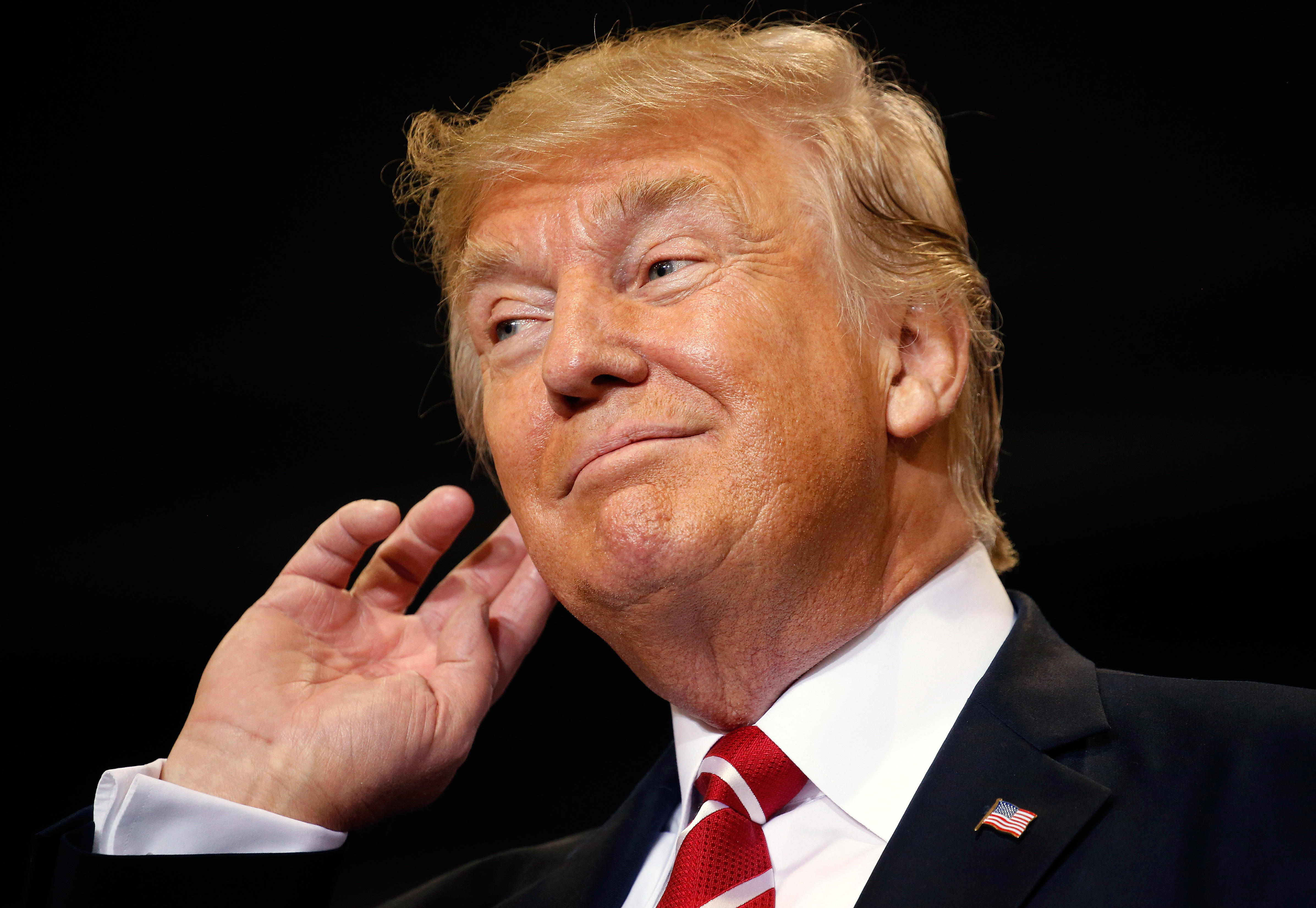 In the span of more than 80 minutes stumping for U.S. Senate candidate Luther Strange, President Trump managed to slam top leaders in his own party, taunt "little rocket man" North Korean leader Kim Jong Un, use a cuss word to describe NFL player Colin Kaepernick and even question if he made a mistake in picking Strange.

Mr. Trump, in a speech that went off script, going from topic to topic, left virtually no stone unturned ahead of Tuesday's Republican primary runoff between Strange and former judge Roy Moore. The president's speech came hours after Sen. John McCain announced he will not vote for the Senate's last-ditch effort to repeal and replace Obamacare before Sept. 30, making any health care reform passage this year less likely. Mr. Trump said passing a health care bill is a "little tougher" without McCain's vote.

"We might have to go back again, and again," the president said, comparing the health care fight to a wrestling match where only the strong continue to rise up and keep swinging.

"You can't quit when you have one or two votes short," he said.

Mr. Trump described his frustration with just how difficult it has been to persuade senators to vote in favor of a health care bill.

"I'm on the phone screaming at people all day long for weeks," Mr. Trump said.

Strange's no-strings attached agreement to vote for the health care legislation that failed this summer, the president told his wife, First Lady Melania Trump, was the coolest thing that happened to him all year.

Mr. Trump said he endorsed Strange — whom he praised highly — out of loyalty. Strange is technically an incumbent, having been appointed to the Senate earlier this year to replace now-Attorney General Jeff Sessions.

"And I might've made a mistake, I'll be honest," the president said.

But the president touched on a number of other issues, deriding "little rocket man" North Korean leader Kim Jong Un, after the two traded barbs this week during the United Nations General Assembly. Mr. Trump on Friday said he would handle North Korea, but he also left the uncertain situation of its nuclear weapons capabilities up in the air, saying,"maybe something gets worked out, and maybe it doesn't."

The president also brought up one of his favorite topics to criticize — the "hoax" of Russian meddling in the 2016 presidential election. Russia, "did not help me," the president said.

"By the way folks, just in case you're curious, no Russia did not help me," the president said, asking jokingly if there were any Russians in the audience.

The president also made some remarks that had little to do with U.S. policy, using a swear word to describe NFL star Colin Kaepernick, who became a controversial figure for refusing to stand for the national anthem. Trump said anyone who disrespects the flag should be fired.

Mr. Trump said that, whoever wins the primary Tuesday, he will return to Alabama to campaign for the victorious Republican ahead of the general election.

Mr. Trump has strongly endorsed Strange on Twitter in recent days, even though many high-profile, hard-right supporters of the president are backing Moore, an ultra-conservative former chief justice of Alabama's Supreme Court. Mr. Trump will be campaigning for Strange on Monday in Alabama.

But it's unclear how much Mr. Trump's endorsement — despite his claims that it's giving Strange a big boost — matters, as it divides the Republican base. Ahead of Tuesday's primary, it's Moore who leads in the polls. Real Clear Politics' polling average gives Moore a six-point advantage over Strange, though it should be noted that it's very difficult to accurately poll a special election in Alabama. Moore led Strange in the initial round of voting for the Republican primary, but not by enough to avoid a runoff.

Mr. Trump stepped away from the mic, after speaking for an hour and 23 minutes.

The Trump administration expected to roll out its tax plan next week. Mr. Trump said the tax rates will be among the lowest in the world. Mr. Trump joked that he would get off the stage if Strange didn't promise to vote for the future tax reform legislation.

Trump said he won't blame civil service, or the unions, for terrible conditions at Veterans Affairs. But now, he said, things are much better.

As investigations about Russian election meddling and any ties to the Trump campaign ramp up, calling the idea that Russia influenced the election a "hoax."

"Are there any Russians in the audience?" Mr. Trump said, adding that he didn't see many.

Mr. Trump said he won the election because the Electoral College is "very special." The president talked about the states he won other than Alabama, including Pennsylvania and Florida.

8:52 p.m.: Trump says thousands of people are waiting outside

Mr. Trump said thousands of people are waiting outside to get into the venue, which reporters there disputed.

8:44 p.m. Trump says he "might've made a mistake" endorsing Strange

Mr. Trump, saying he endorsed Strange out of loyalty, said, "And I might've made a mistake. I'll be honest."

Mr. Trump reassured his voters that the infamous border wall with Mexico will be built, and it will be "pristine" and "perfect." The designs are coming along well, he said. The wall has to be see-through, though, so 100-pound bags of drugs don't hit people in the head, he said.

President Trump invited his chief of staff – and the former Department of Homeland Security secretary — on stage, commenting on his "four stars" as a general.

"No games. He just wants to work," Mr. Trump said when Kelly was reluctant to take the stage.

Mr. Trump said Moore "has a very good chance about not winning" in the general election, and Strange would win "easily." But Mr. Trump also said he would return to campaign for the Republican nominee, no matter who that is. Mr. Trump said they're "both good men."

President Trump said the media coverage of the night's event, and of the race, will be skewed. He criticized the media, saying it wouldn't show the crowd size, and would criticize him if Strange doesn't win on Tuesday. He called the media some of the most "dishonest" people he has ever met, adding that they're really "bad people."

The president expressed his frustration about how difficult it is to get people to support him on health care, saying he's had to be "screaming at people all day long" to get their support in the past.

Mr. Trump also expressed frustration over McCain's deciding "no" vote on an earlier attempt to repeal and replace Obamacare over the summer.

"He decided to do something different and that's fine," Mr. Trump said

8:15 p.m.: Trump says "little rocket man" should have been handled a long time ago

Mr. Trump, who has derided Kim all week, said he will still handle the problem of North Korea's nuclear weapons program. But then, he said he wasn't sure what will happen with North Korea.

"Maybe something gets worked out and maybe it doesn't," Mr. Trump said. Personally, I'm not sure."

Before launching too far into his speech, Mr. Trump offered his condolences to the people of Texas, Florida, Puerto Rico and elsewhere after Hurricane Irma and Hurricane Harvey "ravaged" their regions.

"When one part of America hurts, we all hurt," Mr. Trump said.

"Thank you very much, wow," Mr. Trump said in his first words on stage.

"I love this place," he says, saying he set "every record" in Alabama, referencing his 2016 election.

"We love Jeff Sessions," the president said, after he has ridiculed his attorney general on social media.

Mr. Trump said the crowd will be "impressed" with what they do in Washington.

Strange says Mr. Trump needs votes from people in the crowd to elect him and have the ability to "stand up" to Mitch McConnell, John McCain and others.

Strange took the stage, stopping briefly to place a "Make America Great Again" hat on his head. Strange said he is honored Mr. Trump, who he considers "my friend," would come to Huntsville for him. Strange launched into issues like jobs and immigration reform.

"Let's talk about fixing our immigration system. I love that build the wall chant," Strange said.

Mr. Trump disembarks from Air Force One, headed for the Von Braun Center in Huntsville.

President Trump tweets on his way to Alabama, where he expects a "big rally."