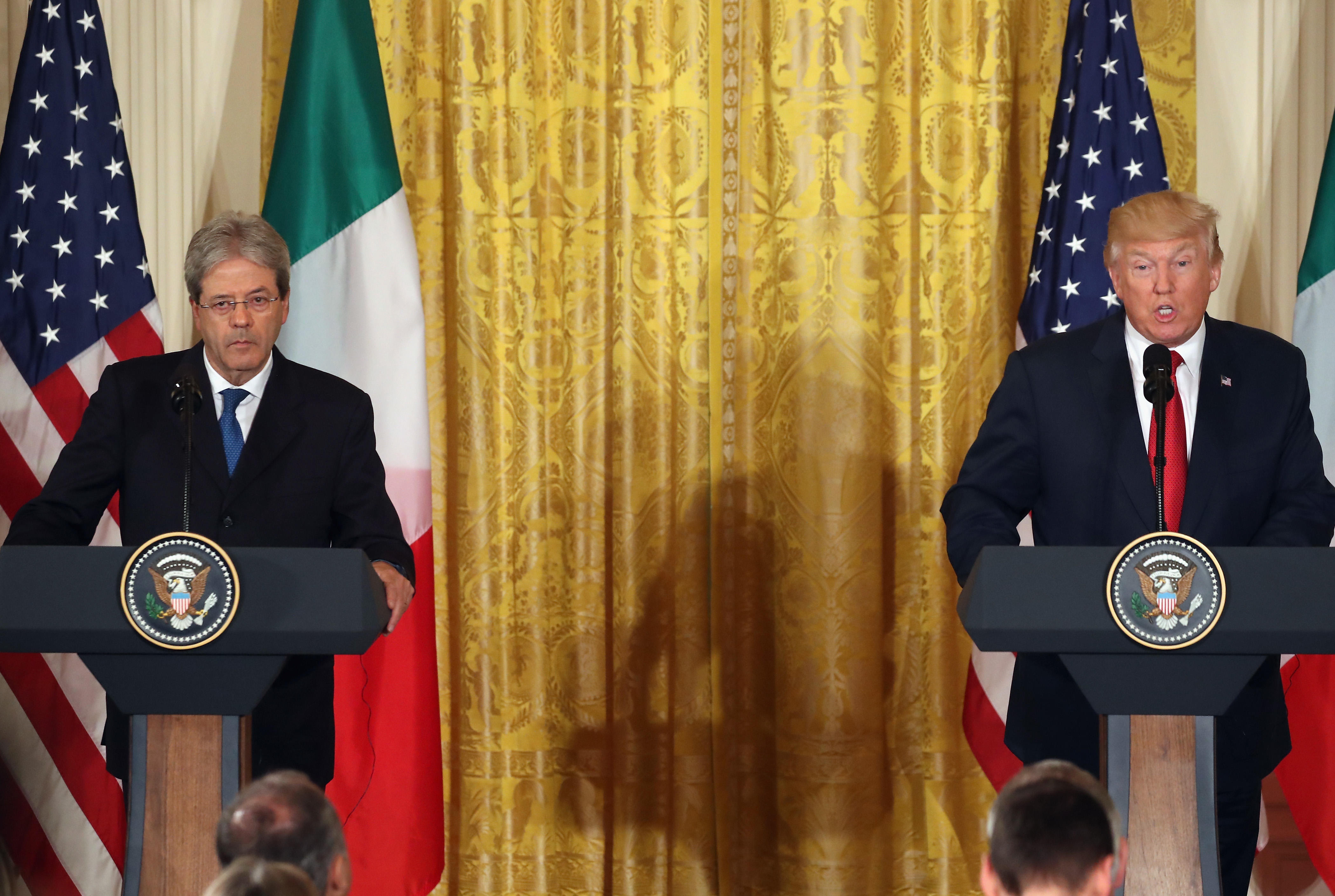 President Donald Trump said Thursday he’s hoping for congressional votes on “both” health care reform and a spending bill to avoid a government shutdown next week.

“I want to get both,” the president said at a joint press conference with Italian Prime Minister Paolo Gentiloni, though Mr. Trump added a caveat, that health care will happen soon, if not next week.

“I think we want to keep the government open, don’t you agree?” Mr. Trump said. “I think we’ll get both.”

Mr. Trump held the press conference after his first meeting with Gentiloni at the White House. The visit comes before next month’s upcoming Group of Seven summit (G-7) in Italy, where the leaders of the U.S., Italy, German, Canada, France, Japan and Britain will discuss the economy and, likely, national and global security issues. The G-7 nations have attempted to pressure Russia to put an end to Syria’s civil war.

Mr. Trump said that the U.S. is “in good shape,” in reference to North Korea, citing progress made in the last few hours. It’s not clear exactly what he was referring to here. The president also said that Chinese President Xi Jinping is working hard on the matter.

President Trump criticized Iran for not living up to the spirit of the nuclear accord. He said his administration is analyzing it and promised that he’d have more to say about it soon. Secretary of State Rex Tillerson said Wednesday that the nuclear deal is just “buying off” Iran temporarily. And also a little at odds with the president’s statement, Tillerson told Speaker of the House Paul Ryan in a recent letter that Iran is complying with the Obama-era agreement to freeze its nuclear program in exchange for sanctions relief, though the regime remains a leading state sponsor of terror.

The president said there is one country in which the U.S. will not intervene — Libya. After suggesting the U.S. should bomb ISIS In Libya on the campaign trail, Mr. Trump at Thursday’s press conference said he doesn’t see a role for the U.S. in stabilizing Libya.

Mr. Trump thanked the prime minister for Italy’s role in the “anti-ISIS campaign.”

“All nations must condemn this barbaric enemy,” and work towards its “total and complete destruction,” Mr. Trump said.

Like the president, Gentiloni is also new to his office, taking the post in December. Before that, he was Italy’s foreign minister.

Asked about the shooting in Paris, which he said he heard about just before the news conference, Mr. Trump offered his condolences to France and said that it “looks like another terrorist attack.”

“What can you say? It just never ends,” Mr. Trump added. “We have to be strong and we have to be vigilant.”

Follow the live blog below for updates from earlier.

4:21 p.m. President Donald Trump said he doesn’t see a role for the U.S. in Libya, saying the U.S. has “enough roles” right now.

Trump on passing a health care bill and avoiding a government shutdown: “I want to get both”

4:16 p.m. Mr. Trump, asked if he thinks he will accomplish avoiding a government shutdown or passing health care legislation next week before his first 100 days ends, said he, “I want to get both” -- hopefully next week, but if not, soon.

“I think we want to keep the government open, don’t you agree? I think we’ll get both,” Mr. Trump said.

4:15 p.m. Trump said a strong Europe is important to him, adding that he’s very excited to meet Pope Francis soon.

4:14 p.m. Gentiloni said Italy isn’t involved in the military operations in Syria other than marginal aspects, and it isn’t Italy’s plan to change that.

4:08 p.m. Mr. Trump offered his “condolences” to France, and he said it “looks like another terrorist attack.”

4:01 p.m. Gentiloni, speaking in Italian through a translator, said Italy is “very proud” that so many Italians live in the U.S., and so many U.S. students study abroad in Italy.

The prime minister said his country is “very active” in Iraq and Afghanistan, and that the stabilization work in those countries will be decisive. Gentiloni said he told Mr. Trump that, although this is a difficult moment, he has “confidence” in the European Union and the relationship between the U.S. and Italy.

“We are going through a difficult time, but I have confidence that the European Union will continue to be a positive response to this,” he said.

Gentiloni said he trusts the G7 summit will show how unified those nations are.

3:58 p.m. Mr. Trump thanks the prime minister for his role in the “anti-ISIS campaign.

“All nations must condemn this barbaric enemy,” and work towards its “total and complete destruction,” Mr. Trump said.

Trump emphasized the “reciprocal” role of the U.S.-Italy relationship in trade and defense.