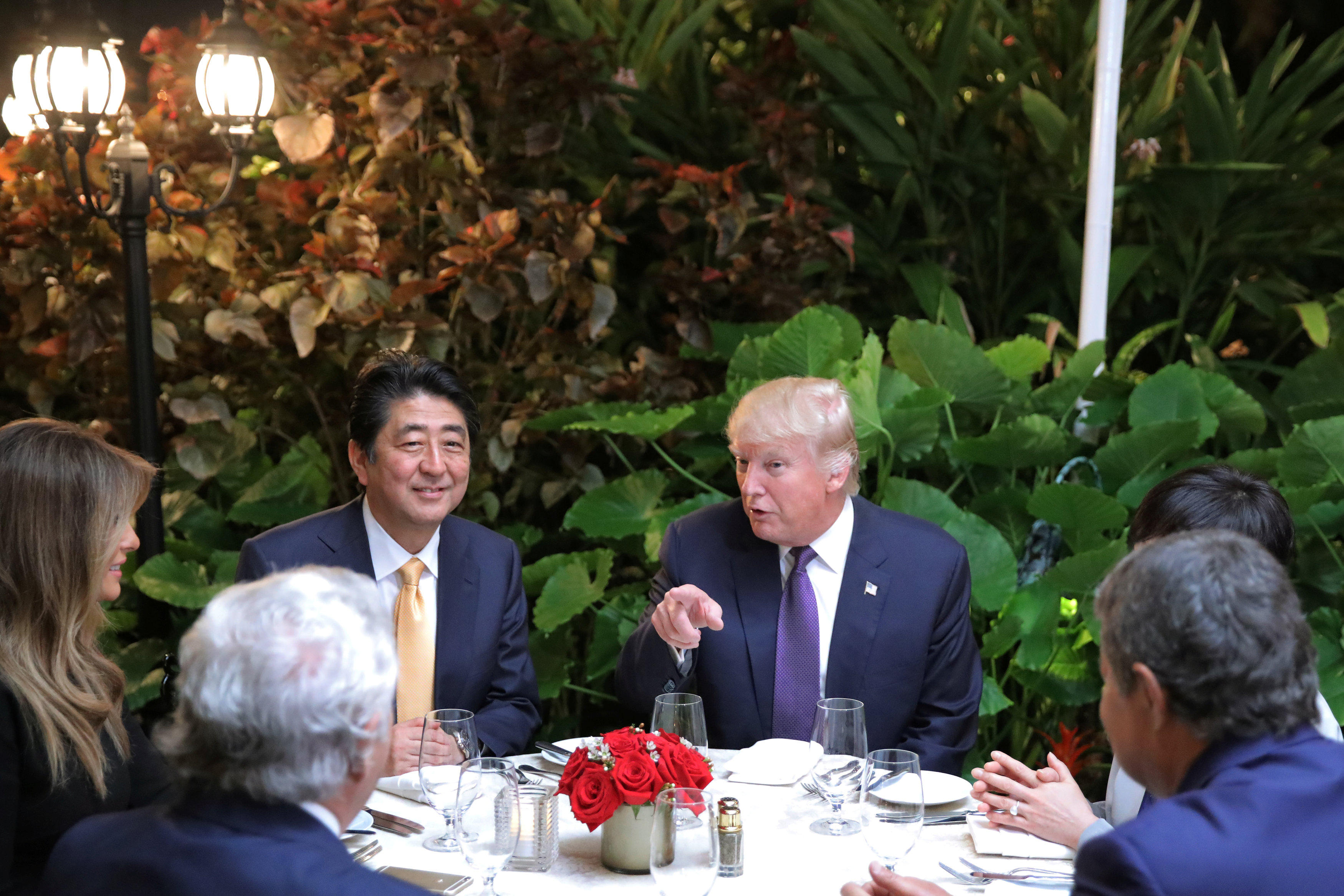 JUPITER, Florida -- President Donald Trump has long boasted about his prowess on the golf course. Now he’s putting his game to work.

The president spent his Saturday morning golfing with Japanese Prime Minister Shinzo Abe as he hosts his first foreign leader at his winter estate in Palm Beach, Florida.

After a rocky diplomatic start that included contentious phone calls with the leaders of Mexico and Australia, the friendly weekend of meetings, dinners and golf suggests the new president is willing to invest time in developing close personal relationships with leaders he feels he can work with.

Mr. Trump and Abe left Mar-a-Lago early Saturday morning and headed north to one of Mr. Trump’s golf courses in Jupiter, Florida. Reporters weren’t able to catch a glimpse of the pair as they played on the 285-acre property.

But Trump later posted a photo of the two reportedly giving each other a high-five on the golf course and tweeted, “Having a great time hosting Prime Minister Shinzo Abe in the United States!”

The Trump National Golf Club website, in typical Trumpian language, claims the course “features the finest revetted bunkers in the United States, incredible water hazards, including a magnificent island green, and one of the most picturesque landscapes, all of which make for a truly memorable round.”

Abe had joked at a joint press conference at the White House on Friday that he was looking forward to playing golf with Trump, even though he’s not nearly as good with a club.

“My scores in golf is not up to the level of Donald at all,” Abe had said. “But my policy is never up, never in, always aiming for the cup -- never cut to just the goal with shortcuts and short chops.  Those are the words never found in my dictionary.”

He said he planned to use the time to discuss the future of the world, the Pacific region and U.S.-Japanese relations.

As their husbands golfed, Melania Trump and Akie Abe toured the Morikami Museum and Japanese Gardens in nearby Delray Beach.

The two couples touched down in Florida on Friday afternoon and headed straight to Trump’s Mar-a-Lago Club, where they enjoyed a late dinner at its crowded patio restaurant. They were joined by Robert Kraft, the owner of the Super Bowl champion New England Patriots, and several interpreters. Paying members and club guests took in the scene and mingled with Trump and Abe into the night.

The president and Mrs. Trump planned to host a more formal delegation dinner with the Abes on Saturday night.

Mr. Trump and Abe appear to have hit it off early. Abe was the only world leader to meet with Trump before his inauguration. Ivanka Trump, the president’s eldest daughter, also sat in on that meeting with Abe at Trump Tower.

As a candidate, Trump often railed against former President Barack Obama for his frequent golfing, claiming Obama played more often than players on the PGA Tour.

He said if he won he’d likely be too busy to golf and would only play with people he was looking to make deals with.

One of Trump’s first actions as president was to withdraw the U.S. from a 12-nation, trans-Pacific trade agreement that was negotiated by the Obama administration and strongly supported by Tokyo.

Abe has said that Japan may be open to a bilateral trade deal with the U.S., but reaching such a deal would be political difficult. Japan logged the second largest trade surplus with the U.S. last year.

In the press conference Friday, Abe briefly addressed the issue of TPP, saying officials from both countries are working to “create a new framework for dialogue” over trade.

“I am quite optimistic that the good results will be seen from the dialogue,” Abe said.