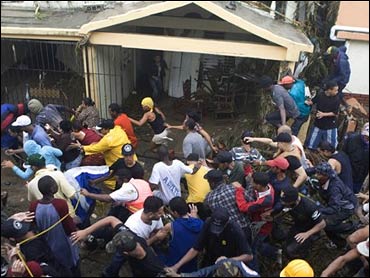 The vast majority were killed in the central Dominican province of Santiago after officials, fearing a collapse of a dam, ordered the release of billions of gallons of water into the Yaque River and inundated seven towns along the waterway's path.

"We knew the damage we were going to cause below. We did not want to, but we had to," Octavio Rodriguez, a member of the committee that decided to open the floodgates, told The Associated Press.

People complained on local radio that they were not warned of the water release from the dam, and officials acknowledged it might have caused some of the deaths.

"We have an emergency situation. It's a catastrophe," Gov. Jose Izquierdo said.

The storm was also blamed for two deaths in northern Haiti and one in Puerto Rico.

Dominican Attorney General Radhames Jimenez said at least seven people were killed and 5,000 evacuated. The storm was also blamed for one death in Puerto Rico, where a rain-triggered avalanche buried an SUV.

Families living along the banks of the swollen Yuna River near Santiago were evacuating, placing mattresses atop their heads, and climbing aboard motorcycles headed toward higher ground. Televisions and small ovens were stacked outside humble wooden homes, ready to be moved. Trucks carrying soldiers headed toward Santiago province.

As heavy rains began to overwhelm the Tavera Dam, outside Santiago, the country's second-largest city, officials gave the order to begin releasing millions of gallons per second into the river, said Ismael Matias, planning chief of the Dominican emergency operations center.

Local authorities had warned repeatedly that a release was possible during the storm and told people to evacuate areas in the path of floodwaters rising as high as 66 feet above normal, Matias said. It was unclear if the warnings were heeded or even relayed.

"Perhaps some people did not believe that the water was going to come and they stayed, that's possible," Matias told The Associated Press.

Olga struck nearly two weeks after the official end of the Atlantic hurricane season. It is only the 10th named storm to develop in the month of December since record keeping began in 1851, according to the U.S. National Hurricane Center in Miami.

"It's not completely unusual to have a storm form in December," said Daniel Brown, a hurricane specialist at the center, who noted that three named storms have formed after Nov. 30 since 2003.

At 10 a.m. EST, Olga was centered about 75 miles south of Guantanamo, Cuba, and moving west at about 23 mph. It had maximum sustained winds of about 40 mph, the hurricane center said.

Forecasters predicted it would gradually weaken into a tropical depression.

The storm passed through the southwestern areas of the Dominican Republic that were hardest hit by Tropical Storm Noel six weeks ago. At least 87 deaths in the country were blamed on Noel, the deadliest storm of the 2007 Atlantic hurricane season.

The storm passed Puerto Rico on Tuesday night, knocking out electricity to 79,000 people and water to 144,000.

A tropical storm warning was in effect for the southeastern Bahamas and the Turks and Caicos Islands, meaning tropical storm conditions are expected there within 24 hours.

Olga will be included in the tally for the 2007 hurricane season, bringing the number of named storms to 15, including six hurricanes. The next season begins June 1.