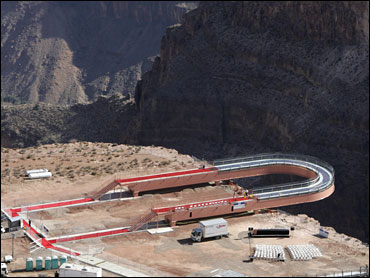 Indian leaders and a former astronaut stepped gingerly beyond the Grand Canyon's rim Tuesday, staring through the glass floor and into the 4,000-foot chasm below during the opening ceremony for a new observation deck.

A few members of the Hualapai Indian Tribe, which allowed the Grand Canyon Skywalk to be built, hopped up and down on the horseshoe-shaped structure. At its edge — 70 feet beyond the rim — the group peeked over the glass wall.

"You are out there in the air and looking down and nothing below you but glass and you are thinking, 'please don't jump on this,'" Hualapai Indian Tribe member Don Havetone told CBS News correspondent John Blackstone.

The Hualapai, whose reservation is about 90 miles west of Grand Canyon National Park, allowed Las Vegas developer David Jin to build the $30 million Skywalk in hopes of creating a unique attraction on their side of the canyon.

"To me, I believe this is going to help us. We don't get any help from the outside, so, why not?" said Dallas Quasula Sr., 74, a tribal elder who was at the Skywalk. "This is going to be our bread and butter."

For $25 plus other fees, up to 120 people at a time will be able to look down to the canyon floor 4,000 feet below, a vantage point more than twice as high as the world's tallest buildings.

The Skywalk is scheduled to open to the public March 28.

To reach the transparent deck, tourists must drive on twisty, unpaved roads through rugged terrain. But the tribe hopes it becomes the centerpiece of a budding tourism industry that includes helicopter tours, river rafting, a cowboy town and a museum of Indian replica homes.

Robert Bravo Jr., operations manager of the Hualapai tourist attractions called Grand Canyon West, said he hopes the Skywalk will double tourist traffic to the reservation this year, from about 300,000 visitors to about 600,000. In later years, he hopes it brings in about 1 million tourists.

"It's a great feeling today. Once everybody sees this, and it's televised, they're going to know to come here," Bravo said.

Architect Mark Johnson said the Skywalk can support the weight of a few hundred people and will withstand wind up to 100 mph. The observation deck has a 3-inch-thick glass bottom and has been equipped with shock absorbers to keep it from bouncing like a diving board as people walk on it.

The Skywalk has sparked debate on and off the reservation. Many Hualapai worry about disturbing nearby burial sites, and environmentalists have blamed the tribe for transforming the majestic canyon into a tourist trap.

Hualapai leaders say they weighed those concerns for years before agreeing to build the Skywalk. With a third of the tribe's 2,200 members living in poverty, the tribal government decided it needs the tourism dollars.

Las Vegas businessman David Jin fronted the money to build the Skywalk. According to the tribe, Jin will give it to the Hualapai in exchange for a cut of the profits.

Construction crews spent two years building the walkway. They drilled steel anchors 46 feet into the limestone rim to hold the deck in place. Earlier this month, they welded the Skywalk to the anchors after pushing it past the edge using four tractor trailers and an elaborate system of pulleys.