Mark Strassmann is a CBS News correspondent stationed in Iraq. 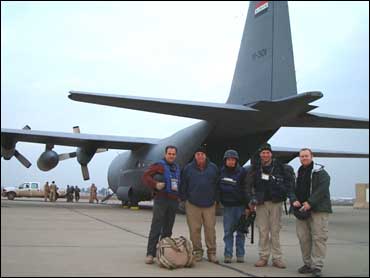 (CBS)
Business travelers griping about flight delays should try getting around Iraq.

To get around this country as an American civilian, you often have to improvise. Travel here is a nightmare. Driving any distance is still too risky. Commercial aviation is non-existent. So any chance at flying means asking the U.S. military for an open seat on one of their helicopters, usually a cramped, noisy Blackhawk. Often you're grateful to wedge into a middle seat.

Over the weekend, we were stuck at a military airstrip in Mosul, in northern Iraq. That's not a good situation for anyone with someplace to go. Our trip up to Mosul from Baghdad had involved three separate Blackhawks, 11 hours of travel, and a good bit of luck just to make it that far, that fast.

Everything about our chances of returning to Baghdad looked grim. Our four-man CBS News team of travelers was way low on the military's waiting list to fly. Not that it mattered. Storm clouds had moved in, so nothing was moving out. And in Iraq, bad weather can mean delays of days, not hours.

Most of the other glum-faced passengers, mostly U.S. soldiers and contractors, filed inside the makeshift terminal. Some of them began long naps. Why not?

But outside, sitting on the otherwise empty tarmac was a C-130, a military cargo plane. This one belonged to the Iraqi Air Force, and was carrying some of the Prime Minister's staff. And standing just off the tarmac, smoking and scheming between long drags of his Marlboro Lights, was Larry Doyle. No one else knew it. But a genius idea was hatching.

Larry is the CBS News bureau chief in Baghdad. For the last 35 years, he's globe-trotted after stories. (At last count, he's visited 123 countries. If it's some place you've heard of, Larry has the stamp in one of his passports.) He has made a career of beating improbable odds, and somehow getting CBS News on television from far-flung outposts to war zones.

Larry spotted and flagged down the U.S. Air Force colonel training the Iraqi crew. The American officer agreed to run the idea by the Iraqis. Got any extra seats for some stranded, reasonably well-behaved Americans? Turns out, they would be "honored to have us as their guests" on board.

Last time we checked, those Blackhawks were still nowhere in the skies of Mosul.