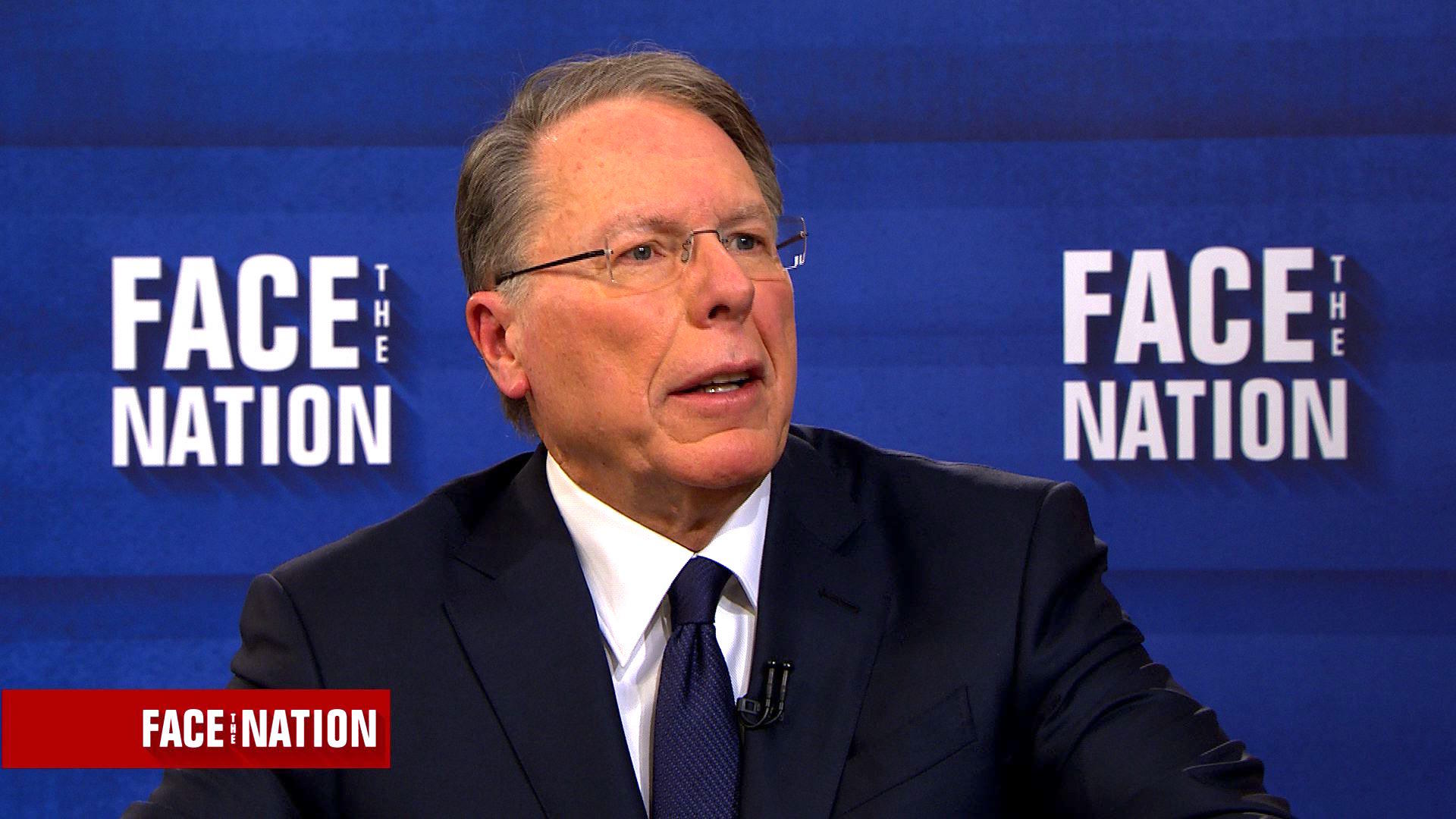 What follows is a transcript of the interview, which aired Sunday, Oct. 8, 2017, on "Face the Nation."

JOHN DICKERSON: Joining us now is the executive vice-president and CEO of the National Rifle Association, Wayne LaPierre. Welcome.

WAYNE LAPIERRE: You know, can I say first that this has been a tragic week. I mean, we had N.R.A. members out there in the middle of that tragedy. We had N.R.A. families. We had families wounded out there. It's just been horrible. But to the people that are trying to politicize this tragedy, I would say this. There are monsters like this monster out there every day.

JOHN DICKERSON: But is it really an elite position for a person to think if there is evil in the world perhaps there should be something that makes it a little harder for the evil person to get their hand on something that can fire bullets with such rapidity and then bump fire stocks, which it make available to fire even faster? That's not elite. That's just somebody trying to figure out how to have less people be dead.

WAYNE LAPIERRE: Well, I do think this. I mean, if we could legislate morality, we would have done it long ago. I mean, as we talked before, Paris wouldn't have happened. They outlaw fully automatic guns. Brussels. San Bernardino. California has every gun law under the sun. It still happens. I mean, the bad people could care. But on bump stocks let me say this.

The fact is that the Obama administration a couple years ago legalized a device, their A.T.F., that fuzzed the line between semiautomatics and fully automatics. And if we're able to fuzz that line, all semiautomatics are at risk. I've been arguing with Dianne Feinstein for years. She's been trying to ban semiautos, saying a semiauto's a semiauto. It's not an assault weapon like you say, Dianne Feinstein. And it's not a machine gun.

JOHN DICKERSON: But in--

WAYNE LAPIERRE: If you fuzz the line, they're all at risk. And we're not going to let that happen.

JOHN DICKERSON: Well, let's not fuzz the line. She says this specific piece of legislation just bans bump fire stocks. So does the N.R.A. support that or no?

WAYNE LAPIERRE: It's illegal to convert a semiautomatic to a fully automatic. A.T.F. needs to do its job. They need to look at this and do its job.

JOHN DICKERSON: Her argument is and the A.T.F.'s is they can't rule on this. It's out of their purview. That it has to be done in legislation. So is the N.R.A. position it can be done through legislation or you oppose it? Where are you on this?

WAYNE LAPIERRE: No, we think A.T.F. ought to do its job, look at this, and draw a bright line.

JOHN DICKERSON: If I'm a Republican and I'm a fan of the N.R.A., do I want to say no or yes to legislation that does this?

WAYNE LAPIERRE: I think you want to tell A.T.F. to do its job. It's an interpretive issue, and they need to get the job done. But not let Dianne Feinstein, which is what she wants to do, turn this all into some Christmas tree on the hill where she brings all her anti-gun--

WAYNE LAPIERRE: --circus she's been trying to do for years into this.

JOHN DICKERSON: Here is the problem people have with the N.R.A., is they hear you say that. And basically they say, "What Mr. LaPierre is trying to do is tell any gun owner that any measure to regulate guns of any kind is really an effort to take their guns away." Therefore they should be fearful, that you're basically trying to scare them.

WAYNE LAPIERRE: We have all kinds of gun laws on the books right now, John. We don't enforce any of them. If somebody wanted to do something about Chicago, enforce the federal gun laws right now. If a felon touches a gun, five years in prison. Drug dealer, 10 to 20. Criminal gang member, 10 to 20. I mean, Dianne Feinstein, universal checks she's been talking about this last week. There is not a gang member in Chicago that's going, "Hey, I'm going to get you. But first I have to go through Dianne Feinstein's background check."

JOHN DICKERSON: Let me ask you this.

JOHN DICKERSON: Stepping back, is the N.R.A. position that you're okay with the current restrictions against fully automatic?

JOHN DICKERSON: But to be fair to Senator Feinstein, she didn't fuzz the line in the conversation we just had.

She, was actually, perhaps because over the years you have come out on the winning end of these arguments, said that this only deals with this one specific bump fire stock. So in this case the line is not being fuzzed.

WAYNE LAPIERRE: Well, I mean, the fact is the bump stock does fuzz the line though. And that's why A.T.F. needs to do its job. But we really need to get back. I mean, if we're going to do something, let's do something meaningful. I mean, the outrage they're trying to stir against the N.R.A. they ought to be stirring against the mental health system, which has completely collapsed.

All the police officers know it. They're back on the streets. We've dumped it on the police officers. We ought to enforce the federal gun laws and do something about our criminal justice system, which is catch and release. Places like D.C. are second-chance cities. Well, the second chance is taken out against the good guys.

JOHN DICKERSON: Have you talked to President Trump about any of this?

WAYNE LAPIERRE: You know, I have not. I think some people in NRA have talked to the administration, but we have let him know where we stand. But it comes down to at 2:00 a.m. if your glass breaks in the middle of the night, there's not a government authority on the planet that substitutes for your right to own a firearm. People want to be able to protect themselves when they cross a state line. That's why we're fighting for reciprocity. It's about the good guys protecting themselves.

JOHN DICKERSON: Let me ask you about reciprocity. Federalism suggests the states should make their laws. 32 states I think have said they don't want reciprocity. Why should the federal government come in and tell the states what to do?

WAYNE LAPIERRE: Well, 42 states now have good carry laws. And the fact is I don't think those states have a problem with their folks protecting themselves when they cross a state line. Nobody should be forced to face evil with empty hands. And the fact is we don't want the honest people crossing a state line, somebody that ought to be in jail inflicting evil on them, and then the honest person going, "Oh no. Not me." That's their last words.

JOHN DICKERSON: People from the other side see this, and they say, "Why is it so easy to get very lethal weapons?" Is that just the price of freedom in your view?

JOHN DICKERSON: But in this case, no good guys with a gun, I mean, you had members of the band saying if they pulled out their weapons they worried they'd get shot.

WAYNE LAPIERRE: Well, I'll tell you. In Las Vegas the first thing I heard people say when they sheltered in place is somebody said, "Hey, do you want a gun?" I mean, "Does anybody have a gun?"

JOHN DICKERSON: So is your view it would have helped in Las Vegas?

JOHN DICKERSON: All right. We're out of time. Thanks so much, Mr. LaPierre.

WAYNE LAPIERRE: Thanks, John. Thanks for having me.

Kinzinger says "a lot of people" to blame for missteps in Afghan withdrawal
View CBS News In
CBS News App Open
Chrome Safari Continue
Be the first to know
Get browser notifications for breaking news, live events, and exclusive reporting.