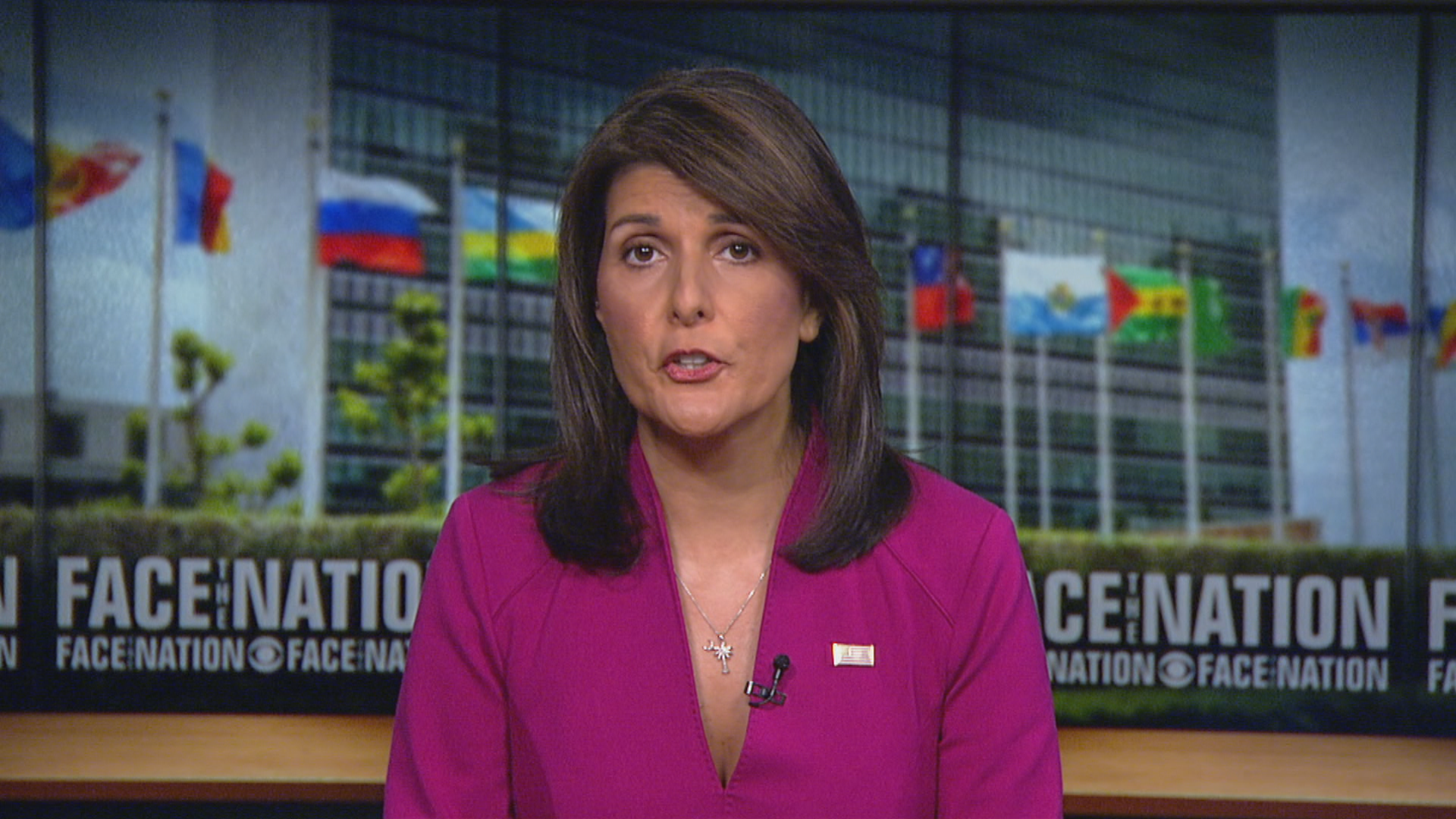 The following is a transcript of the interview with U.S. Ambassador to the United Nations Nikki Haley that aired Sunday, Sept. 23, 2018, on "Face the Nation."

JOHN DICKERSON: Good morning and welcome to "Face the Nation." We begin with the U.S. ambassador to the United Nations, Nikki Haley, who is in New York this morning. Good morning, Madam Ambassador. I want to start with a topic that is not on your to do list next week but I want to get your thoughts. Brett Kavanaugh the president's nominee has been accused by Christine Blasey Ford who has now decided to come and speak to the Senate Judiciary Committee. When you and I spoke last on this show, you spoke about accusers and that you were proud that they had come forward and they should be listened to. But you also have been a politician in public life and you know what it's like to get accused of something that isn't so. Knowing those two things how- help us sort through how this should be discussed in a public forum.

UN AMBASSADOR NIKKI HALEY: Well good morning John. First of all I think it's very important that accuser- that accusers are heard and that their story is heard. But I also think the accused needs to be heard. This is a situation where the Senate really needs to lead on this in the way that they are responsible, in a way that they are conscious of hearing both stories, and they do it quickly for the sake of both families and they take the politics out of it. We see way too much politics in this. And I think at the end of the day the goal is the truth. And you do that in a way that's not with a lot of fanfare. You do it in a way that's with a lot of respect. And I think that's what everybody- and I think that's what the American public wants to see.

JOHN DICKERSON: All right. Ambassador Haley, now onto the business of next week on the question of Iran. I spoke with the British prime minister on Friday who said the deal is working, that the U.S. has removed itself from, and that the UK and the rest of the signatories are going to still do business with Iran. Does that mean they will face sanctions from the United States?

AMB. HALEY: Well I- you know they have a decision to make. Our decision was that, you know, hundreds of billions of dollars was going into Iran and in return they were having ballistic missile testing. They were selling arms to terrorist fighters. They were basically continuing to support terrorism and what we said was we're not going to give you money to continue to do those bad things. The Europeans have a decision to make. And I think that decision is already being made. If you look, they are dropping business from Iran left and right. Iran's economy is plummeting and it's because they can't continue to sustain this. So yes we will have decisions to make in terms of whether they get exemptions or not but I'll tell you right now we're gonna be really tough on Iran. We're not giving them a pass

AMB HALEY: Well I think it's a move in the right direction. I don't think it's a victory until we see it's actually followed through with. We- our goal was to make sure that, first of all no chemical weapons were used in Idlib, but also that no military action was used in Idlib. They're talking about terrorists. There's about 15,000 terrorists while there's 3 million civilians there. And so the responsibility and the caution that has to be used on any offense in Idlib is one that the United States take- takes very seriously. I think the fact that Erdoğan and Putin came together they decided on a cease fire. We have to see if that follows through. We'll know October 15th and I think the world is watching.

JOHN DICKERSON: You said in 2017 regime change is something we think is going to happen in Syria. It seems that in the seven years of the civil war, Assad the leader of Syria, has only consolidated his power. So is it time to just accept that he's going to stay in power for quite a long time?

AMB HALEY: It's hard to imagine a Syria with Assad in power. I think he's going to stay in power for now. The U.S. certainly isn't in any way trying to force him out. But we don't think he's going to stay. There's no way that the Syrian people are going to allow it. There's no way that the Iranians - the Russians - anybody else thinks that having him there is a good thing and so I think it's a matter of time before he's gone.

JOHN DICKERSON: Switch to North Korea. The South Korean leader reports that the North Koreans would allow inspectors but only if the U.S. takes reciprocal measures. So what is the U.S. willing to offer for inspectors?

AMB. HALEY: Well I think it depends on inspectors for what. You know, inspectors for certain sites or inspectors for all sites. And so I think what President Trump has said is we're not going to do any half measures. We have to make sure that we're thorough in this. There are multiple sites in North Korea and we need to have inspectors in all multiple sites if that's going to happen. This is really a conversation about what denuclearization is. What the United States is looking for is denuclearization with complete verification - that they are actually stopping their nuclear program. And so that's a longer conversation. What I can say is we've had a win and that we're not having any more ballistic missile testing. We're trying to focus on the nuclear development to get that to stop as well. I think the idea that the Korean leaders are speaking to each other is a win because we want that region to be at peace. And so this is all baby steps. But I think it's baby steps moving in the right direction.

AMB. HALEY: Well, I think we all knew this wasn't gonna happen overnight. But, John, no one can say this hasn't been a win, so far. I mean, literally, in 2017 it felt like every other weekend we were seeing missile testing. The fact that that stopped, the fact that President Trump and- and Kim have had a conversation and are gonna be meeting again, the fact that we now have them to where their first major parade they weren't displaying nukes. That was the first time in a long time. So these are all great steps. The fact that the two Korean leaders met, and were able to shake hands and talk about peace. This is all progress. But, yes, we do have to talk about verification. We do have to talk about what denuclearization means, and those are all more conversations that have to take place. But I think that, you know, the goal on this is that will only happen if we continue to enforce sanctions.

JOHN DICKERSON: Very quickly, one last question: the Russians said the U.S. was playing with fire with its sanctions on China for doing business with Russia. Playing with fire?

AMB. HALEY: No, we're being fair. China has had their way with trade for- with the United States for a long time. Now, we're just making sure that we're playing back, we're not gonna be taken advantage of. President Trump has a great relationship with President Xi, but he's not going to do it at the expense of the American people.

JOHN DICKERSON: All right Ambassador Nikki Haley, thanks so much for being with us.

Editor's note: The below exchange was removed from the on-air interview due to time constraints:

JOHN DICKERSON: The president took action when chemical weapons were used. This seems to be an evolution though on the question of humanitarian aid. During the campaign the president said intervening in Syria would lead to World War Three. So what's- what's changed in his thinking?

AMB HALEY:  Well I think there's three focuses that the president has had in Syria. Number one is to reduce the Iranian influence. That we still have some work to do to reduce and defeat ISIS we are almost there and that is certainly going to be a win. And the third is to make sure no chemical weapons are used. They- we were challenged on that twice and we responded twice. And so I think everyone on the ground knows they don't want to take that chance on chemical weapons again because President Trump will respond.