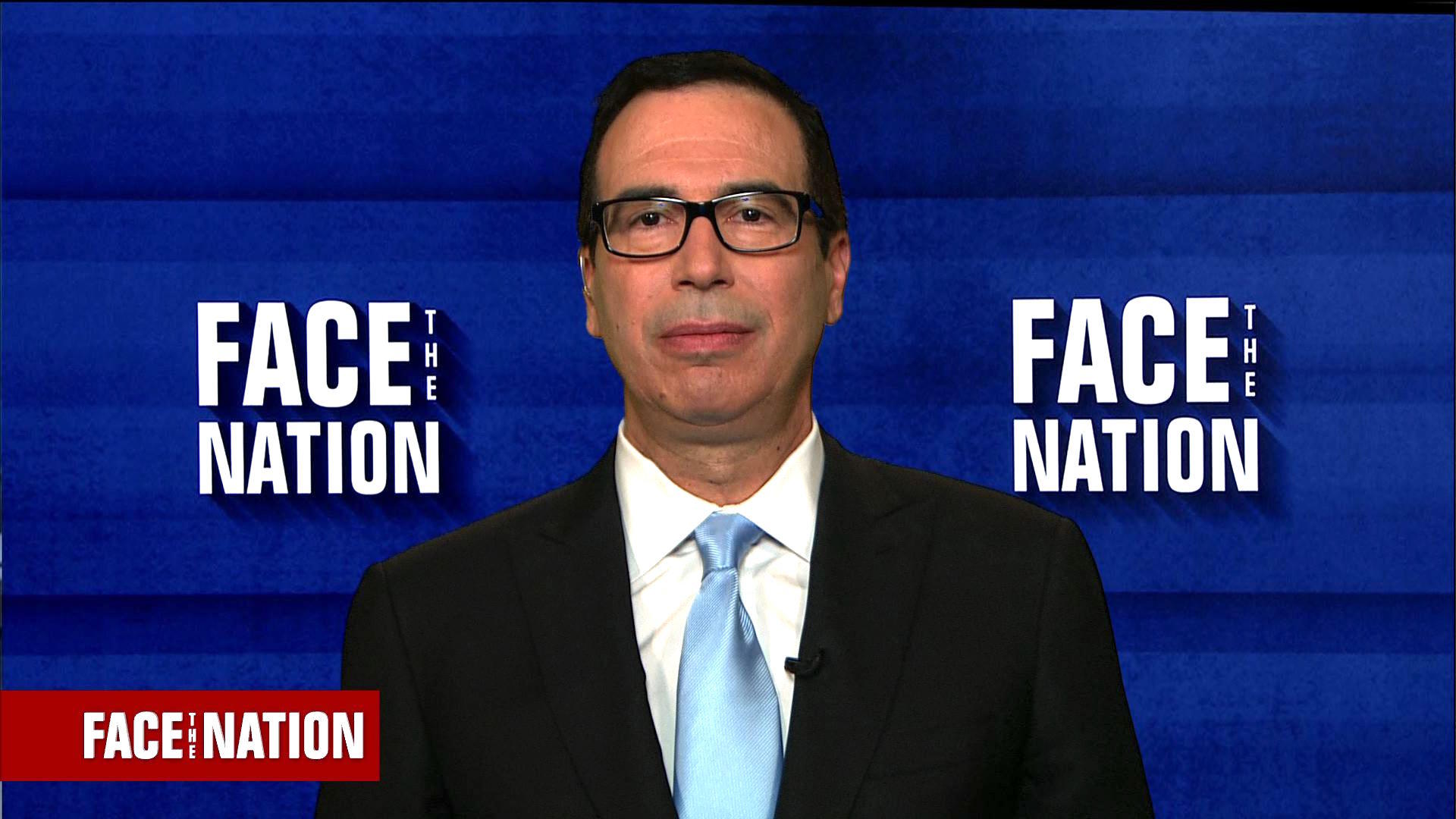 President Trump threatened China with $100 billion in additional tariffs this week, rattling financial markets with fears of a trade war. Treasury Secretary Steven Mnuchin has been a key member of the president's team dealing with trade and economic issues. He joined us to discuss the trade dispute with China, the possibility of an all-out trade war and the suspected chemical attack in Syria.

The following is a transcript of the interview with Mnuchin that aired Sunday, April 8, 2018, on "Face the Nation."

MARGARET BRENNAN: We turn now to Treasury Secretary Steven Mnuchin who joins us from Los Angeles. Good morning Mr. Secretary. As a cabinet official what can you tell us about a potential Trump administration response to Syria.

STEVEN MNUCHIN: Good morning. Thank you. It's great to be here with you. We'll be reviewing the situation later today. I expect to get an update from the national security team. And as you've pointed out with the president's tweet this appears to be another horrible example of the Assad regime, and incredibly targeted.

MARGARET BRENNAN: And a military response is potentially on the table?

STEVEN MNUCHIN: I can't comment on what our response will be or won't be but I expect to get an update later today from the national security team and I assure you they will be reviewing with the president all different alternatives.

MARGARET BRENNAN: Sir on the issue of China you said on Friday there is the potential of a trade war. How should Americans prepare for that risk?

STEVEN MNUCHIN: Well actually I was very clear on when I discussed I said our expectation is that we don't think there will be a trade war. Our objective is to continue to have discussions with China. We want to have free and fair reciprocal trade. We're just looking for our companies and our workers to have a level playing field and right now we have about 500 billion of goods that we buy from China and they buy about 135 billion from us.

So this is one of the single biggest opportunities for American companies and American workers if we are free and fair trade and that's what the president wants. So I don't expect there will be a trade war. It could be, but I don't I don't expect it at all. But the president is willing to make sure we have free and fair trade as you've seen his tweet already this morning and again he has a very close relationship with President Xi and we'll continue to discuss these issues with them.

MARGARET BRENNAN: Well the markets certainly reacted strongly to the even the acknowledgement of the potential risk here. The president, as you said, is tweeting this morning that China will take down its trade barriers because it is the right thing to do. Mr. Secretary has China given any sign of concessions since Friday?

STEVEN MNUCHIN: It would be inappropriate for me to to comment on what our back channel discussions are.

MARGARET BRENNAN: But what is the president referring to or is he just striking an optimistic tone based on his friendship?

STEVEN MNUCHIN: Again, I don't- I don't want to comment on specific discussions and where they stand. What I will emphasize is that this is really our objective is free and fair trade. We've been talking about this for the last year with them it's actually just about a year anniversary since the president's meeting at Mar a Lago and I think the good news is President Xi and President Trump have shared with the economic teams: we have a common objective to make sure we reduce the trade deficit. But President Trump is prepared to defend US interests.

MARGARET BRENNAN: But Sir, because you know this has caused such nervousness in the markets which will be reopening overnight, has there been any progress so far.

STEVEN MNUCHIN: Again we've-we've committed not to comment on specific conversations and we're not going to update specific conversations and what they are and when there is progress and when there isn't progress, you'll know when we reach a deal there's progress and that's our objective. So you know the markets have had a lot of volatility in general the market is still up a tremendous amount since the election. And what we should be really focused on is the strong economic growth -- the tax plan is kicking in our regulatory relief is kicking in. Trade has always been the third part of our agenda-

MARGARET BRENNAN: Right and that's why there's concern that this dispute could disrupt that economic growth that you're talking about that Republicans plan to run on in November.

STEVEN MNUCHIN: That's true. But again let me just put this in perspective. It's only one hundred and thirty five billion of goods in a 20 trillion dollar economy. And if we can open up their 10 trillion dollar economy for us to compete fairly, this is one of the single biggest opportunities long term for US companies. So whatever happens in trade I don't expect it to have a meaningful impact on our economy and the president has said sectors like agriculture he's prepared to defend.

MARGARET BRENNAN: I want to ask you as well that your colleague EPA Administrator Scott Pruitt the president said he's doing a great job seemed to give him a pass on some of these questions about potential ethics violations. Is it the official position of the administration that all of these criticisms are simply political attacks?

MNUCHIN: Well I think as the president said Scott has just done a fantastic job on policy. And again the president believes in clean air, clean water. He believes in proper regulation, just not overregulation and we're determined to be energy independent, that is one of the most crucial long term issues for the United States. And as it relates to the specifics of Scott's situation I can't comment on them but I'm sure the President's reviewed it.

BRENNAN: You're sure he's reviewed it. Has he come to a conclusion? He did acknowledge that he was looking into these potential violations.

MNUCHIN: Uhm, again I think his tweet speaks for itself.

MNUCHIN: Again I haven't had any direct conversations with the president on this I've obviously had a lot of discussions with him on trade and the economy but I know he's very supportive of Scott Pruitt's positions and what he's done there. Tremendous progress.

BRENNAN: All right, Mr. Secretary thank you for waking up early on the West Coast to join us.

MNUCHIN: Thank you very much.