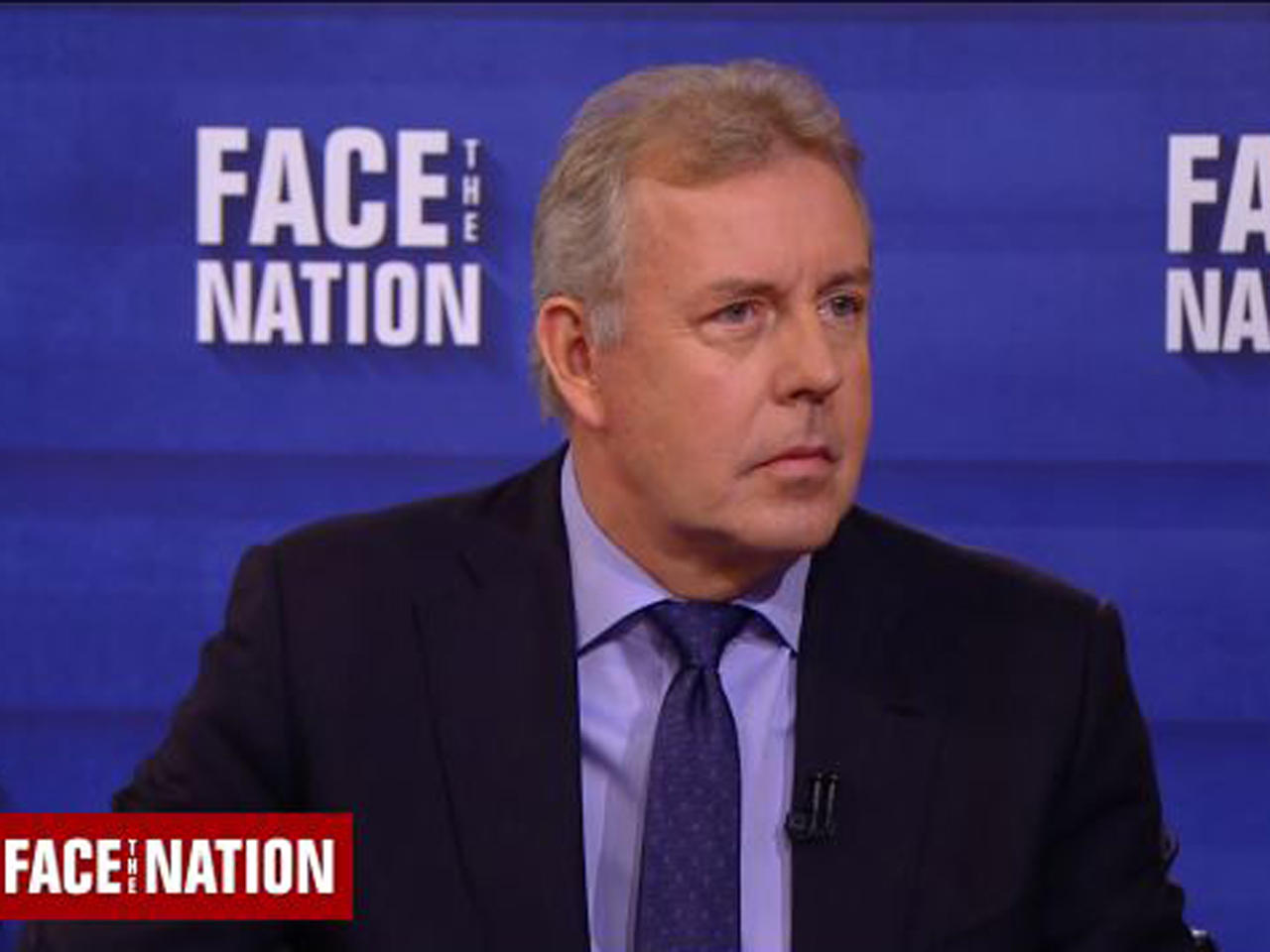 This week President Trump faces a deadline to make a decision about pulling out of the Iran nuclear deal. British Foreign Secretary Boris Johnson, who supports the deal, will be in Washington for two days of talks with administration officials, and he's expected to discuss Iran during his visit.

Late last month, French President Emmanuel Macron urged the U.S. to not abandon the deal in talks with Mr. Trump and in an address to a joint session of Congress.

The following is a transcript of the interview with Sir Kim Darroch, British ambassador to the U.S., that aired Sunday, May 6, 2018, on "Face the Nation."

MARGARET BRENNAN: We're joined now by the British ambassador to the U.S., Kim Darroch. Welcome to FACE THE NATION.

AMBASSADOR KIM DARROCH: Thank you very much for inviting me.

BRENNAN: Mr. Ambassador. Your prime minister spoke with President Trump yesterday. Can you tell us if there was a decision made on the nuclear deal with Iran?

DARROCH: Well, I don't have a full account of the discussion. They talked mostly about North Korea. The prime minister congratulating the president on the progress that has been made. And asking about this forthcoming summit. They touched on the Iran deal but the message we are hearing from all contacts in this administration is that although the president's views on the deal are very clear and have been out there for months and months actually for years, that a final decision hasn't yet been taken.

BRENNAN: And your foreign secretary Boris Johnson will be here to lobby, as many of the European allies of the United States have done over the past week, what do you think is the compelling argument at this-- at this point because as you said the president doesn't like the deal but do you think that you can come up with a side agreement in time for him to avoid putting sanctions on Iran next Saturday?

DARROCH: Well this is the area that we want to talk about. We think it's a good deal. It's not a perfect deal, no deal ever is perfect, and the president is rightly concerned about Iran's regional activities, which are malign and damaging to security and stability. And he doesn't like the-- the fact that missiles aren't covered. He's not happy about the sunset clauses, he thinks the inspections regime should be tougher. On those issues, we have ideas we think that we can--we can find some language, produce some action that meets the president's concerns

BRENNAN: This week? You're ready to close that side agreement this week?

DARROCH: We have been talking at senior official level to the administration with our French and German colleagues for several weeks now. We think we're making progress. We haven't got there yet. We have a few days left to see if we can find a way through.

BRENNAN: The president's national security adviser John Bolton was on this program last week and he said despite all these public statements about his own personal misgivings about the deal, he will still present the president with the option you're working on here, do you take him at his word?

DARROCH: Absolutely. I know John well. I've talked to him about this. Our own national security adviser was over a week ago talking to him. Absolutely. I mean--

BRENNAN: Do you think you have a fair shot?

BRENNAN: President Macron of France said if this deal is blown up that it opens a Pandora - Pandora's box and will spike tensions in the region. Are you prepared for that?

DARROCH: Plan A is that the U.S. stays in the deal. That's what we're working towards.

BRENNAN: But you're a diplomat, you're working on Plan B?

DARROCH: But of course we are looking at all eventualities. My government has said that as long as Iran is in compliance with the deal and wants to stick with it that will be our position as well. So we're looking at options for maintaining the deal should-- which we hope they won't-- should the U.S. administration choose to withdraw.

BRENNAN: I want to ask you. On Friday the president was speaking at the NRA and he spoke about a spike in knifings and murders in London. I want to play that bite for you.

PRESIDENT DONALD TRUMP: I recently read a story that in London, which has unbelievably tough gun laws, a once very prestigious hospital right in the middle is like a war zone for horrible stabbing wounds. Yes, that's right. They don't have guns. They have knives and instead there's blood all over the floors of this hospital. They say it's as bad as a military war zone hospital. Knives, knives, knives. London hasn't been used to that. They are getting used to it. Pretty tough.

BRENNAN: It was very controversial back home for you. Does this complicate the president's visit?

DARROCH: I don't think it complicates the president's visit. Every country has an issue with knife crime. And so yes, tackling it in the U.K.-- actually we've just introduced about a year ago a new strategy on tackling this and we are consulting at the moment as a government about new legislation to make it even harder for people to acquire the kind of knives that are involved in these crimes. So action is in hand. And the president's right. We do have extraordinary strong gun laws in the U.K. and we will keep them.

BRENNAN: Later this month, what all Americans are watching for is this royal wedding. An American, Meghan Markle will be marrying Prince Harry. What does this mean to the British people to have an American in the family?

DARROCH: I think the British people are thrilled that an American is marrying Prince Harry. I think Meghan Markle has done an extraordinary job since the announcement of the forthcoming wedding in terms of her public appearances. I think she's already much loved amongst the British people. I think it's wonderful news not just for the two of them and for the families but also for the relationship between the U.K. and the U.S. so we're thrilled for it.

BRENNAN: We'll be watching. Thank you very much, Sir Darroch.

BRENNAN: We'll be back in a moment.