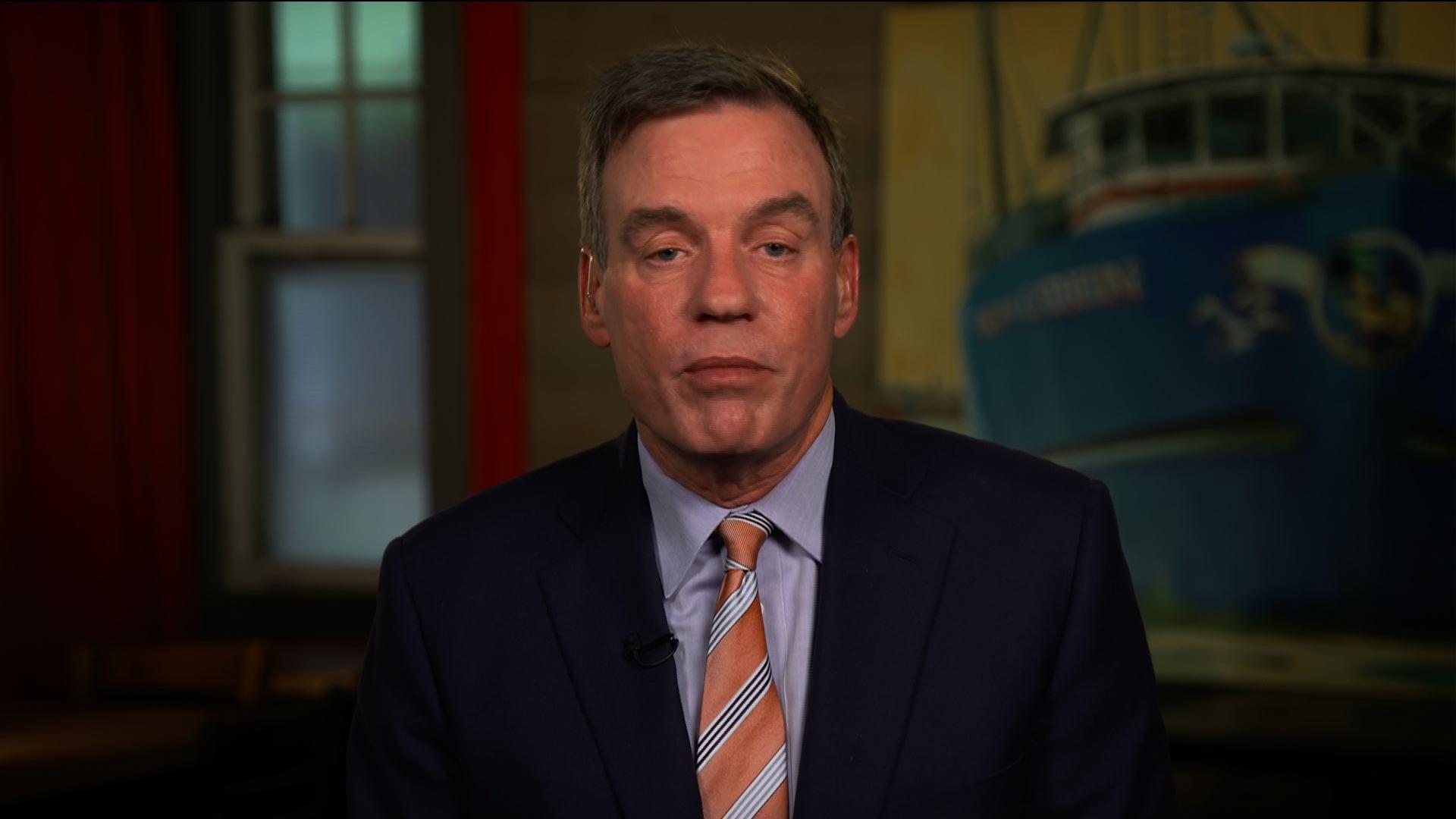 President Trump's troubles with questions about his campaign's ties to Russia intensified with the release of emails showing his son, Donald Trump Jr., arranging a meeting with a Russian attorney last year in the hope of obtaining incriminating information on Hillary Clinton.

On Sunday, "Face the Nation" sat down with Sen. Mark Warner of Virginia, the top Democrat on the Intelligence Committee, to discuss the latest on the investigations into Russian interference in the 2016 election.

What follows is a transcript of the interview, which aired Sunday, July 16, 2017, on "Face the Nation."

JOHN DICKERSON: Good morning and welcome to Face the Nation. I'm John Dickerson. Senator John McCain underwent surgery Friday to remove a blood clot above his left eye. He's back at home with his family in Arizona but is not expected back in Washington for a week. Senate Majority Leader McConnell needs his vote to pass healthcare reform and so has postponed the vote on the bill.

We'll be talking about the impact of that in a moment. But we begin with the latest on the investigations into Russian interference in the 2016 election. For that we turn to the top Democrat on the Senate Intelligence Committee, Mark Warner. He joins us from Oak Bluffs, Massachusetts. Senator, I want to start with the news this week about the president's son in a meeting advertised as being with a Russian government agent. How does that change what you're doing in the committee?

SENATOR MARK WARNER: Well, John, this is the first time that the public has seen in black and white on the email thread clear evidence that the Russians and particularly there was a Russian government effort to try to undermine Clinton, help Trump. And what was remarkable was you saw not only willingness but actually glee from the president's son as well as involvement of the campaign manager and the president's son-in-law to say in effect, "Yes, bring it on." Very troubling. And obviously moves our whole investigation to another level.

JOHN DICKERSON: And- and what is that level? Because, of course, the president's son says, "Well, nothing came from the meeting. So no big deal."

SENATOR MARK WARNER: How do we know? Because the president's son has not been forthcoming about this meeting. At first he said it was about Russian adoptions. At first there was indication it was just four people. It was actually many more people. We don't know what transpired in that meeting until we get a chance to talk to all of the individuals who participated.

Now, we hear there may be as many as eight people in the meeting. And so all of this constant refrain from the president's son, from the president himself that there was no there there, that the whole thing is a witch hunt, these folks have been saying that for a year. Yet over a year ago we know they had clear evidence as well that there was a Russian government effort to undermine Clinton and help Trump. So all of these denials over the past year really are now put in doubt as well.

JOHN DICKERSON: Will you be calling the president's son to testify and the others who were in that meeting?

SENATOR MARK WARNER: I want to hear from everyone in that meeting and get their version of the story. As well as I think we may find out there may have been other meetings as well. We don't know that yet. But what we've seen is a constant effort to hide contacts with Russians. We've seen this pattern repeat itself.

We saw General Flynn lie about meetings and get fired. We saw the attorney general not disclose meetings and have to recuse himself. We saw the president, we saw the administration put out one reason for firing Comey. Then the president himself said the reason they fired Comey was because of the Russian thing. Clearly this administration has not been forthcoming about what they know and when they knew it in terms of Russian involvement in the elections.

JOHN DICKERSON: Is Chairman Burr on board with having all those people investigated as part of the committee work?

SENATOR MARK WARNER: Listen. Chairman Burr and I are working together in a bipartisan fashion. And we've heard not only from the chairman, but we've heard from Susan Collins, James Lankford, a series of other Republican members on the committee as well saying, "We need to talk to all these folks." I know we will.

JOHN DICKERSON: You mentioned there may have been other meetings. Is that just your extrapolation? Or do you have any evidence?

SENATOR MARK WARNER: Yeah, I don't want to break news here. That's my extrapolation. What we have, what we know is that this whole group of individuals are not forthcoming about their meetings with Russians until they have proof. Then they have to recant or amend their forms. We now have Jared Kushner having to have three separate times where he forgot, conveniently forgot about meetings with Russians.

I would think if you had a meeting with agents of the Russian government where they were bringing forth information to discredit Clinton and help their then-Candidate Trump I would think a rational person would remember that. That's one of the reasons why we want, we want to question him and all the other participants of that meeting.

SENATOR MARK WARNER: Other members have weighed in on that. I'm going to give Mr. Kushner the benefit of the doubt until we get a chance to question him. But it does seem strange to me that he didn't forget once, not twice, but three separate meetings with senior-level Russian officials. And he conveniently forgot to put any of those on his initial filing.

JOHN DICKERSON: You- Another area that it appears you're interested in is the data operation of the Trump campaign, which Jared Kushner was overseeing. Explain that. And is that, again, another extrapolation? Or do you have some evidence for that inquiry?

SENATOR MARK WARNER: Well, we do know that there was a series of Russian trolls, paid individuals, who worked for the Russian services that were trying to interfere and put fake news out. We also know they created what's called bots. In effect, internet robots that actually could interfere as well.

SENATOR MARK WARNER: We do know as well that Facebook, for example, that denied any responsibility during our election, by the time the French elections took place this past spring, they literally took down 30,000 fake sites. So they have in effect got religion about the need to police fake news.

SENATOR MARK WARNER: We also know that Twitter -- it's been reported that literally 8% of the Twitter accounts are fake. So those accounts can be manipulated as well. I'd like not to re-litigate 2016. But I think the whole role of these social media platforms, in terms of disseminating fake news, is a policy question that we're going to have to address.

JOHN DICKERSON: Let me ask you about the question of obstruction of justice. In the middle of June, there was a report that you and Chairman Burr after speaking to Special Counsel Mueller were not going to be looking into the obstruction of justice question. But then another report that- that Chairman Burr was working to get those memos that James Comey wrote about his meetings with President Trump. Those memos are all about obstruction. So why if you're not looking into obstruction do you want memos that are sent- that are only about the question of obstruction?

SENATOR MARK WARNER: Well, John, obstruction of justice falls into the criminal reign. And that's where Special Prosecutor Mueller, that's his responsibility. Ours is a counterintelligence investigation. And we want to try to get all the truth out about what happened. I've had a chance to review those memos.

JOHN DICKERSON: Having reviewed those, do you think there was obstruction? And just to button it up, are you investigating obstruction?

SENATOR MARK WARNER: Listen. Obstruction of justice is criminal. That's for Bob Mueller to look into. We want to try to make sure we get all the facts out about the involvement of the Trump campaign and the Russians. It's unfortunately dribbling out because this administration has not been forthcoming. But I want to get all this information into the public realm.

JOHN DICKERSON: So you're- that's a no? You're not investigating obstruction?

SENATOR MARK WARNER: Obstruction is a criminal charge. That's for Bob Mueller to look into. But for us to get all the information out about contact between Russians and the Trump campaign, that's our responsibility.

JOHN DICKERSON: Okay, senator. We'll leave it there. Thanks so much.