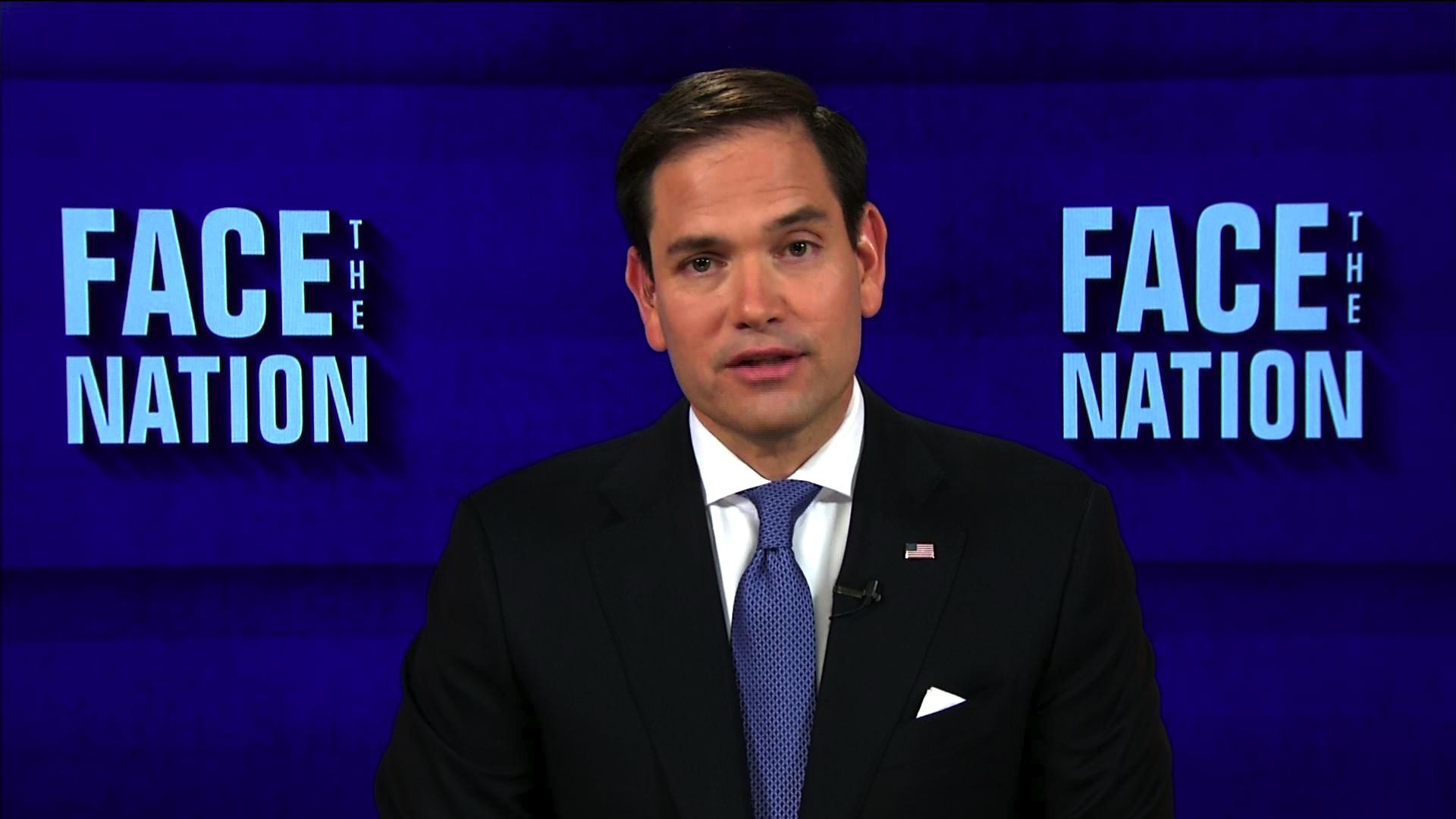 In the immediate wake of Wednesday's shooting during a congressional baseball practice, calls for unity rang throughout the halls of the Capitol. For a brief moment, the tragedy overshadowed the drama surrounding multiple investigations into Russia's meddling in the 2016 U.S. presidential election.

"Face the Nation" sat down on Sunday with former Republican presidential candidate Sen. Marco Rubio (R-Florida), who is a member of the Senate Intelligence Committee. Rubio discussed the shooting, as well as investigations, and more.

JOHN DICKERSON: And we begin this morning with Florida Republican Senator Marco Rubio, who joins us from Miami.

JOHN DICKERSON: The president has called the investigations a witch hunt. What's your opinion of that?

MARCO RUBIO: Well, I know he feels very strongly about it. My advice to the president is what I communicated publicly. The way I've tried to communicate to everyone on this issue. And that is this. It is in the best interest of the president and the country to have a full investigation.

I really - If I were the president, I would be welcoming this investigation. I would ask that it be thorough and completed expeditiously and be very cooperative with it. That's what ultimately I anticipate they will do. That's in the best interest of the president. I really believe that. I think it's in the best interest of our country that we have a full-scale investigation that looks at everything so that we can move forward.

JOHN DICKERSON: So regardless of what you may think about James Comey's firing as F.B.I. director, you think it should be investigated?

MARCO RUBIO: Well, I just think it's important to answer questions. Because otherwise, if people have any doubts, it undermines confidence in our system of government, in our elections, in our leaders. As I said, I - the best thing that can happen for the president and for America is that we have a full-scale investigation that is credible, that it reaches its conclusion one way or the other so that we can move on. But at the same time be knowledgeable. We have to know everything the Russians did and how they did it so that we can prevent this from happening in the future.

JOHN DICKERSON: Let me ask you about what the Russians did. You voted for the sanctions bill in the Senate that would punish the Russians for that meddling. Do you think the president will sign that when it gets to him?

MARCO RUBIO: I hope so. It's important to send that message, that this is - as I said, that this is not acceptable. And I remember back in October when those leaks came out and I was, I think, one of the few Republicans in the country that wouldn't discuss WikiLeaks. Because I don't want that to be a part of our system here.

We can simply not allow foreign governments to be meddling and interfering in our elections that way, but they're going to keep doing it. They're doing it now. They'll keep doing it in the future. We need to know how they do it so that Americans are more knowledgeable about that and take that into account when making their decisions at the ballot box.

MARCO RUBIO: It is but not perhaps for the reasons people think. A lot of people - It has nothing to do with the investigation per se. It's more along the lines of the secretary of state believes that he wants to explore the opportunity to get Russia to be more cooperative on a number of issues.

It's a foreign policy view that they have. And so they think that these sanctions may undermine that effort. And while I respect that point of view and have considered it, ultimately I think it's incredibly important for us to make clear that there are consequences for doing what they did during the 2016 election. And that's why I supported these sanctions.

JOHN DICKERSON: Let me ask you about Cuba. Speaking of consequences, there are new provisions the president has put in place to put pressure on Cuba for its human rights record. But when the president-- go ahead.

MARCO RUBIO: Go ahead. I'm sorry. No, no. I wouldn't view it just as putting pressure. I really don't. I think this is an effort to strengthen individual Cubans. Understand what this does. This basically says that American travelers to Cuba, they'll continue to fly on commercial airlines or get there in a cruise.

But when they get there, they have to spend their money primarily with individual Cubans who own private businesses, which is what everybody who supported the Obama opening was always bragging about. They were saying there was all these new small businesses. Well, we want to put them in a privileged position.

And so American travelers to Cuba will have to spend their money with them instead of the Cuban military. That was the goal of this, is to empower individual Cubans to be economically independent of the Castro military and of the Castro regime.

JOHN DICKERSON: But when the president gave his speech, he said that, "We will not lift sanctions on the Cuban regime until all political prisoners are freed." He talked about freedom of assembly. He talked about all political parties being legalized. So I guess what I was interested in is that when he went to Saudi Arabia, he said he's not going to lecture Saudi Arabia about its considerable human rights challenges and what's happening in Yemen that Saudi Arabia is funding. And I wondered if you could square for us on the one hand a very public lecturing of the Cubans and no lecturing of countries like Saudi Arabia, Egypt, Turkey and how you see that.

MARCO RUBIO: Yeah. Well, a couple points. First of all, what you talked about, not lifting sanctions until they have elections, that's actually the law. That's the law of the United States. It's codified under Helms-Burton. It says that. The embargo goes away when they meet these conditions. And you've outlined them. And the president outlined them.

As far as squaring the two, obviously the administration will have to do that because I criticize Saudi Arabia as well. In fact, I - I take a backseat to no one on criticizing them or anybody in the world when it comes to human rights and the violations or lack of democracy.

I will say this, however. This is in our region. This is 90 miles from our shores. The western hemisphere 35 years ago was largely controlled by dictators. Basically every nation in this region has had a free and fair election at some point over the last 20 or 15 years except for one. And that's the island of Cuba.

JOHN DICKERSON: Let me ask you about domestically the issue of health care. Your Republican colleague Senator Ron Johnson said, "I want to know exactly what's in the Senate bill. It's not a good process." What's your assessment of the process of evaluating health care in the Senate?

So I have no problem with a group of people meeting to conduct a proposal. But ultimately that proposal cannot be rushed to the floor. And I don't think the Senate rules would permit it. So it's fine if they're working on the starting point. But ultimately we're all going to see what's in it.

The whole world is going to see what's in it. And then the rest of us or all of us are going to have an opportunity to make changes to it as a condition of our vote. And so that's the way I view this. This is not the - The Senate is not a place where you can just cook up something behind closed doors and rush it for a vote on the floor. There's just - Especially on an issue like this. So the first step in this may be crafted among a small group of people, but then everyone's going to get to weigh in. And it's going to take – you know it's going to take days and weeks to work through that in the Senate.

JOHN DICKERSON: Finally, senator, the shooting this week in Washington. What do you think is the lesson in the aftermath of the?

MARCO RUBIO: Well, I mean, the only person to blame for that shooting is that person who did it, who is obviously someone who had big problems both mentally and other - behaviorally. That said, I do think it's an important moment for us to understand that violence is the opposite of dialogue.

And we in this nation have the first amendment. And while the law continues to protect the first amendment, I think we have to ask ourselves whether we are culturally cracking down on free speech, where we've reached the point now where we're blocking people from speaking because we disagree with them.

You know, it's funny on the one hand to hear people say, "We should be engaging in dialogue with Raul Castro," and yet you have mainstream politicians in the United States being boycotted at graduation speeches across America. We cannot have a whole generation of young Americans growing up to believe that if you disagree with someone's points of view, the way to do it is to try to shut them down.

I'm not saying that's the shooting. I am say that we have to be as a nation capable of debating issues on the merits of the issues without dehumanizing or demonizing the person on the other side. You and I can disagree on the right approach to Cuba, taxes, or health care. I don't have to go around telling you you're a evil human being for what you believe in.

Because once you convince someone that the other side is evil, that I think in the minds of a deranged individual is an invitation to commit a violent act against them. I'm not blaming the shooting on any Democrats or the left. I'm just telling you both sides need to think about that as we move forward.

JOHN DICKERSON: All right. Senator Marco Rubio, thanks so much for being with us.