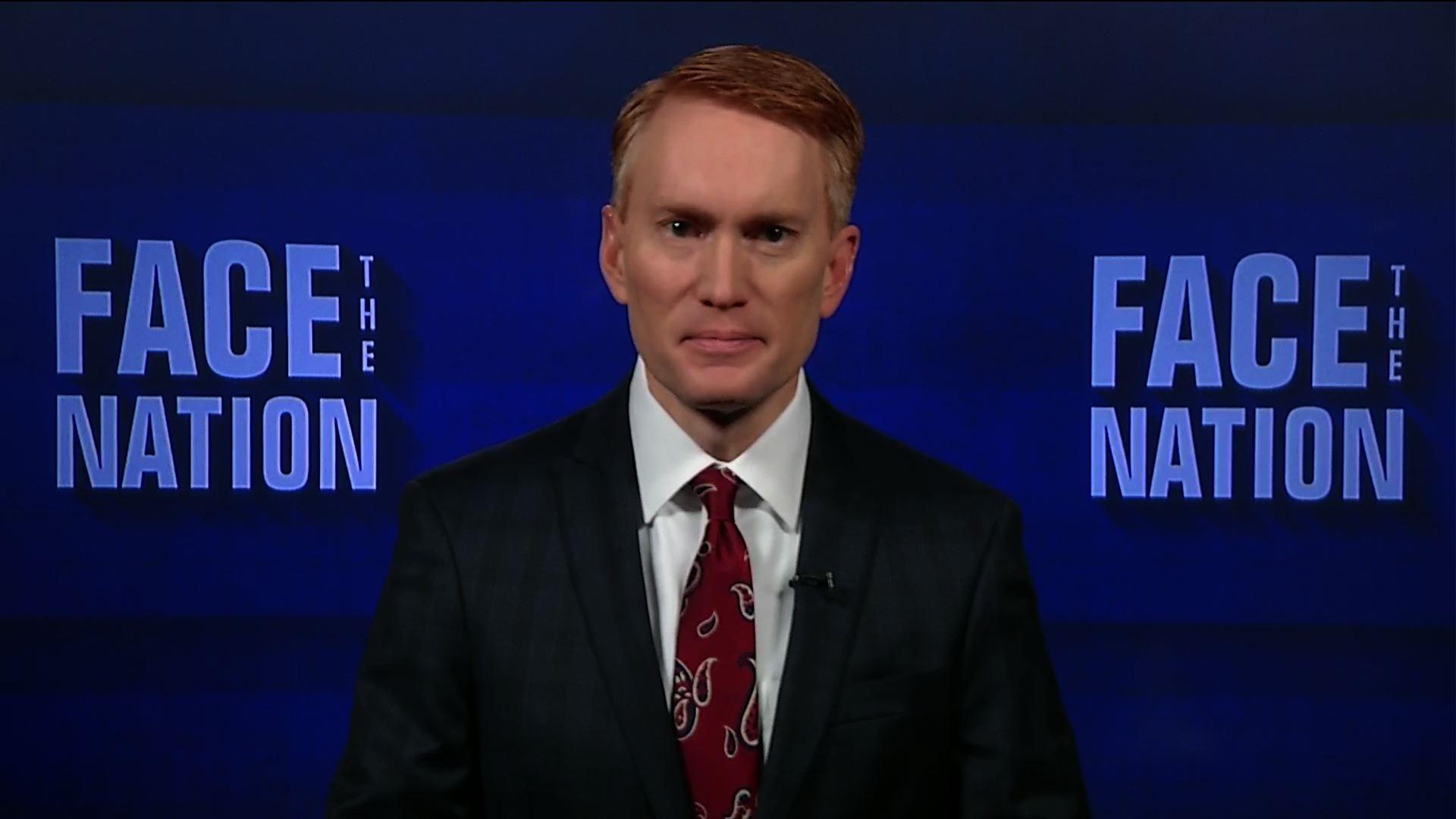 What follows is a full transcript of the interview, which aired Sunday June 11, 2017 on "Face the Nation."

JOHN DICKERSON: We turn now to Senate Intelligence Committee member James Lankford. He joins us from Oklahoma City. Good morning, senator. I want to start with Director Comey's testimony. Now that it's done, is the committee's work in looking into whether the president tried to influence the investigation, is that done now?

JAMES LANKFORD: Oh no. Far from it. This is one interview of about 36 that we've already done. We're not complete yet. We've gone through thousands of pages of documents. If-- if in any way we left the impression this was the culmination of our process, that would be incorrect. This is only the midpoint of it.

We're trying to get all the facts out both on Russia's trying to interfere in our election, if any American tried to be able to reach back to them to be able to assist Russia in interfering-- our election, and how classified documents got into the public sphere. So we're still in the middle of that.

JOHN DICKERSON: And does that also-- being in the middle of that also includes looking into the president and what he may or may not have done with respect to the ongoing investigation?

JAMES LANKFORD: Sure. That's just part of the process. Obviously if there was any American, including the president, who was trying to interfere in the election or tried to an obstruction of justice, that would be very important to know. Obviously there's a criminal investigation that's ongoing with a special counsel.

We have a unique policy role in it and an oversight role to make sure nothing's missed. So the special counsel and the FBI, we go through all the documents. We want to make sure they've seen everything, they've gone through everything. They're doing their criminal work, but we have a policy set of issues that we also have to go through. And we're going to continue to work our way through everything.

JOHN DICKERSON: What do you make now that it's been a few days of former Director Comey's testimony?

JAMES LANKFORD: It--it was surprising. A lot of people have asked me lately even here in Oklahoma, "Did you learn anything from it? Was there-- things that were new?" And, yes, there certainly were things that were new. Things like Director Comey stepping in and saying, "Yes, I leaked those documents to be able to get out the information of my memos."

For him to say, "The president did ask me about it three times," or he voluntarily, that is, said, "You're not under investigation," to the President of the United States. Comey also made it very clear during his testimony multiple times that the president never asked him to stop the Russia investigation, that the comments about, "I wish you'd let this go," related to Michael Flynn but never came up again.

And no one from the White House ever brought it up to him again after that initial conversation February the 14th. So we're trying to evaluate what really happened, what's the background of it, what other information can we gain. We also obviously went into a classified session with Jim Comey to go into greater detail on the Russia portion of it. So what a lot of people saw was the open portion of it, was more the palace intrigue of his firing and all that transition. In the private meetings, but we have a lot deeper information to get to.

JOHN DICKERSON: Let me ask you about the question of leaks. You pay a lot of attention to that on the Senate Intelligence Committee. On the scale of, at the one hand, leaks that are just inconvenient but nothing illegal to those that are illegal and damaging to national security, where do you put the leaks that-- the leaks from James Comey on that scale?

JAMES LANKFORD: Yeah, releasing his memos is not damaging to national security. Now, is it appropriate? No, it's not. And I would tell you, FBI agents would tell you they are told they can't take any work product home with me. And certainly once they leave the FBI they can't keep some of the documents they created on official computers and take them home with them to be able to do that.

We still don't know if there's actually a recording. The president obviously made that tweet. And I would assume the same as Jim Comey does, that I hope there are recordings for Jim Comey's sake if that's out there. But I doubt that they're really there. We've obviously pressed the White House-- try to get a firm answer from them on that.

JOHN DICKERSON: The president said he'd be willing to testify under oath. Would you like to question the president? And what would you ask him?

JAMES LANKFORD: Well, the only--only question I would really have for the president, the same things that he's already answered publicly. And that's to be able to put out any cooperation with the Russians of any type.  Obviously he's not under investigation, there hasn't been a direct accusation -- how he pressed Jim Comey, why that conversation even came up on a one-on-one meeting. But there's not a lot of great information. There hasn't been a--a direct accusation on the president actually being involved with the Russians. It's been people around him in his-- in his campaign. So for me there's not a lot of questions directly to him.

JOHN DICKERSON: On the question of influencing the investigation, again, thinking about the scale, on the one hand the president might have done something that was a little bit crossing a line, but--but he's a new guy to the job, all the way to this question of obstruction of justice. Where do you put, knowing what you know about the president's behavior, where do you put what--what he did on that scale?

But the way that it was handled, with no follow-up, with no other press, with no other return to that topic, it looks like what I called a pretty light touch. If this is trying to interfere in a—in a process of any investigation, it doesn't seem like it was 1) very effective and 2) it came up more than once in a conversation.

JAMES LANKFORD: -- So this looks more like an inappropriate conversation than obstruction.

JOHN DICKERSON: Next week you'll get to talk to Attorney General Jeff Sessions. First, will that be in public or private? And what do you want to know from him?

JAMES LANKFORD: We--we have not disclosed and finalized public or private. I assume that this will be public, but we're still in that final conversation time with Jeff Sessions. The key things we've got to get: obviously his side of the story related to Jim Comey -- some of the conversations that Jim Comey had with the president where Jeff Sessions was a participant there or at least was around it to be able to get the rest of the story; Comey's statement to him of, "Hey, I don't want to get time alone with the president again," and that interaction; as well as these accusations that are flying out there about conversations that he might or might not have had with Russians prior to the election. So we want to be able to get his side of it, get all the facts out there. We've had a lot of unnamed sources in the media come out and make statements about Jeff Sessions. It'd be very good to get it directly from him.

JOHN DICKERSON: All right. Senator Lankford, thanks so much for being with us this morning.

JOHN DICKERSON: We'll be back in one minute.