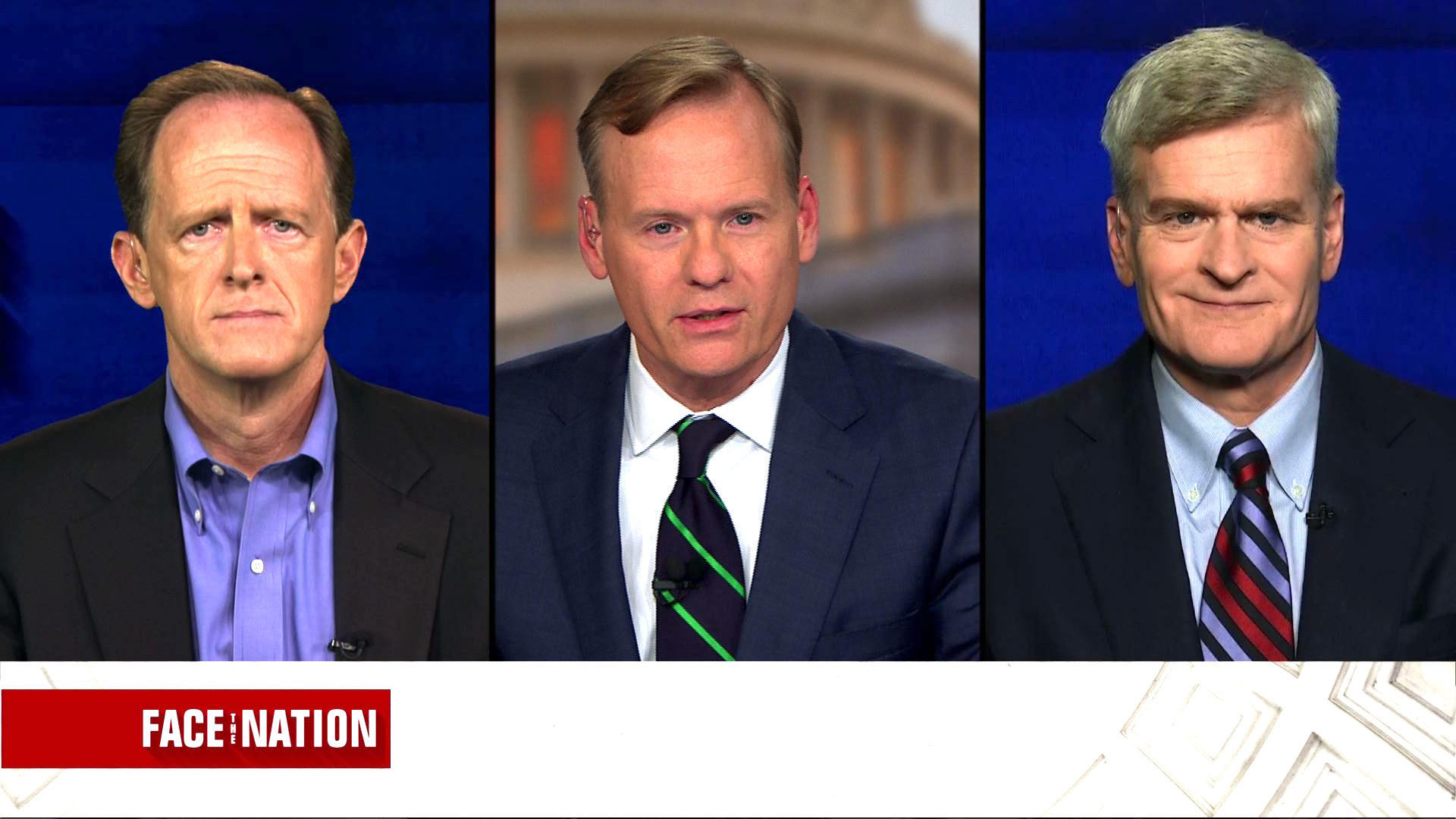 Senate Republicans rolled out on Thursday their alternative to Obamacare and the health care plan that's been approved by the House.

A small group of GOP senators have come out against the bill in its current form. With universal opposition from Democrats, just three Republican no votes would kill it.

"Face the Nation" sat down on Sunday with Sen. Pat Toomey, R-Pennsylvania, who is a member of the working group that wrote the bill, and Sen. Bill Cassidy, R-Louisiana, who is a member of the Senate Health, Education, Labor and Pensions Committee and has described parts of the bill as "positive." Toomey and Cassidy discussed the Republicans' health care plan.

JOHN DICKERSON: We're joined now by Republican Senator Pat Toomey who is in Bethlehem Pennsylvania and Louisiana's Bill Cassidy who is in New York this morning. Senator Toomey I want to start with you. There seems to be two criticisms of the bill, we just heard Senator Manchin on the Democratic side, but on the Republican side there are two criticisms, that too much Obamacare left in place and then criticism from say Senator Heller which is that these Medicaid cuts are too big. How do those get solved?

PAT TOOMEY: Yeah. Listen, it's going to be a challenge but I have to strongly disagree with the characterization that we are somehow ending the Medicaid expansion. In fact, quite the contrary. The Senate bill will codify and make permanent the Medicaid expansion and in fact we'll have the federal government pay the lion share of the cost. Remember, Obamacare created a new category of eligibility: working aged, able bodied adults with no dependents for the first time became eligible for Medicaid if their income is below 138 percent of the poverty level. We're going to continue that eligibility. No one loses coverage. What we are going to do, gradually over 7 years, is transition from the 90 percent federal share that Obamacare created and transition that to where the federal government is still paying a majority, but the state's are kicking in their fair share, an amount equivalent to what they pay for all the other categories of eligibility.  Some of my conservative friends who are concerned  that the bill doesn't go far enough. I am sympathetic about the kinds of reforms they would like to make to lower premiums through more market forces  and greater freedom on the part of consumers, but I see this bill as a first step. An important step in the direction of repealing those portions of Obamacare that we can. Stabilizing the individual market which is collapsing and making important reforms to Medicaid. It's not the last step.

JOHN DICKERSON; Alright, let me ask, Senator Cassidy you served in a low-income hospital with a lot of folks when you were practicing as a doctor. Picking up on what Senator Toomey said, the worry is on Medicaid is that, as the amount of money shrinks, states just won't be able to cover all the people that need to be covered. What's your sense of that and is that something that can be solved?

BILL CASSIDY: People will move off the Medicaid expansion onto the private health insurance market and that can be a good thing. It isn't so much whether we are spending lots of money on Medicaid, it's whether or not people are covered. Now I have concerns about the bill, but let's acknowledge that as folks would move off Medicaid, they would go on private insurance, coverage would continue, and in some cases that actually gives the patient more options for for doctors that they can see then does Medicaid. So I think coverage could continue.

JOHN DICKERSON: Will you support this bill Senator?

JOHN DICKERSON: Senator Toomey, on this question of people moving off Medicaid and into the private market, the concern from critics is that moving them off into the private market puts them into a market where they will be unable because the subsidies are going away or are lowered in this bill or the tax credits are shrunk in this bill, and because -- basically people will be in a market where they can not afford - if the premiums are low the deductibles will be too high, or both premiums are high and deductibles are high.

PAT TOOMEY: Yeah John. Obviously we have thought about that and this bill provides very generous tax credits. It's considerably more generous than the House. They are more oriented toward more low income people, and those are the people who obviously need it. And I would also point out, I think it's important to note, the federal government spending on Medicaid is going to grow every year. It's never going to be cut. It's never going to shrink. It will eventually be growing at a slightly slower rate and we need that to make the program viable and to deal with these massive deficits and the mounting debt that we have.

JOHN DICKERSON: Alright Senator Toomey, Senator Cassidy we're going to be right back in a moment. We've got a hard break here. So we'll take that break and we'll be back with more on healthcare in a moment.

JOHN DICKERSON: Welcome back to Face the nation. We're back with more from Pennsylvania Senator Pat Toomey and Louisiana Senator Bill Cassidy.

Senator Cassidy, I want to start with you. In reporting on this and talking to Republicans, two things they really like in this bill are that it changes the Medicaid entitlement, something Republicans have been trying to do for a while to shrink costs, and it repeals a lot of the tax increases that are part of Obamacare. How do those two big items make people healthier?

BILL CASSIDY: First, Medicaid in its current form is not sustainable. If you look even under the Affordable Care Act, the state's portion of the Medicaid expansion cannot be sustained. In my state it'll be 310 million dollars a year, in California 2.2 billion dollars a year just for the state's portion. Now, I worked in a public hospital for the uninsured and saw many Medicaid. Why was I seeing Medicaid at a hospital for the uninsured? Because states could not afford their match, paid doctors so poorly that patients could not go see a private physician. if we can put Medicaid on a sustainable path where the state is receiving a certain amount of money and can budget for that and the state in turn gives it to managed care organizations, federal, state, managed care,   the patient will have certainty as to their access. I actually think that's better for patients. I think that can improve outcomes and it's certainly better for the state and the federal taxpayer.

JOHN DICKERSON: Senator Toomey you mentioned that there won't be cuts just there will just be the rate of growth will be slowing. On the specific question of Medicaid, but Governor John  Kasich knows about budgeting, he was a former budget chairman of the House, so he knows the difference between cuts and slowing the rate of growth. And he said that in talking about this plan that he worries that it cuts resources needed to help our most vulnerable. That's a republican governor. Another Republican governor, Brian Sandoval says, " There are our friends, these are our families and these are our neighbors," who he worries will get hurt as the rate of growth slows because they just don't think that that will be able to cover future Medicaid participants. So, they know the issues here. Why are they wrong?

PAT TOOMEY: Well, Senator Kasich was very much in favor of this very approach when he was a chairman of the Budget Committee in the House. Look, I get that governors like having a lot of federal money come in and spent when they don't have to even raise it. But the reality is this is going to grow. This is going to grow for the permanent future. We're going to fund the lion's share of even this new population within Medicaid that most Republicans didn't support in the first place. But you know there's another fundamental aspect to this. What we're trying to do is free the states and free the marketplace to discover ever better ways to deliver services. There's wonderful innovation that's happening all across the country. In Pennsylvania, whether its  Independence Blue or Geisinger, you know, an insurer and a healthcare provider. They are finding great new ways to deliver ever better care at lower costs, but there are constraints on the ability of insurance companies and providers to do that.  We want to diminish those constraints, so that we can continue through a creative process, discover better ways to do this and this legislation at least takes us in that direction.

JOHN DICKERSON: Alright, Senators we are very grateful. Thank you both for being here.