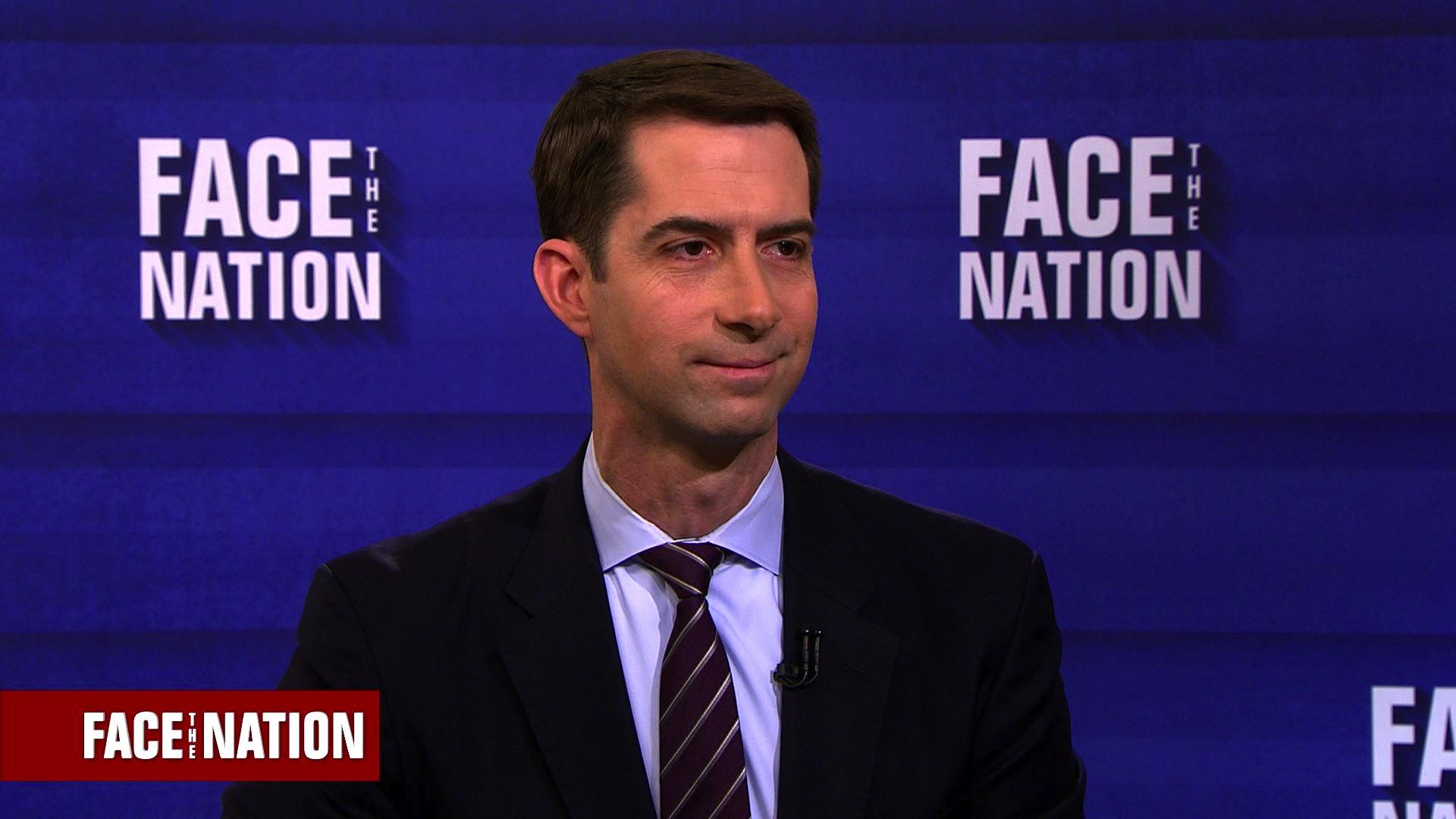 During a meeting with lawmakers in the Oval Office this week on immigration, President Trump questioned why the U.S. accepts immigrants from what he called "sh*thole" countries like Haiti and African nations. The comment caused a furor in Washington and around the world as the administration and Congress try to reach a deal to keep the government open and reform parts of the U.S. immigration system.

Sen. Tom Cotton, a Republican from Arkansas, has attended multiple meetings with the president on immigration throughout the past year. He has proposed his own plan that eliminates the visa lottery system and cuts legal immigration by 50 percent over a decade. Cotton was in the meeting at the White House on Thursday, but he says he didn't hear the president make the derogatory statement.

Cotton joined "Face the Nation" to discuss the immigration debate, as well as the false alarm of a missile attack that rattled Hawaii.

The following is a transcript of the interview with Cotton that aired Sunday, Jan. 14, 2018, on "Face the Nation."

JOHN DICKERSON: Joining us now is Arkansas Republican Senator Tom Cotton, a member of the Armed Services and Intelligence Committee who attended the immigration meeting with the president. And we're going to talk about that meeting in a moment. But first, we want to get your thoughts, senator, on this false alarm in Hawaii. We've heard a lot about the imminent threat from North Korea. Shouldn't the system be a little bit better? And also, the president's reaction was to talk about fake news, but is there a presidential role to kind of focus the mind on this issue?

TOM COTTON: Well, good morning, John. First off, I want to express my regret to every family and every person in Hawaii who was scared by this alarm and took some fairly drastic steps. I think it's appropriate that we give the government of Hawaii a little bit longer to get to the actual facts and release those. Figure out what went wrong here. If it really is the case that a single employee could hit the wrong button and send out this kind of alert, obviously that system needs to be redesigned.

And that's why it's so important that we pass a government funding bill that funds missile defense systems both at the takeoff phase on the Korean peninsula but also when they're at their peak in the atmosphere like those we have on the West Coast. Because the simple fact of the matter is, I mean, once a missile gets close to its target, there's a limited number of options that we have. That's why missile defense is so critical.

JOHN DICKERSON: Quickly on this, is it a state thing? Or should it be a federal issue in terms of these warning systems?

TOM COTTON: Well, the military obviously has, through northern command, a very thorough early warning system. And the military never detected any kind of launch. Obviously the states might want to reconsider the way their emergency management system works and link that more closely to the United States military. I think it is appropriate for state emergency management systems though to have these kind of alerts in addition to hurricanes, and floods, and earthquakes, and so forth.

JOHN DICKERSON: All right. Let's move on to immigration. You were in the Oval Office meeting that's gotten a lot of attention this week where the president reportedly used a vulgar and derogatory term. Also there was Senator Perdue. He talked to ABC This Week and I want to get your thoughts about what he said, what he told to George Stephanopoulos. Let's watch.

GEORGE STEPHANOPOULOS: Senator Durbin has been very clear. Senator Graham has told others that the reports were basically accurate. Are you saying the president did not use the word that has been so widely reported?

JOHN DICKERSON: Senator, your view on the use of this one?

JOHN DICKERSON: Sorry to interrupt. You didn't hear the word, or it was not said? Because Senator Graham also told Senator Scott, your Republican colleague, that this is what happened. Senator Flake was in a subsequent meeting right afterwards where he was told by people in the meeting this happened. So just to button that up, you're saying it did not happen or you just don't recall?

TOM COTTON: I didn't hear it, and I was sitting no further away from Donald Trump than Dick Durbin was. And I know--

TOM COTTON: And I know what Dick Durbin has said about the president's repeated statements is incorrect.

TOM COTTON: Senator Durbin has misrepresented what happened in White House meetings before. And he was corrected by Obama administration official (UNINTEL). But here is the point, John. We have an immigration system today that treats people based on where they're from or who they're related to. Not who they are. That's not the system we need.

When Senator Durbin, Senator Graham came to the Oval Office and proposed not to fix that system but to expand it, to create more quotas, more set-asides for other countries, yes, the senator; the president reacted with pretty tough language, as he said, because we want to move to a system that treats people for who they are. Not where they're from.

JOHN DICKERSON: But isn't that precisely the problem here, is that, the president, in the sentiment, leaving aside the word, the sentiment behind it, which Senator Graham thought was strong enough that he rebutted it according to accounts of meeting-- the sentiment is to treat people based on where they come from--

JOHN DICKERSON: --not who they are? The countries they come from. These African countries or Haiti. So that's treating people in a big ol' basket. Not as who they actually are. And that was the sentiment- forgetting the word for a moment, that's the sentiment the president was expressing.

TOM COTTON: John, it's the exact opposite. That's what Senator Durbin and Senator Graham are doing. What I'm trying to do and what Senator Perdue wants to do, what the president said he supports, is treat people for who they are. That's why we want to move to a skill-based system.

So if you're a doctor, or a scientist, or a computer programmer, it shouldn't matter whether you come from Nigeria, or Norway, or any other country on this earth. Today though we have a system that rewards ties of blood, ties of kin, ties of clan. That's one of the most un-American immigration systems I can imagine. That's why we're trying to fix it.

JOHN DICKERSON: The president and White House officials, have said, leaving the word aside, they said he used strong language. Help me understand the strong sentiment about why people who come from African countries and Haiti should not be allowed in and the strong sentiment for why people from Norway should be allowed in. What's the policy sentiment the president is supporting there if not to put people in baskets based--

TOM COTTON: John, the point is that country of origin quotas are arbitrary. And they treat people based on where they're from, not who they are. Today, for instance, over 300,000 Indians are waiting to immigrate to this country. They can't do so because we have arbitrary caps on the countries from which people come.

If you change our immigration system to a skills-based system that respects and treats people for who they are as individuals as opposed to residents of a certain country or relatives of certain people in the United States, it's a system that is more in keeping with American values.

JOHN DICKERSON: So then in this notion of American values, which is what is at the heart of this debate, because what people need to know is that their president isn't judging people based on the color of their skin but based on those skills that you talked about. So can you say then that the president in your conversations, in this specific one, was not grouping people based on the countries they came from, that that was sentiment was nowhere in anything he said? Not the words but the sentiment from him, that that was absent from his mind or anything he said?

TOM COTTON: John, what Senator Durbin and Senator Graham propose is to expand our country of origin and quota-based system. The president reacted strongly against that, as he should. And I do as well because we want to get away from a country of origin system that treats people as Nigerians--

TOM COTTON: --or Norwegians and treats them as individuals, as doctors, and scientists, and computer programmers, and so forth.

JOHN DICKERSON: I understand your sentiment. You're quite clear on that. But the president's sentiment, you're saying in all these meetings there was never an instance in which he did what you're saying--

JOHN DICKERSON: Where he grouped people in that fashion.

TOM COTTON: John, in his tweets, in his interviews, in his public statements, just Tuesday when we had the large meeting in the cabinet room, he repeatedly insists that we need to move to a skills-based system.

JOHN DICKERSON: But you were in the room where it happened. So you're saying in that room you didn't hear any of this sort of lumping everybody together. Is that what you're saying?

TOM COTTON: I did not hear derogatory comments about--

JOHN DICKERSON: But the sentiment.

TOM COTTON: --about individuals or persons, no.

JOHN DICKERSON: Okay. So the sentiment is totally phony as well that is attributed to him?

JOHN DICKERSON: Okay. Senator Cotton, thank you for helping us narrow - nail all that down.

1/2: Face The Nation with Margaret Brennan