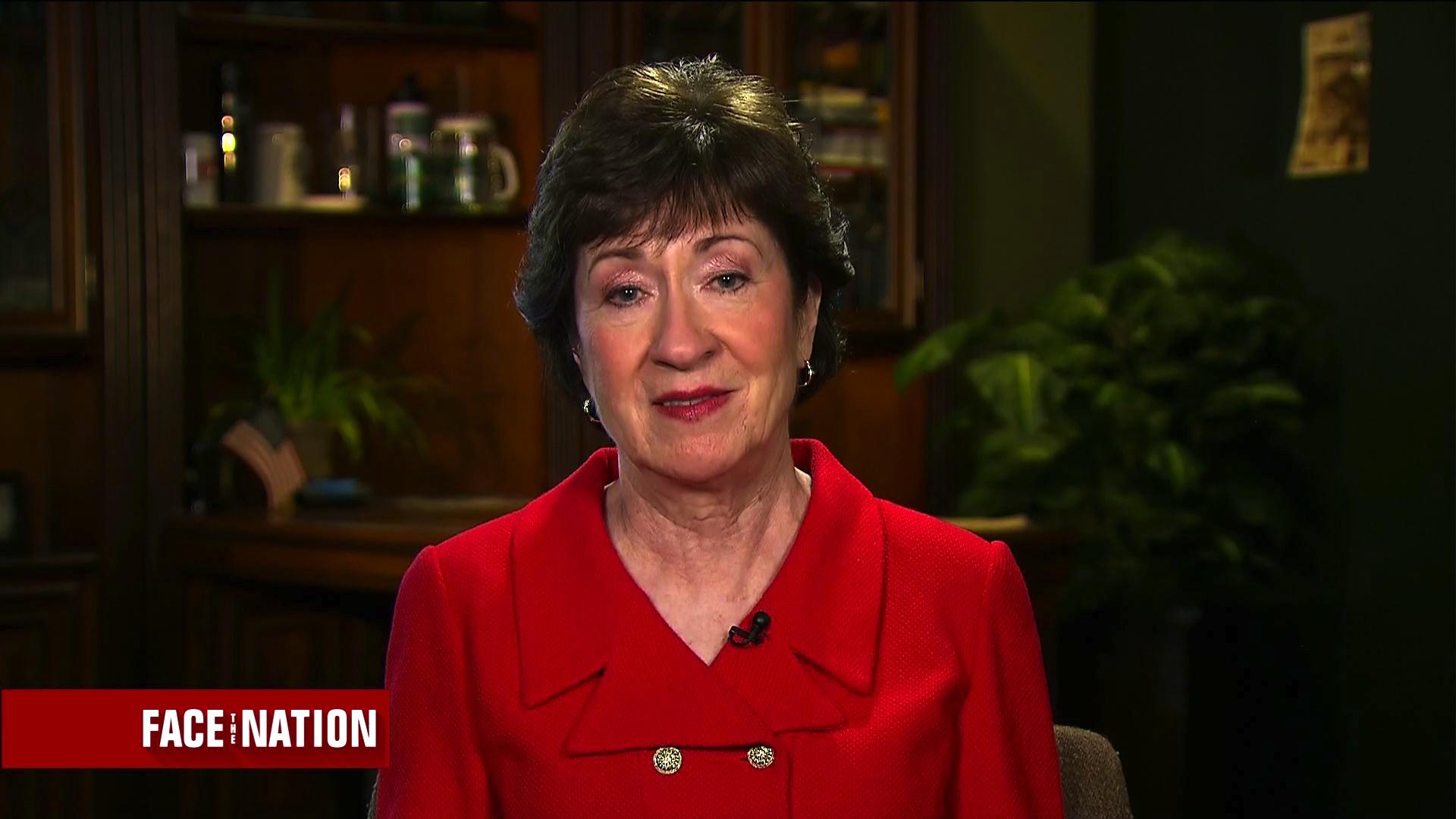 The federal grand jury being used by special counsel Robert Mueller in the investigation into Russian meddling in the 2016 presidential election has approved the first charges stemming from the investigation, sources have told CBS News.

On Sunday, "Face the Nation" asked Sen. Susan Collins, R-Maine, about the development and if there is any sign of collusion between President Trump's campaign and the Russians.

JOHN DICKERSON: --another Republican, Maine's Susan Collins. She sits on the Senate Intelligence Committee, one of the Congressional committees investigating Russian attempts to influence our elections. Senator, given that experience and the interviews and work you've done on that committee, uh what-- how do you process this news about sealed indictments from the special counsel?

SEN. SUSAN COLLINS: Well, from the very beginning this investigation has gone along two tracks. One is the independent counsel's investigation to see if there's criminal wrongdoing, and it looks like we're going to find out as early as tomorrow about some indictments in that area. The other has been the Intelligence Committee's evaluation of the extent of Russian meddling in the last election.

And to try to, along with the independent counsel, answer the question of whether or not there was any collusion between members of President Trump's campaign team and the Russians. We are having a very interesting hearing this week looking at the Russians' use of social media to influence the elections and sow the seeds of dissension in our country.

JOHN DICKERSON: Any sign of collusion after all these interviews, all this time?

SEN. SUSAN COLLINS: I have not yet seen any definitive evidence of collusion. I've seen lots of evidence that the Russians were very active in trying to influence the election.

JOHN DICKERSON: Let me ask you about this so-called dossier, which is information that was gathered of all kinds about Candidate Trump. The Washington Post reported this week that the Clinton campaign and the Democratic National Committee donated-- paid for part of its creation. John Podesta, the Clinton campaign manager, and Debbie Wasserman Schultz came before the Senate Intelligence Committee and said, "We don't know who paid for this." Well, that was before this Washington Post report. Sitting next to Podesta was the lawyer from the Clinton campaign who paid for the report. So these guys need to come back, and sit down, and tell the committee what's up?

SEN. SUSAN COLLINS: They absolutely need to be recalled. It's difficult to imagine that a campaign chairman, that the head of the DNC would not know of an expenditure of this magnitude and significance. But perhaps there's something more going on here. But certainly it's worth additional questioning of those two witnesses.

JOHN DICKERSON: And uh what about the--

SEN. SUSAN COLLINS: And the lawyer.

SEN. SUSAN COLLINS: Absolutely. He more than anyone.

JOHN DICKERSON: Let's go now to the criticisms from Senator Corker and Senator Flake this week. Senator Flake in particular had a message it seemed for his Republican colleagues. And he said basically, "Don't be complicit." What did you make of that message?

SEN. SUSAN COLLINS: Well, first let me say that Jeff Flake's one of my best friends in the Senate. I have enormous respect for him. And I'm really sorry that he's not going to be running for reelection. The Senate will be a lesser place without his being in it. Having said that, I think we need to accept that Donald Trump is our president.

JOHN DICKERSON: Senator Flake would say that there is some responsibility though even while you're trying to get things done to call out those things the president does that might get in the way of you getting things done.

SEN. SUSAN COLLINS: Absolutely. And I have not hesitated to disagree with the president, whether it's with his comments after the incidents in Charlottesville or on the very important healthcare issues. So I'm going to continue to do that. I'll work with the president and support his policies when I think he's right. But I will not hesitate to oppose him when I think that he is misguided.

JOHN DICKERSON: The next big issue with which you may have a disagreement or total agreement with the president is tax cuts. What are you looking for in this that concerns you or that you'd like to make sure that's in this package?

SEN. SUSAN COLLINS: Three major principles will guide my evaluation of tax cuts, which I do think we need. First, I want the tax code to be simpler, fairer, and more pro-growth. And that's really important. We can lift standards of living for working families in this country. We can help small businesses create jobs. And we can have a beneficial impact on the economy as a whole if we do tax reform right. So far I'm encouraged by the discussions that I've had with the members of the Senate Finance Committee. And I'm hopeful that we can put together a package that will attract some Democratic support, too.

JOHN DICKERSON: What about the deficit effects of this though? You in the past have asked for-- have been against some tax cuts because of the effect on the deficit. In this case a lot of people are calling alarms.

SEN. SUSAN COLLINS: That's why it's important that this tax reform package be pro-growth. And if you look at the Congressional Budget Office analysis, if we have just 4/10ths of 1% increase in our GDP, which is entirely realistic, it will coverage the cost of the tax reform package.

JOHN DICKERSON: Final question I want to ask you. Congresswoman Jackie Speier came forward on Friday. She had been a House staffer. And she talked about the sexual assault that she experienced 40 years ago. And she says that this kind of misconduct is still rampant on Capitol Hill. You were a staffer once. What was your reaction to this?

SEN. SUSAN COLLINS: I have not witnessed that. But that doesn't mean that it isn't occurring. I think we're seeing that there is sexual harassment and even assault in virtually workplaces across the country. So that's something that certainly all of us need to work on. But it's not something that I personally experienced.

JOHN DICKERSON: All right. Senator Collins, thanks so much for being with us.

Transcript: Kara Swisher and Scott Galloway on "Face the Nation"
Thanks for reading CBS NEWS.
Create your free account or log in
for more features.
View CBS News In
CBS News App Open
Chrome Safari Continue
Be the first to know
Get browser notifications for breaking news, live events, and exclusive reporting.