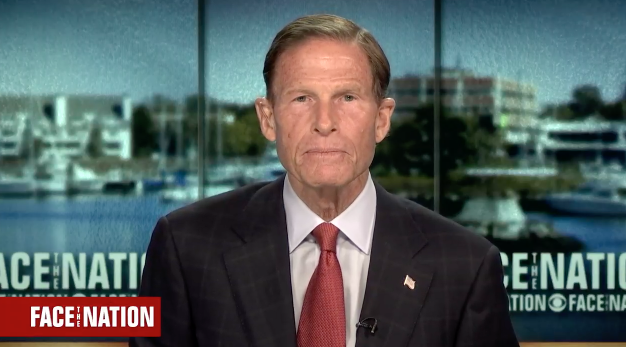 The following is a transcript of the interview with Sen. Richard Blumenthal that aired Sunday, July 1, 2018, on "Face the Nation."

MARGARET BRENNAN: We turn now to Connecticut Democrat Senator Richard Blumenthal. He sits on the Judiciary and the Armed Services Committees. And he joins us this morning from Stamford, Connecticut. Welcome to "Face the Nation," senator. Because you sat on Armed Services I want to give you a chance to respond to what you just heard from Ambassador Bolton, some news there both on North Korea and on Russia.

SENATOR RICHARD BLUMENTHAL: This meeting in Helsinki is deeply alarming. Let's remember that Russia is an enemy and an adversary continuing to attack our nation through cyber and social media, posing a direct threat in the 2018 elections. Donald Trump seems to be the only American in public office who has refused to acknowledge explicitly their attack in 2016, they continue to invade Ukraine, and they support a war criminal in Syria who continues to attack his own people with chemical weapons and the failure to make the Russians pay a price and legitimizing Putin, a KGB thug, with this meeting is very dangerous and the North Korean situation they're now building their nuclear capacity and devising ways to deceive the United States. The concessions we've made in canceling those military exercises with our allies in that region obviously have been met with mockery of those concessions. The same danger exists in the Helsinki meeting with Putin.

MARGARET BRENNAN: Senator I want to move onto Judiciary and the question of this new Supreme Court nominee. We've yet to hear who it will be. But Senate Majority Leader Mitch McConnell says he wants whoever it is on the job by the beginning of October. That could mean a conservative court for the rest of your lifetime.  Is there any nominee that you would vote yes on?

SEN. BLUMENTHAL: The president has said that he will appoint someone only if he or she would quote "automatically overturn Roe v. Wade" and rollback-

MARGARET BRENNAN: Well he now says he won't even ask that question.

SEN. BLUMENTHAL: He doesn't need to ask that question because those nominees on his list have already been screened by the Federalist Society and the Heritage Foundation and other outside groups. And he's made it an additional condition that his nominee also commit to rolling back the protections on health insurance, like those for the millions of people who suffer from preexisting conditions. Margaret, I was a law clerk to Justice Harry Blackmun on the United States Supreme Court the year after he wrote the opinion in Roe v. Wade the majority opinion. I've argued cases in the United States Supreme Court. Four of them. I've never seen a court that is so polarized and so politicized. This decision will shape the court for years to come, and it could lead to criminalizing reproductive rights as they were prior to Roe v. Wade. Women were prosecuted and women died and women were denied access to contraception and the morning after pill. And the same with the health insurance protections. These are real lives, real impacts. And, you're absolutely right, the shape of the court will be determined for decades to come.

MARGARET BRENNAN: Do you regret, sir, your vote back in 2013 to eliminate the filibuster for all federal judicial nominees. I mean that- there was a carve out at the time for Supreme Court. Then Mitch McConnell changed that in 2017. But do you think that was the precedent that has now set the stage- for this vote to happen in the way it will?

SEN. BLUMENTHAL: There was really no precedent because that change in rule applied to the lower courts, the courts of appeals and the District Courts. The Supreme Court is very different, and I'm deeply troubled by the prospect of the president of the United States appointing now a justice who will be the swing, crucial vote not only on reproductive rights and workers' rights and civil rights, but also--

SEN. BLUMENTHAL: I believe that it was the right decision at the time because it enabled us to move forward. But the president should not be permitted to appoint a justice who will decide whether or not he complies with a subpoena to testify before a grand jury, or pardons himself. I believe that whoever is appointed ought to recuse himself and commit to recusing himself from those kinds of decisions that affect the personal finances or the special prosecutor investigation.

MARGARET BRENNAN: Immigration is also a hot-button issue - that may and already has in some ways come before the Supreme Court. I want to ask you, sir, do you agree with your colleague Senator Kirsten Gillibrand that we should get rid of Immigrations and Customs Enforcement, or ICE as that agency is known?

SEN. BLUMENTHAL: Abolishing ICE will accomplish nothing unless we change the Trump policies. I visited the border about a week ago. I saw the brutality, and inhumanity, and absolute cruelty of these policies, ripping children away from their parents. There is no plan or path to reunify them. It is not happening and the Trump Administration is embarked on a trainwreck: a moral trainwreck, a legal trainwreck, and a humanitarian trainwreck, because the plan now is to put the families together in tent cities, behind fences and other barbed wire, in ways that amount to imprisonment internment just as was done with people of Japanese descent during World War II. That is a policy that is a disgrace to the United States of America.

MARGARET BRENNAN: Senator Blumenthal thank you very much for your time. We'll be back in one minute with a lot more FACE THE NATION. So don't go away.

Gottlieb says Omicron appears to be a "milder strain" of COVID-19, but pediatric danger remains

Cheney says House January 6 panel "will not be deterred"