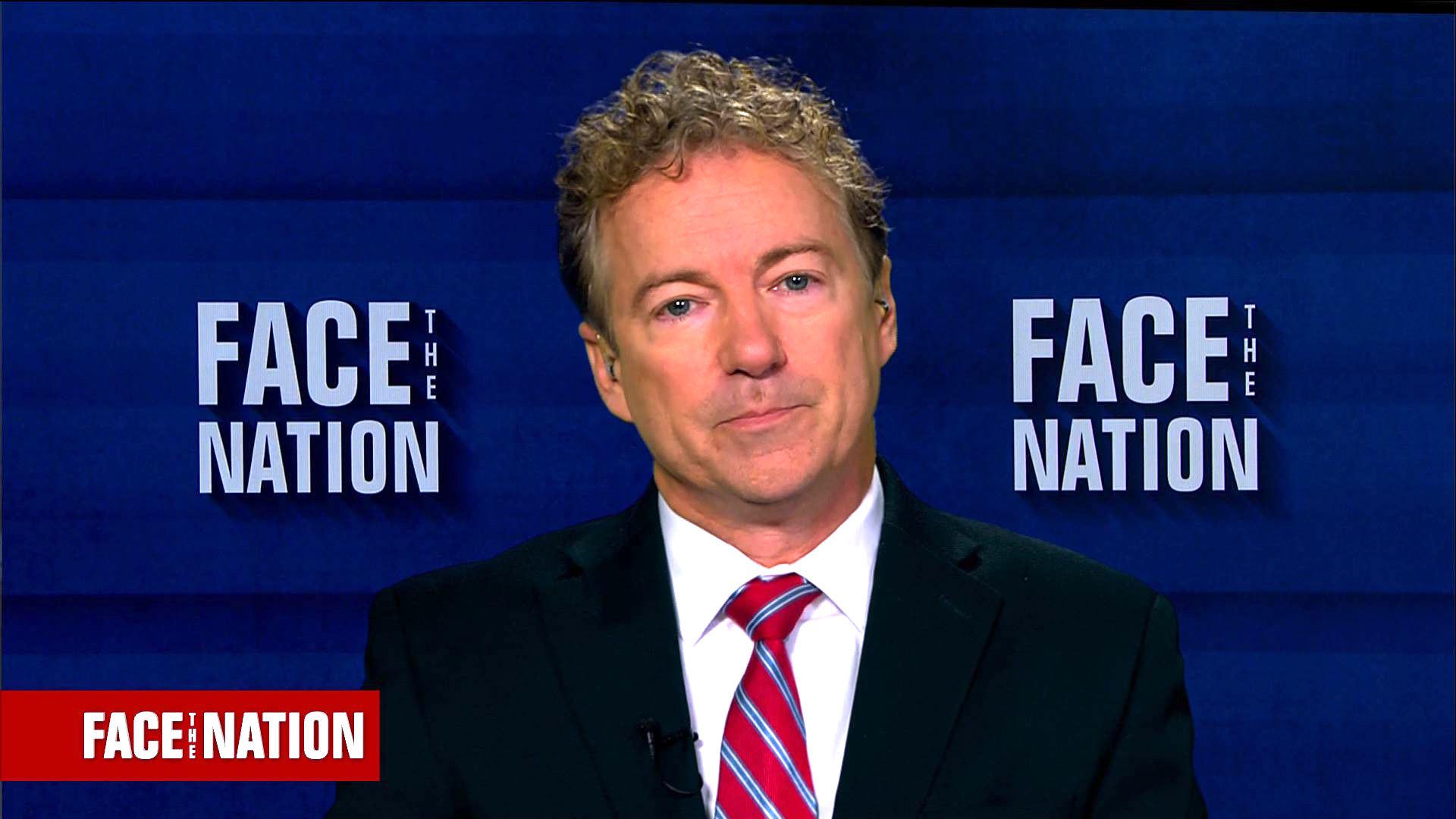 In his first Sunday show appearance since he was injured in an altercation with his neighbor at his home in Bowling Green, Kentucky, Republican Sen. Rand Paul said he was in "living hell" due to broken ribs and other serious complications. Paul told John Dickerson that he couldn't get out of bed without help for weeks following the incident in November.

Paul discussed the altercation and weighed in on several hot-button issues in Washington, including President Trump's fitness for office and the reauthorization of the Foreign Intelligence Surveillance Act, or FISA.

The following is a transcript of the interview with Paul that aired Sunday, Jan. 7, 2018, on "Face the Nation."

JOHN DICKERSON: And we're back with Kentucky Republican Sen. Rand Paul. It's good to have you back, senator. We hope you've fully recovered and, by the way, happy birthday, as well.

RAND PAUL: Thank you, thank you. I was wondering if I'd get any presents today, but I understand that the ethics rules of the Senate won't let me take any presents, but thanks for having me on.

JOHN DICKERSON: That's all right. Well, your presence is our present. Thank you. How are you feeling by the way?

RAND PAUL: A little bit better each day. It was sort of I guess a living hell for the first four or five weeks. Couldn't get out of bed without assistance, six broken ribs, damage to my lungs, two bouts of pneumonia. It was really a tough go of it. But each day I feel a little bit better. This last month I've been doing better.

JOHN DICKERSON: You haven't talked about the motivation for this, but there is an increase. In politics today, things have gotten a little bit uglier. Was that a part of what happened here, and do you talk about that with your colleagues?

RAND PAUL: My colleagues come up all the time, and they want to make sure that there is some kind of deterrent because people don't want to think that it's open season on our elected officials. I was also at the baseball field when we were shot at with semi-automatic fire, and Steve Scalise was severely wounded, and I was ten feet from a young staffer who was shot in the leg.

So yeah, I've been involved in violent attacks twice in the last year. And so, we're very aware of it. And I think one of the things about motivations is people got obsessed, some in the media, about the motivations. But I think really we usually don't ask if someone's raped or mugged or whatever why the person did it. We want punishment and deterrents. And I guess that's what I'm mostly about. I just don't think of any kind of motivation or justification, whether it's political or personal, to attack someone who's unaware from behind in their own yard.

JOHN DICKERSON: Sure. Although, if it's politically motivated, those who are involved in politics might think about changing the way they behave to change that climate.

JOHN DICKERSON: Let me ask you about the climate here in Washington. This new book about the White House, a lot of debate about it. As a politician, the president has responded by talking about his mental stability. Why do you suppose he did that when, instead, he could say: "Forget this book. We've passed tax cuts, we're defeating ISIS, we've nominated a bunch of judges." Why do you think he did that?

RAND PAUL: You know, I don't know. I guess my first response was this was sort of a gossipy book, kind of like a Kitty Kelley book back from when I was in high school. I remember her books would come out and nobody really believed them. They were treated as like a sitcom or treated as a television show.

They weren't really treated seriously by the media. I do think, from my experience, when I look at the president, I've been around the president quite a bit, I've been in the White House quite a bit with him. I can give you one example that I think really shows his great insight and ability to cut through to the chase and do things that ordinary politicians don't do.

And that's when I took him the idea of letting individuals join together to buy insurance across state lines. Every politician, Republican and bureaucrat in Washington, said we couldn't do it, and they hadn't done it in 30 years. He looked at the original law, he told his lawyers, "Look at the original law and see if the interpretation of these previous government attorneys have been correct."

And he had the wherewithal just to say: "No. We're going to let individuals join these groups so they can get cheaper insurance and perhaps better insurance as well and perhaps get insurance for people who don't have insurance." But he did that because he's different than any other politician.

And now we have all these wiseacres out there wanting to criticize and be presumptuous about trying to judge someone's intelligence. I can tell you, he's got the wherewithal to do things that no politician's been able to do and in a good way.

JOHN DICKERSON: Let me ask you a couple of policy questions. We talked about section 702 of the FISA with the C.I.A. director. You have held up a nomination of John Demers, and you're also talking about filibustering this. Why?

But they talk to Americans. So, after you gather millions and billions of bits of information, it turns out there's a lot of Americans in the database. What we don't want to happen is that domestic law enforcement, police and F.B.I. are looking in a database that was collected without constitutional protections.

And let's say they decide to prosecute medical marijuana people in Colorado, which is legal in Colorado, but now the federal government's talking about changing their policy and going after them, what if they're searching a database that was collected on foreigners to get incidental information on medical marijuana in Colorado? I have a real problem with that. So, they should have to get a warrant before they look at that. And really, none of that information should be used for domestic crime, because it was gathered with a less than constitutional standard.

JOHN DICKERSON: So, you have a problem with it. What are you going to do?

RAND PAUL: Well, we'll try to stop them. The people on the other side, the C.I.A. director and others, they want permanent reauthorization, no reform. And when you ask them, "Are you using this for domestic crime?" They kind of say, "Well, we don't do it very often." But they won't tell you where they're sort of looking at the information and then not presenting it in court but using that information to develop what's called parallel construction to develop cases.

They want just permanent reauthorization, which to me means no more oversight by Congress. The reason we need more oversight is that people, as Madison said, "Men are not angels." And we've seen recently how we've had some people in the F.B.I. that had bias against the president.

We also have seen now people in the Department of Justice who were married to people that were doing opposition research on Trump. So, you can see how people are human and bias could enter into this. And the history of the C.I.A. and the F.B.I. are not without blemish.

But now many of us, Senator Wyatt and I have in a bipartisan way looked at this and said, "My goodness, we have to defend the American's right to privacy." And right now, we've sort of a minority in the Senate. In the House, though, it's close to 50/50.

JOHN DICKERSON: All right Senator, we're going to have to leave it there. Thanks so much and happy birthday again.

JOHN DICKERSON:  And we'll be back in a moment.