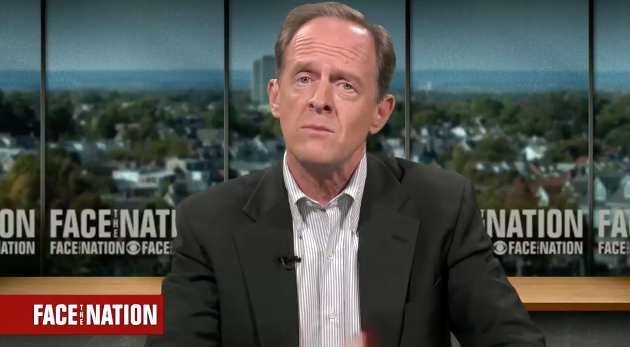 The following is a transcript of the interview with Republican Sen. Pat Toomey of Pennsylvania that aired Sunday, July 1, 2018, on "Face the Nation."

MARGARET BRENNAN: We're back with Republican Senator Pat Toomey. He joins us from Bethlehem in his home state of Pennsylvania this morning. Senator welcome to the program. You just heard Senator Blumenthal lay out his arguments as a Democrat his concerns about a Supreme Court nominee. I want to ask you. He has raised this question of if the special counsel's investigation ever makes it to that court, whether this kind of nominee could become a problem given that the president will be selecting someone who could potentially decide on him.

SENATOR PAT TOOMEY: Margaret, I think that's a ridiculous argument that's made as just an attempt to make wait for their real position which is that President Trump should never be able to confirm a vacancy. Look I don't remember hearing the Democrats making that argument when President Bill Clinton, was in fact personally under investigation when a vacancy occurred. My understanding is that President Trump is not himself personally the subject of the investigation, even. So I think that is a non-argument and we needn't pay any attention to it.

MARGARET BRENNAN: I want to ask you about something you've been very vocal about lately. This is your concerns, your criticism, of the president's trade policies. Today- starting today- Canada is putting tariffs on a number of American made products including chocolate, ketchup, up other items. How much is this going to cost your home state?

SEN. TOOMEY: Well it's going to be harmful to my home state. So far this trade war, if it is that, and it seems to be heading that way has been of a modest scale it hasn't done great damage yet but it has the potential to do that. And it would be an unbelievable pity to disrupt what is really a fantastic economy because of tax reform because of regulatory relief. We've got strong economic growth tremendous employment prospects. So I don't want to see a trade war undo that undo that and limit the ability of Pennsylvanians and Americans generally to buy and sell goods and services with our neighbors and allies which is after all who this is targeting.

MARGARET BRENNAN: You have tried and now failed twice to take back, in Congress, some control over the president's ability to put these tariffs in place, citing national security grounds. So would you withhold your vote to confirm a Supreme Court nominee in order to get the kind of vote you're asking for on tariffs?

SEN. TOOMEY: Now- that won't be necessary. I do want to have a vote to restore to Congress its constitutional responsibility to have the final say on the imposition of tariffs, especially when it's national security that's invoked as the rationale. But there is uniform, I believe, uniform Republican Senate support for us allowing that debate, allowing that vote. Not all of my Republican colleagues agree with me on the substance, but there was no Republican objecting when Senator Corker and I sought to have an amendment, sought to have that vote. It was a Democratic colleague-- colleague reflecting concerns on the Democratic side. Their position is we shouldn't even be able to debate this. We shouldn't be able to vote. But here is the—

MARGARET BRENNAN: Has Republican leadership given you a date?

SEN. TOOMEY: --That- we will have multiple options, Margaret, where there is no procedural opportunity for the minority party to block the vote. We will have this vote, and Senator McConnell and my Republican colleagues are not going to attempt to block the- ability to have that vote. And we'll see where the votes are. We don't know that yet, but I think we should find out.

MARGARET BRENNAN: The president did seem to back down a bit on these investment restrictions that had been floated for China. Do you see him backing down on the question of tariffs?

SEN. TOOMEY: So here's my hope, my hope is that we can persuade the president to focus on the real problem on the trade front. The problem is not Canada. The problem is not Mexico. I mean with Canada we have a trade surplus. We have a surplus even in steel.

So why we should punish my constituents with the tax when they import these small amounts of Canadian steel makes no sense. The real problem is the really bad behavior of China, specifically the theft of intellectual property, coerced technology transfers. What we ought to be doing is make peace with our allies with whom we trade to our mutual benefit, and join forces and deal with the real problem and China poses a real problem. I think the president knows that that's a real problem. And so my hope is that we can persuade him to focus there.

MARGARET BRENNAN: We'll be watching Senator Toomey. Thank you. We'll be back in just one moment.

Full transcript of "Face the Nation" on April 11, 2021
Thanks for reading CBS NEWS.
Create your free account or log in
for more features.
View CBS News In
CBS News App Open
Chrome Safari Continue
Be the first to know
Get browser notifications for breaking news, live events, and exclusive reporting.