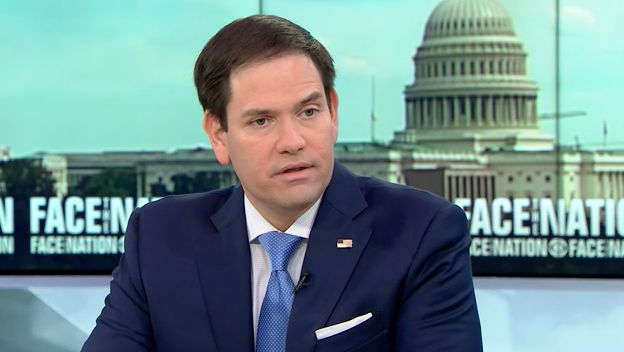 The following is a transcript of the interview with Sen. Marco Rubio, Republican of Florida, airing Sunday, July 22, 2018, on "Face the Nation."

SENATOR MARCO RUBIO: Thank you. Thanks for having me.

MARGARET BRENNAN: Should Vladimir Putin be welcomed to the White House this fall?

SEN. RUBIO: Well I don't have a problem with the president meeting with Putin on the prowl- on the contrary I think it's an important thing that we engage him. I just think it's important that any conversation we have with Vladimir Putin is with the person who he really is. This is a guy who clearly believes- does not believe in a win win scenario with the US. He's a big believer in zero-sum game. He thinks the way to make Russia stronger is to weaken America and as long as we're clear about it, I think it's important that the nations speak to one another and that our leaders speak to one another and I think that most of our European allies have encouraged that. But-but I- it's only productive if we clearly understand who he is and what he wants.

MARGARET BRENNAN: Well given that the Director of National Intelligence says Russia continues to try to influence our election system including these upcoming November races. There is some sensitivity to having Vladimir Putin here in the fall around that same time. you come from a very key state of Florida, Have you seen any evidence in your home state of election meddling or influence?

SEN. RUBIO: Well I'll be careful because I'm on the Intelligence Committee. Suffice it to say that I've been warning consistently that I believe they'll do this again. I think they've learned from 2016 methods and- and different tactics that I believe they'll utilize again whether it's in 18, 20 or 22 but they'll do it again and they'll be better at it. So I strongly urge every election official in America to take advantage of all the resources provided to them and available to them from the Department of Homeland Security and other federal agencies--

MARGARET BRENNAN: Is enough being done? And being offered?

SEN. RUBIO: Well you could always do more. And one of the impediments we have and we're working through is the fact that in many of these elections departments still in some parts of the country there are not a clear official that you can share classified information with. Suffice it to say no election official in America or in my home state for that matter should be overconfident. You're dealing with the capacity of nation states and it's not about changing votes. It's about creating chaos by for example deleting people from the voter rolls and the like. So we really need to take that very seriously.

MARGARET BRENNAN: This morning the president is tweeting and accusing the Justice Department and the FBI of misleading courts and illegally spying on his campaign. He's pointing to the release of these documents about a campaign associate Carter Page who the FBI believed when they were surveilling him to have some ties to the Russian government. You have said before on the record that you had not seen evidence of the FBI spying on the Trump campaign. Do you still believe that?

SEN. RUBIO: Yeah, I have a different view on this issue than the president and the White House. I don't-They did not spy on the campaign from anything and everything that I have seen. You have an individual here who has openly bragged about his ties to Russia and Russians and he's never- I don't think Carter Page has ever said he's a spy but he has certainly talked about it. And the FBI's job is to protect this country from-from threats like and- and to lead our counterintelligence--

MARGARET BRENNAN: So the surveillance was justified is what you're saying?

SEN. RUBIO: So they look at all this information and say we have a guy here who is always in Russia, brags about Russia, and we have reason to believe and they list those reasons why this is someone we should be watching and they follow the legal process by which to do so. I think that's different from spying on a campaign, in fact that the Trump campaign has said on numerous occasions that Carter Page was not a major player in their campaign. So you know based on that statement alone you would conclude that yes they were looking into this one individual but an individual the campaign themselves said was not a big part of their efforts. Therefore I wouldn't consider that spying on a campaign.

MARGARET BRENNAN: We started this week though with- with concern even from you that the president was really slamming his own intelligence community or at least not defending them. And again today he is hitting the Justice Department and the FBI and accusing them of illegal behavior.

SEN. RUBIO: Well so on the intelligence committee- community I think they did- their assessment of 2016 is accurate. It's 100 percent accurate. The Russians interfered in our elections. Not only that I believe that will do so again in the future, and it presents the sort of a unique situation. On the one hand, the Trump administration's policies on Russia have been tougher than anything anyone could have imagined. They've provided defensive capabilities, offensive capabilities, lethal weapons to Ukraine. Again this week sent more. Their sanctions have exceeded what many in Congress have even asked for. And then you have moments-

MARGARET BRENNAN: Which is why the president seems incongruous. His comments don't
match that.

SEN. RUBIO: --Right. And so then you have those statements. And I think it was not a good moment for the administration obviously. Hopefully something like that never happens again. But I think it's important to focus on the policy, which ultimately is what matters. The rhetoric could influence policy and undermine policy, but I don't think we've reached that point here with this. The most important thing I think we need to focus on now is deterring future attacks by putting in place immediate sanctions that take hold if they do this again.

MARGARET BRENNAN: And you've got a bill--

MARGARET BRENNAN: --proposing something along those lines but there's no date set for that.

SEN. RUBIO: Well obviously now, I mean, this is a major piece of legislation. These sanctions that we're talking about are devastating, and so we want it to be done the right way. And so that- therefore we've asked the committees of jurisdiction, which is the Foreign Relations Committee and the Banking Committee to hold hearings so we can get moving on it.

MARGARET BRENNAN: So you expect hearings but no vote anytime soon?

SEN. RUBIO: Well the leader has said- Leader McConnell said- he wants a vote. Leader Schumer has said he wants a vote. So usually when the majority and the minority leader of the Senate say they want to vote on something it usually gets voted on.

MARGARET BRENNAN: Were you really satisfied with what the- what has been characterized as a walk-back by the president, changing "would" to "wouldn't." Is it really two letters that was the issue for you?

SEN. RUBIO: Well, a bottom line is that I'm glad he said what he said, because it left the impression that somehow we were siding with Putin versus our intelligence agencies. So it was important that he do that. At this point, we can't go back and change what happened. It was not- as I said it was not a good moment, but it was what it was. We need to move forward from that with good public policy. And- and part of that is, I think, standing with our intelligence community. At the end of the day, I am never going to side with Vladimir Putin, we should never side with him against our own government and against our own people. Here- no matter what you are, Democrat or Republican, we wouldn't want any country in the world involved in trying to influence the outcome of our elections or the direction of our elections. We should never be tolerant of any country in the world coming into our own country and trying to pit us against each other. We wouldn't tolerate that of France. We wouldn't tolerate it of Luxembourg. Why would we tolerate that of Russia and Vladimir Putin?

MARGARET BRENNAN: Alright Senator. Thank you for your time. Thanks for being here. We'll be back in one minute with a lot more Face the Nation. So, don't go away.

What kids can understand about race