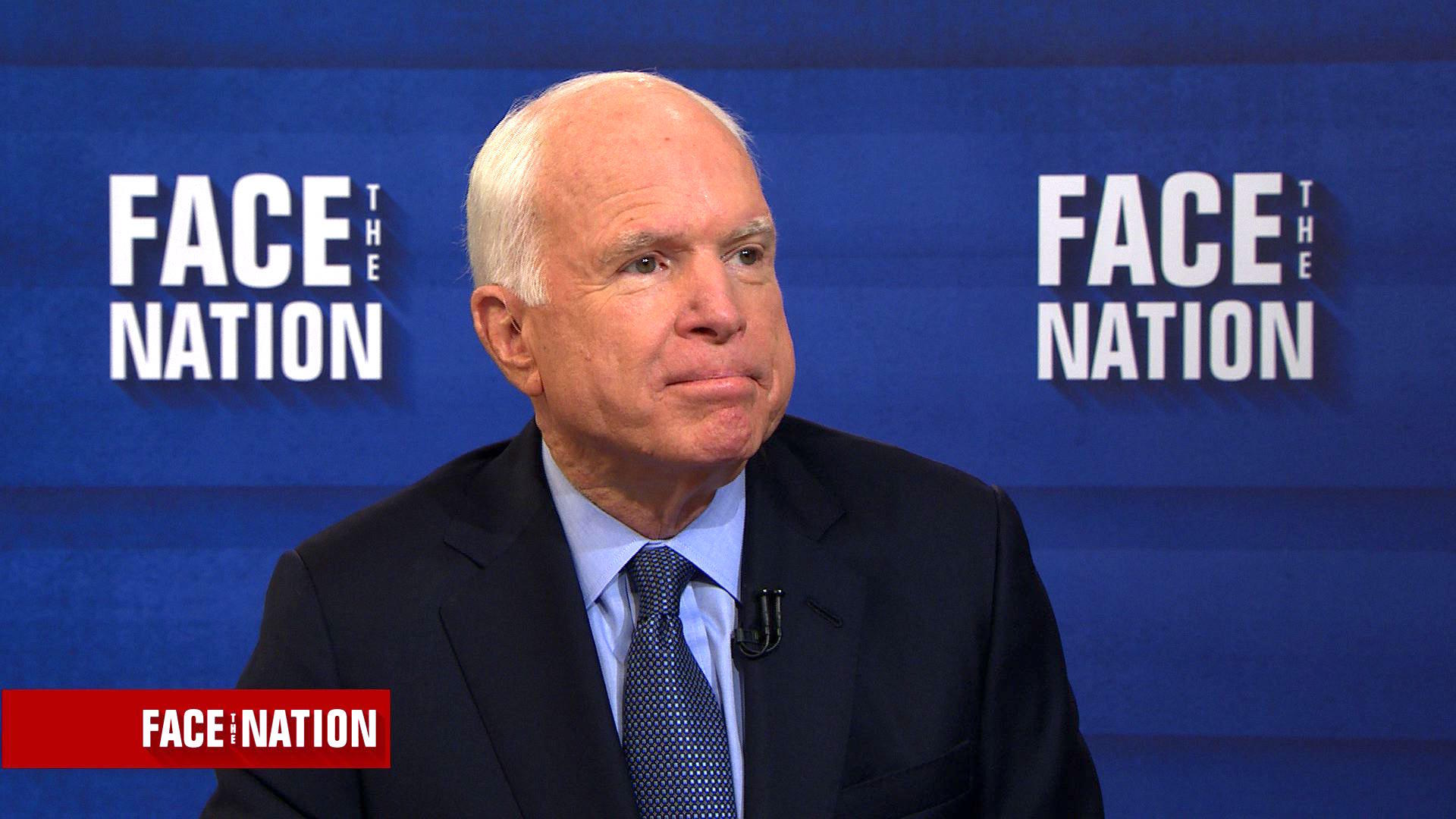 Sen. John McCain, R-Arizona, the chairman of the Armed Services Committee, joined "Face the Nation" Sunday. He discussed North Korea, the Senate's work on the defense authorization bill -- and more.

What follows is a transcript of the interview with McCain, which aired Sunday, Sept. 17, 2017, on "Face the Nation."

JOHN DICKERSON: And we're back with the Chairman of the Senate Armed Services Committee, Senator John McCain. Senator, welcome. Your reaction to the Secretary of State, the U.S. wants to sit down at the table with North Korea, but North Korea doesn't stop testing?

JOHN MCCAIN: Well, you know, it's a - this is one of the longest standing crises that we have faced. Three previous administrations have tried to make deals with North Korea in order to stop the steady progress they've been making towards the acquisition of nuclear power-- excuse me, nuclear weapons, and the means to deliver them. And I'm -  I'm all for us going back to the table. But I - I'm not sure that we aren't facing a serious situation here of two options: 1) a nuclear-armed North Korea, or war with North Korea as, as - so we would prevent them from the further acquisition.

So it seems to me China is very important, and yet we can't revisit that same old scenario we have before. So we're going to have to do a number of things, including incredible emphasis on missile defense in South Korea. And our own missile defense system, since there is the scenario and you, you never know exactly where it is, where they could strike the United States of America and Alaska. That is - both of those are unacceptable options. So, I think missile defense, I think trying to influence China to rein in their behavior, which China has never done, is - this is probably one of the most serious international crises, national security - security crises we've faced.

JOHN DICKERSON: Give me your assessment of the administration. Secretary Tillerson suggested today that all of this is backed up by a swift military capability. Everybody's talked about how tough those options are. But give me your sense of how soon that capability could be put into operation. I mean, other analysts have said it would take a long time for the U.S. to actually move militarily. What's your sense of the timeline?

JOHN MCCAIN: I think it's difficult but I think we are making sure that we have the capability as far as militarily in South Korea. But also the emphasis now has to be on missile defense to a large degree. I - I have great confidence in our capability to develop counter-missile capability. We don't have that right now, when some analysts are saying that they have, already, the capability to hit the United States of America.

JOHN DICKERSON: You're working very hard on the defense reauthorization in the Senate.

JOHN DICKERSON: Let me ask you about this. There have been a number of incidents, eight so far this summer, including one on the U.S.S. John McCain, named after your father and grandfather. You said this on the Senate floor this week. This is you. "We are killing more of our own people in training than our enemies are in combat." Why is that happening?

JOHN MCCAIN: It's because of a thing called sequestration, and our failure over the last eight years to make sure our military is prepared, equipped, trained. Whenever you cut defense capabilities, the first thing that goes is the training and the readiness, and because that's easy enough to cancel. If it's a new weapons system or something of significant impact, then that's a lot harder. So the first thing that goes is that.

And so our readiness continues to suffer. And the training that, that they need very badly is not there. And I would add to that, adding on all this political correctness stuff, with a shrinking military, when you really look at the, how much time they have at actual training and readiness, it's continued to shrink. So we have accident after accident after accident. We are killing more Americans in uniform in training than we are in engagement with the enemy. That's, that's not acceptable.

JOHN DICKERSON: Can that be fixed in the defense reauthorization that you're working on?

JOHN MCCAIN: It can be fixed in the defense authorization as far as authorizing. The appropriations, the money side, is still on the decline, and we have to fix that. And I would quote no less an expert than the chairman of the joint chiefs of staff who said, "If we don't turn this around within five years, our adversaries will have caught up with us in capabilities."

Don't we have a responsibility to these young men and women and their families? I called the families of the ten that were killed on the U.S.S. McCain. I'll tell you, that is one of the most heartbreaking things that, that you can do. And so if we're going to ask young men and women to voluntarily serve in the military, we better - our part of the bargain is to provide them as much as we can and as much as they need in order to operate in the most safe manner.

JOHN DICKERSON: You supported on Friday a bill that would prevent President Trump from implementing a ban on transgender.

JOHN DICKERSON: What - Give me your opinion on that--

JOHN MCCAIN: Well, first of all, I think that transgender people are in the military. And to somehow tell them, along with the Dreamers, that they have to leave the military, which is short of qualified personnel, I believe that a study-- I know that a study is going on right now conducted by General Mattis as to the whole issue. One, we wait until that is completed.

And finally, what do we tell those young men and women who are transgender that are serving? That, that they're out? Same thing with the Dreamers. There's 900 Dreamers in Iraq and Afghanistan right now. What if we tell them - what are we going to do? Go to them and say, "Hey, pack up, you have to go back to El Salvador"? That's just not fair.

JOHN DICKERSON: Quickly, two other issues. One, the president's working on bipartisan approach. What do you make of that?

JOHN MCCAIN: I am interested in that, of course. We - this president is always full of surprises. But the problem is, John, it shouldn't be bipartisan sh-- it should be both Republican, Democrat and the president. So yes, he surprised the, the Republicans with the deal that he made with Chuck and Nancy. With Chuck and Nancy.

What should take place is the three of them, both leaders, Republican and Democrat, and the president sit down and say, "Okay, we've got a problem here. We need to fix it. And that means that we can come up with, all three of us, in one solid proposal." Why did - why did Obamacare fail? Obamacare was rammed through with Democrats' votes only.

Are we going to ram through our proposal with, with Democrats and the president? That's not the way to do it. We got to go back. If I could just say again, the way to do this is have a bill, put it through the committee. We have Patty Murray and Lamar Alexander are doing fine - bring it to the floor. Have debate. Have amendments. We passed our bill 27 to nothing for the Armed Services Committee--

JOHN MCCAIN: I have more to say!

JOHN DICKERSON: We'll get you back then.

JOHN DICKERSON: We'll be back in a moment with Ken Burns and Lynn Novick, co-directors of the new PBS film, the Vietnam War. Stay with us.

JOHN MCCAIN:  And don't miss it.