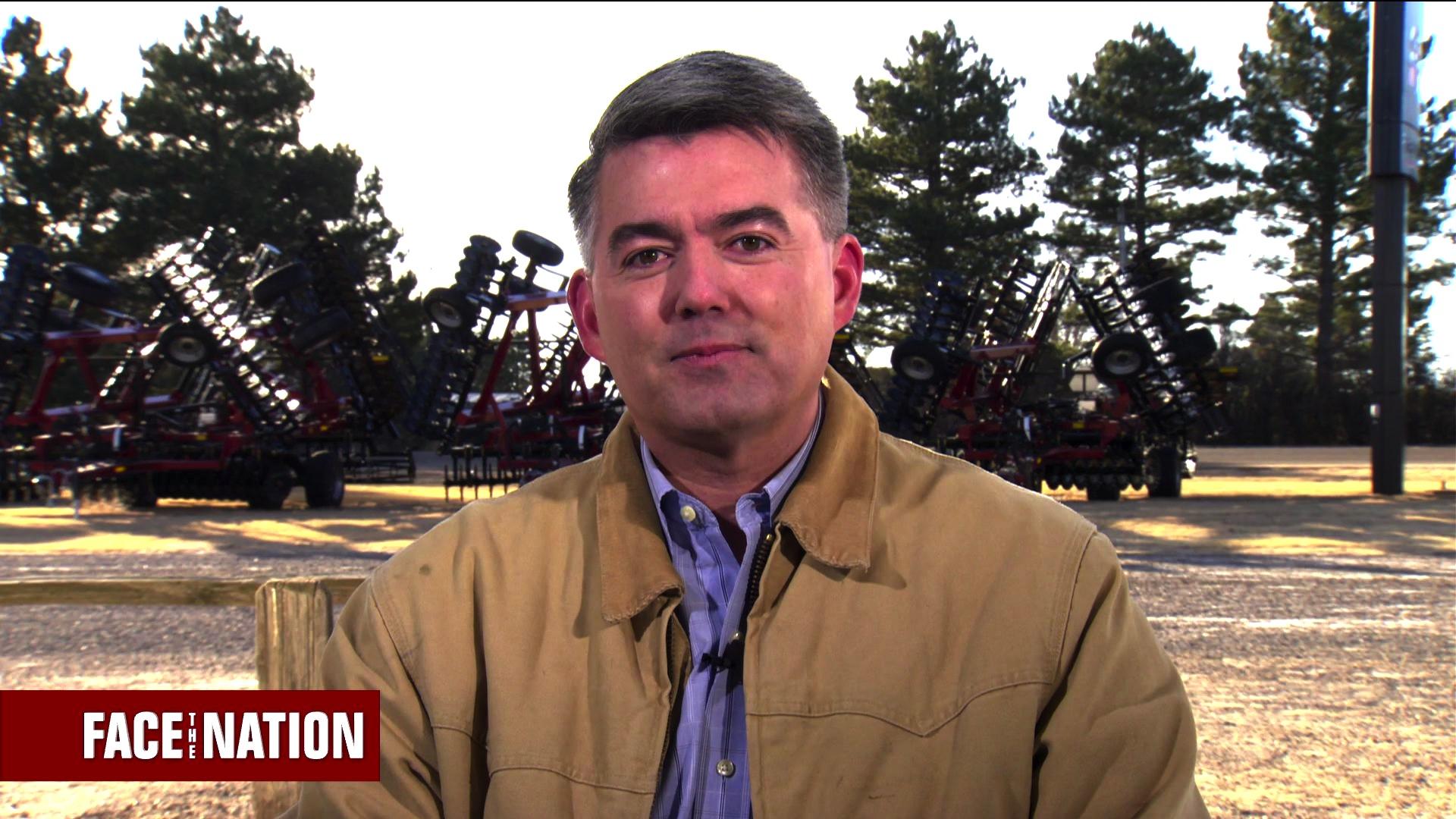 Efforts to reach a deal on immigration and government spending to prevent an impending shutdown were thrown off track following the president's remark during a meeting Thursday in which he questioned why the U.S. accepts immigrants from what he called "sh*thole" countries. Mr. Trump tweeted on Sunday that a deal on DACA, the program that protects undocumented immigrants who came to the U.S. as children, was "probably dead," blaming Democrats for the breakdown in negotiations.

Republican Sen. Cory Gardner of Colorado joined CBS News' "Face the Nation" to discuss the potential solutions and hurdles lawmakers face in discussions over spending and immigration reform. Gardner, a member of the Senate Foreign Relations Committee and the head of the National Republican Senatorial Committee, also weighed in on Republicans' prospects in the 2018 midterms.

The following is a transcript of the interview with Gardner that aired Sunday, Jan. 14, 2018, on "Face the Nation."

JOHN DICKERSON: We turn now to Republican Senator Cory Gardner, who joins us from his family's tractor dealership in Yuma, Colorado. Senator, thanks so much for being with us. You heard Senator Cotton say this was not the sentiment or the word that was used. Nevertheless, the Wall Street Journal has a headline that says that this moment may imperil a deal on- on DACA. What do you think- Where do you think things stand between Republicans and Democrats who are trying to put a deal together here?

JOHN DICKERSON: Do you think just- this word obviously rocketed around this week. It's also obviously now an international point of conversation. If Senator Cotton is right and Senator Perdue is right, and Senator Durbin made this up, that's a pretty extraordinary thing. You've now got people in the president's own party saying it's a racist comment. If-if another senator makes up something that causes people to come to that judgment, that's a pretty serious thing.

SENATOR CORY GARDNER: Well, look, I'm not going to get into the- the who-said-what-said, but what was reported is unacceptable. But what we have to do is not let that define this moment. Look, we have a very, very serious challenge in front of us. It's a challenge that the president laid out very clearly this past week.

It's a challenge that I think members of the House, the Senate, Republicans and Democrats, want to address and have to address. And so, we can't let this moment's politics defeat the important policy choices ahead of us. Look, we put together a very responsible plan, and if people want to better that, if people want to improve that, then let's do that.

Look, so much of what I hear talks about the second part of this conversation, that the president talked about can be in phase two of the immigration debate. What we're dealing with right now are children who were brought here as children, through a very young age, no fault of their own. That's what we can address.

Look, I just am so worried that what happens in Washington is this, that people let the politics of the moment, they go to their collective corners, their prospective corners, and then they stop talking about the policy that we have to address. This is a chance for us to prove to the American people that we can help meet what the president talked about, do them in a way that is beneficial to border security, that improves border security, do it in a way that addresses these children who were brought here through no fault of their own, and actually have a solution that America can be proud of.

JOHN DICKERSON: Do you think Democrats are going to act in good faith? Well, A, have they acted in good faith in the negotiations you're talking about primarily? And then secondarily, after we've gotten to this Oval Office moment, you know there are a lot of Democrats who are trying to make all Republicans pay for it. Is that- Do you think the other side of this negotiation is going to avoid the politics you've just described?

They know we can do better than what we're doing right now. And this first four-part deal that we've put together starts to begin- it begins to address the challenge in front of us. This isn't going to solve everything at once, but it does solve a very important piece, and then we can build trust with the American people that we've done our jobs, we've improved security, we've fixed the challenge these dreamers face. And we can do it in a way that the president signs, with the majority of Republican and Democratic support. And let the people who want to play politics, let them play politics, but that's not what this moment is about.

JOHN DICKERSON: You know, and the president, in that meeting that were at, the public meeting, suggests- he said, "You know, I'll sign whatever you bring to me. I'll take the heat." He seemed to be kind of on the side of the argument you're now making. Has that sentiment, as expressed in that meeting, survived the sausage-making process and-and- because it sounds like what you're describing is what he wants and therefore he should sign it quickly?

SENATOR CORY GARDNER: Well, to the president's credit, every time I've had a conversation with him in recent months, he's talked about a need to find a solution on this DACA population, you know this-this hundreds of thousands of people in America that are a part of DACA right now.

He's talked about the need to bring a solution for the dreamers. He's talked about working to do it, so I have no reason to doubt him, even today, despite the- the blow up that we had this past week. I do think he's sincere and I do think sincere people, with letting our better angels prevail, will come together with a solution. So, this is a chance for us to say, hey, look, we're not going to let this moment leave us without a solution.

JOHN DICKERSON: We've talked a lot about politics getting control of things, but you are in charge of helping Republicans get elected in politics. There was a town hall where Senator Grassley, a Republican from Iowa, held back in- in Iowa, and the Des Moines Register said it was basically focused entirely on the president, one person asking if the senator felt like he was being held hostage by President Trump. How is it going to be for Republicans running, with President Trump as president, in these elections that you're in charge of?

But what we can't do is try to shout each other down, to continue to fail to listen to each other, to listen to the legitimate concerns that people have. Look-

SENATOR CORY GARDNER: It's time we listened to each other in this country and do the right thing.

JOHN DICKERSON: Okay, Senator, we're going to have to end it there. We'll be talking about 2018 again. Thanks so much--

JOHN DICKERSON: --for being with us. And we'll be back in one moment with West Virginia Democrat Joe Manchin. Stay with us.